This weekend I welcome Tessa Stockton who is sharing a first meeting from her fantasy romance novella called Wind’s Aria. I have to admit to being totally envious of Tessa’s awesome author picture, so I had to show it right away! She looks very wise and creative, doesn’t she?

Anyway, on to Wind’s Aria. First, Tessa sets up the scene for us.

Setup of Scene:
The Il Bora, a magnificent winged creature is charged with the task of dooming the young maiden, Aria, the chosen Songstress, by stealing her voice. If Aria is unable to sing from the sacred platform every dawn, something she was elected to do, peace and abundant life will no longer belong to her people. Only death and destruction will follow. When Aria falters in song, a grave mistake, it’s not because the Il Bora had yet unleashed his evil master’s plan but that she was distracted by his presence, sensing unseen eyes were again upon her from the clouds. All the while, the Il Bora, who has been spying on Aria, is secretly falling for her. He is conflicted about his orders to bring harm to the sweet girl. This is their first verbal encounter…
Excerpt:
From the darkened cloud cover he waited for her. Beginning to understand her routine, he knew she would traipse to the Meleyan’s high orchard. The girl seemed to like it there. Especially in the evening before she turned in to her cottage to sleep. 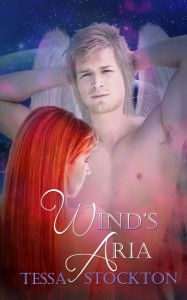 Watching with intent, the hour grew late and he got agitated with the notion that she might not come tonight. Feathers ruffled, he tried to will her to him, speak to her mind—but he did not have that gift like some of his brothers. About to soar higher, circling the premises, his breath caught when he spotted her. Yet instead of strolling, she ran.
As the girl scaled the last path and set of stairs leading upward to the plateau, he heard . . . crying. Without thinking, he descended to the ground, folding his lumbering wings, and stood still, hiding among the trees that were pregnant with ripened fruit and vast enough to hide his enormous frame.
She fell against a boulder and tucked her head against her slender arms, gasping, sobbing.
Like a mourning angel, the nightingale weeps . . .
“Who said that?”
The young girl shot her head up and then stood like lightning. He flinched, not realizing he’d spoken his thoughts.
“There. I can see you.”
He shifted back further into the shadows, escaping the moonlight. The risk of exposure seemed imminent and he hadn’t meant to take it this far. His master, full of hatred and anger, would probably destroy him.
“What’s that noise? It sounds like you’re dragging ten thousand leaves with you. You can’t be harvesting at this late hour?”
“I’m not harvesting,” he said.
“Then what are you doing besides encroaching on my space?”
“Do you own this orchard?” The question sounded harsher than he intended.
“Well . . . no.”
“Then I believe it is I who arrived before you. I was already standing here when I witnessed you run and throw yourself on that boulder there.” He pointed as if she didn’t know.
“Oh.” She hung her head, her voice slipping to a whisper. “That.”
For some reason an urge tempted him to take her in his arms. It petrified him and he fought the desire. With difficulty, he swallowed. “What has you so sad . . . Songstress?” He struggled to call her by title, for guilt racked his chest. He understood his master’s instructions for the day after tomorrow, though he didn’t share the sentiment. Not this time. Yet, he had no choice in the matter. Obey, he must. That was his duty.
He studied her, as close to the girl as he had ever been. She was young. Much younger than he’d expected for one with such an important duty of helping to edify and channel the abundance of, well, he didn’t really know who she sang to or about, but the task proved to increase the wishes of the city’s populous as a whole. It was nothing to scoff at, in his opinion anyway.
Her face glowed, pale like his, but small and . . . fragile. Petite might serve as a better description. Her long, orange hair fell to one side, as she stared at the dirt surrounding her feet. Her neck, delicate and slender, seemed somehow . . . inviting?
Waves of some unknown sensation coursed through him and he questioned it. Perplexed by this girl, he continued the scrutiny as she struggled to form words, her lips quivering. The silence enveloped them and he soon realized that she chose to refrain from speaking further, her chin still tucked.
“Why so sad?” He meant to ask the question with more confidence, but the words whispered out little more than a murmur.
“I’ve caused great harm to us this day. Haven’t you witnessed the sky?”
“Yes, and I find it particularly pleasing today.” He ascertained the thick covering of darkness and smiled, satisfied.
“How can you say that! There is no sun. Without it we can’t grow anything. We’ll be lost.” The girl sniffed. “I only hope that this one day without light is punishment enough for my mistake.”
He tilted his head, curious. “What mistake?”
“On the dais, I got . . . distracted. Lost my train of thought and had difficulty finishing the song. I’ve never made such an error before and I fear—” She squeezed the bridge of her slight nose. “Well, didn’t you hear? Weren’t you just at the plaza for the opening of the Sheaves Festival?”
“No.”
“No?” Her voice rose, incredulous. “Everybody attends—”
“I don’t.”
“Who are you?”
He pushed further back into the shadows as she strode closer. “Someone you need not know.”
“What’s that supposed to mean?”
When he didn’t answer, she sighed.
“What a strange, terrible day,” she mumbled. “Well, at least tell me your name . . .”
He stood, speechless, knowing he shouldn’t be there at all—conversing with a Meleyan—especially not their musical deliverer that he was set to doom the day after tomorrow.
A peculiar grumbling interrupted her insistence, to his relief.
“Sorry.” She patted her stomach. He could see, even in the blackened night, how her face turned a deeper shade of red than her hair. “I’ve forgotten to eat. I guess I’m hungrier than I realized.”
He plucked an apple from the tree he’d nearly become a part of and held it out to her.
The girl approached tentatively. She reached for the fruit but recoiled when her fingers brushed his.
“Is touching me so horrible?” he asked.
Her jaw dropped open and her delicate brow furrowed. She inclined her head. “It . . . hurt.”
“How?” he asked, for her fingers felt good to him, soothing. Warm. He wanted to try again.
END OF EXCERPT
Wind’s Aria on Amazon
Bio:
A former choreographer, dancer, and musician, Tessa Stockton now writes romance and intrigue novels in a variety of genres.
Follow links: If you want to learn more about Tessa, here are links to many of her pages.
www.TessaStockton.com
https://www.facebook.com/tessastockton
http://twitter.com/TessaStockton
http://www.linkedin.com/pub/tessa-stockton/29/553/222
http://www.goodreads.com/author/show/4639560.Tessa_Stockton
Thank you, Tessa, for sharing your work with us today!
000000
← Seducing Sigefroi on First Sight Saturday
Vain on First Sight Saturday →