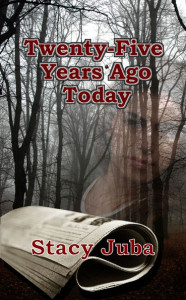 Here is a quick blurb to get you into the swing before you enjoy the first meeting excerpt.

For twenty-five years, Diana Ferguson’s killer has gotten away with murder. When rookie obit writer and newsroom editorial assistant Kris Langley investigates the cold case of the artistic young cocktail waitress who was obsessed with Greek and Roman mythology, not only does she fall in love with Diana’s sexy nephew, but she must also fight to stay off the obituary page herself. A unique blend of literary mystery, cozy mystery, and romantic suspense. Get in on the secret – join thousands of readers in discovering who killed Diana Ferguson.

A man in his late twenties stood at the counter, arms crossed over his black leather bomber jacket. Dark hair feathered to the nape of his neck in soft waves. His smooth molded cheekbones and the cleft in his chin had hardened to stone. Kris’s heart speeded up, partly from the anger rolling off him, partly from his rugged attractiveness.
“Hello, I’m Kris. Can I help you?”
“I’m Eric Soares. I want to talk to you.”
“Soares? Are you Cheryl’s son?”
“Yeah, and I have a problem with this newspaper.”
Out of the corner of her eye, Kris saw Bruce rummaging in a supply cabinet, listening. Front office personnel stole glances over their computer screens.
“Let’s discuss this in the conference room,” she said.
Eric gave her a cool nod. He followed her down the corridor and Kris struggled to recall her meeting with Cheryl and Irene. They’d parted on good terms. Hadn’t they?
She sat behind the long oval table used for weekly news staff meetings. Gold award plaques for editorial and advertising excellence hung on the walls and a white erasable board showed assignments for the upcoming Presidents’ Day automobile supplement. Eric chose the plush swivel chair opposite Kris.
Kris breathed in and out a couple of times. She wished he weren’t so damn good- looking. His sexiness unhinged her, brought fire to her cheeks. Maybe he wouldn’t notice, or would attribute it to nerves.
“You’ve convinced my grandmother that Diana’s killer will finally get what he deserves,” Eric said. “She talks about it all the time. I think you were irresponsible to stir up the past.”
“I never promised her success.”
“She’s raised her hopes pretty high.”
Kris clasped her moist hands on her lap, avoiding his smoldering green eyes. “I understand your concerns, but don’t you want your aunt’s murderer punished?”
“It’s impossible. Eventually, you’ll give up and move on to the next exclusive. Where does that leave my grandmother?”
“I realize this is a longshot, but it’s worth a try. If I don’t have any luck, I’ll help Irene through it. I care about her.”
“You care about breaking a big story.”
“Both are important. I’d like to prove it.”
“I’ve read the news clippings about my aunt,” Eric said. “Your paper portrayed her like a whore.”
“You can’t blame me for that. I was a toddler.” Kris’s jellied knees trembled under the table and she pressed her sneakers into the carpet.
“I don’t want my grandmother exploited.”
“I won’t hurt her.”
“If you don’t find Diana’s killer, then you already have.”
END OF EXCERPT
To buy Twenty-five Years ago Today, visit these online book vendors.
Amazon      Barnes and Noble       Kobo         Audible
If you want to visit more with Stacy Juba, head over to her website.
Thanks for visit on First Sight Saturday, Stacy!
000000
← Vain – third week – on First Sight Saturday
Angel’s Assassin on First Sight Saturday →