Every Saturday I feature a first meeting from the book of a guest author. This week Linda McLaughlin shares an excerpt from her sweet Regency romance Lady Elinor’s Escape. 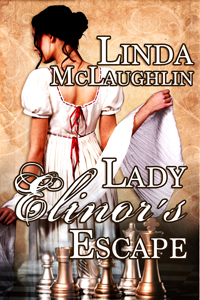 SETUP OF SCENE: Lady Elinor Ashworth always longed for adventure, but when she runs away from her abusive aunt, she finds more than she bargained for.