Each week on First Sight Saturday I welcome an author to share an excerpt of a first meeting. Today Ally Shields will share her urban fantasy/romantic paranormal Awakening the Fire (Guardian Witch Book One). 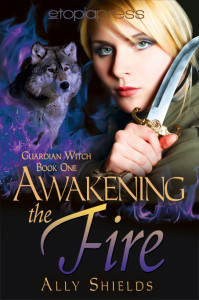 Here is Ally’s setup of her scene: Twenty-three year old Ari Calin is a fire witch and a Guardian, a supernatural cop. She has just used her witch fire to save a human teen couple from a werewolf attack in a wooded park late one evening.

One Response to Awakening the Fire on First Sight Saturday