Today we have an interesting excerpt from a historical romance novella by Ute Carbone called Sweet Lenora.  I say “interesting” because it is written in the first person point of view, and uses some antique word choices that make the reader really move back in time. Fun stuff!

SETUP OF THE SCENE: Lenora Brewer has stowed away on the Sweet Lenora. She’s been found out and, after stopping some of the crew from accosting her, Anton Bourdreaux has her taken to his cabin. This is the first time they speak to one another. 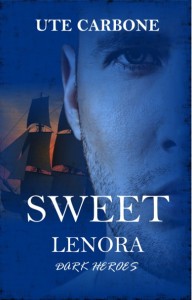 I was in the captain’s quarters, of that I had no doubt. Which meant that the dark haired man was none other than the infamous Captain Anton Boudreaux. Curious to find out more, I went to the log. Not much was writ on the page, merely records of what the ship carried and the weather when she had set sail. Frustrated by such a lack, I sat back in the chair then bolted out again as the cabin door flew open. The black haired man stood on the threshold, examining me with his coal dark eyes. His look suggested he would like nothing better than to tear me limb from limb, and I shrank back against the wall. He stepped inside and pulled the door shut behind him.
For all of Aunt Louise’s insistence that I was a wanton and wild woman who ran afoul of manners, his actions shocked me. I had never stood alone in a room with a member of the opposite sex, much less a room that was a bedroom, and much less a member as handsome and with a reputation such as the one who stood before me now.
His fiery countenance turned my knees to water. He walked to the desk and closed the ledger, then stared at me with a scowl for agood long minute that seemed to stretch to an hour. I wilted under his gaze. He was far taller than I, with broad shoulders, and I was frightened of him and desired him at the same time.
One suitor of mine had been daring enough to kiss me in the apple grove. I remembered the kiss as stirring, and though I protested it at the time, a warm feeling had overcome me. It was nothing compared to the feeling that inhabited me now. Heat stung at me and left me feeling pliable in body, my face flushed.
Yet what choice had I but to stand my ground? I straightened my spine and with all the bravado I could muster to my bones, I returned his unflinching stare.
It gave me the opportunity to examine him. He was, I could see, not much older than I. His hair was black as a raven’s wing and waved back from a high forehead. His face was bronzed, chiseled and handsome, with lines about the eyes from days spent in the sun. And those eyes! Dark as midnight were they, with a depth one could fall into.
My stare had an effect. Although the scowl did not leave his face, he blinked, sighed, and went to sit at a chair near his berth. “What am I to do with you?” he muttered under his breath.
“Allow me safe passage?”
“And why, pray tell, should I do such a thing? You are a stowaway. By rights, I ought feed you to the sharks.”
“By rights, perhaps. But you are too fine a gentleman to throw an unarmed girl overboard.”
The remark made him smile, though only briefly. “I am no gentleman. If I were, I would bid you to cover yourself.”
The men had ripped the laces of my gown. The bodice hung low, revealing the curve of my breast. Boudreaux stared at the space between them and I wondered that he did it to shame me. I pulled the torn fabric up to cover myself and felt the bloom of heat on my face. The captain handed me a blanket.       “You see, you are a gentleman after all,” I said.
“Being as your naiveté invites trouble, I have no choice in the matter.” He eyed the ledger I so recently had read. “I did not think ladies were given to spying.”
“I was hardly spying. Besides, what makes you think I am a lady?” I had grown more comfortable in his presence. His giving me a blanket proved to me that he meant me no harm. And his eyes had softened somewhat.
“You wear silk. I presume you can read. Someone is no doubt looking for you, so I cannot throw you to the crew or the fish.”
“You see, you are honorable after all.”
“Nay. I have no honor.”
“Yet you protect me from the crew and the fish.”
“’Tis my duty to keep order on board my ship. You cause chaos.” He circled close to me, close enough that I could feel the warmth of his skin. I thought he might kiss me, a foolish notion I invited to keep me company despite my knowing it for the fantasy it was. “So who is it that looks for you?”
“Why would anyone look for me?”
“You have run away. It suggests you are wanted. And that you would rather not be found. You may be naïve, but I doubt you are witless. You risked your very life stowing aboard my ship.”
“I had little choice.”
“And I have little choice but to see you given back to whomever you’ve run from. Since we are already well under way, I shall have to keep you until we reach San Francisco.”
“You will offer me your protection?”
“Long as you warrant it. You’ll stay in the cabin. Unless you would like your virtue compromised by my crew. They will be all too happy to serve in such a capacity.” With this, he bowed and left the cabin. My pulse raced at the thought of his return.
END OF EXCERPT
Oh, the memories of cutting my reading teeth on Kathleen Woodiwiss’s seafaring tale The Flame and the Flower. I’m sure you are eager to stow away with your own copy of Sweet Lenora, so here are the places you can find it!
Sweet Lenora Buy Links:
Amazon
Champagne Books
BookStrand
ARe
And if you want to learn more about author Ute Carbone, visit with here here:
Web page:  http://www.utecarbone.com/
Blog: http://ute-carbone.blogspot.com/
Facebook: https://www.facebook.com/pages/Ute-Carbone/234417796596443
Twitter: https://twitter.com/Wildwords2
Goodreads: http://www.goodreads.com/author/show/5114798.Ute_Carbone
Amazon: http://www.amazon.com/Ute-Carbone/e/B005G7U8RM/ref=ntt_athr_dp_pel_pop_1

Thanks for stopping by today. I share an excerpt from a guest every Saturday so sail back this direction next week!
000000
← Little Witch – A First Meeting
Cover Reveal for Little Witch →