Each week I welcome an author to share a first meeting excerpt. This week Michelle Grey has brought her romantic mystery, Unspoken Bonds. 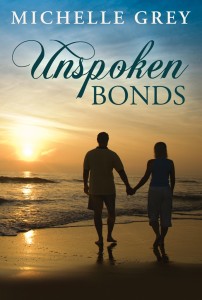 SETUP OF SCENE: When Garrett meets Rachel, he’s just found out he must assume responsibility for his niece, which doesn’t fit into his plans at all.


Garrett had reviewed the results of the DNA testing he’d requested. The girl he was about to meet was undeniably his sister’s daughter. He stepped through the restaurant doorway as the hostess appeared. Despite his qualms about meeting Lily, he was curious. His eyes adjusted to the muted lighting as he scanned the room. They landed on the small girl and the truth tackled him head-on. The DNA test had been an unnecessary formality. Lily was a spitting image of Gweneth when she was little.
The air left his lungs as questions he had no way to answer filled his head. Questions that, for now, didn’t matter because Lily was alive, and she was here. And his life had been irrevocably altered.
Waving off the hostess, he approached the table on wooden legs. Lily’s eyes widened as she tugged on the sleeve of the woman fussing with the bow on Lily’s dress. The woman whipped around, dark hair fanning out around her face. For the second time in as many minutes, he was blindsided. The most astonishing sky-blue eyes he’d ever seen were framed by a face that could only be described as stunning.
She stood, the top of her head almost reaching his chin, and extended her hand. “Mr. Staker?” At his nod, she continued. “Good afternoon. I’m Rachel Mansfield. I’ve been taking care of your niece. Please allow me to introduce you to her.”
Her voice was full-throttle sexy, but her words were rehearsed and the look in her guarded expression spoke volumes, a subtle challenge that left no doubt he was under her microscope. That did a lot to curb her sex appeal. He wasn’t here to gain anyone’s approval. He took her hand. “Please, call me Garrett.”
“Nice to meet you, Garrett.” Rachel nudged Lily twice before she finally held out her hand.
Garrett leaned down and shook it briefly. “Hello, Lily.” He shifted, embarrassed. “I don’t know why I said that out loud.”
A small smile crossed Rachel’s lips as she returned to her seat. “It’s perfectly fine. I do it all the time.”
Lily scooted her chair a little closer to Rachel’s, her wary eyes never leaving Garrett. He tried not to make her uncomfortable, but he couldn’t resist scanning her features.
“She looks just like her mother.” Garrett shook his head at his inane statement. This wasn’t one of those family affairs where platitudes were kicked around under the guise of real conversation.
Rachel shifted toward Lily, her hands relating her words. “He said you’re beautiful and you look just like your mommy.” After a moment, Rachel nudged her. “What do you say?”
Lily cast her eyes downward before making a small movement with her hand from her lips and mumbled the words.
Rachel put her arm around the girl’s shoulder and met Garrett’s gaze. “That was a very weak ‘thank you’. We’ve been working on our manners.”
Garrett looked from Lily to Rachel. “She said words. Did you hear that? I thought she was deaf?”
Rachel nodded. “That’s a puzzle I’ve been trying to figure out. Based on the research I’ve done, it would seem her hearing loss is relatively recent. But, she’s very bright, and surprisingly social once she gets to know you. She had next to no signing skills, but that’s improved greatly over the past week and a half.”
Was there a hint of accusation in her voice? Garrett’s shoulders tightened. “Ms. Mansfield, I was out of the country on business then had to deal with the formalities of Lily’s guardianship. I couldn’t have taken her off your hands any sooner.”
“Call me Rachel. Please.” Her tone had turned frosty. “I wasn’t implying that you took too long. I only meant to say that Lily’s made a lot of progress. And I certainly don’t consider her a problem to be taken off my hands.” Removing her napkin from the table, Rachel motioned for Lily to do the same then released a deep breath. “I’m sure this whole situation’s been quite a shock for you.”
“You have no idea.”
Rachel stiffened, her sharp eyes narrowing.
Does she expect me to be less than honest? She might consider her time with Lily to be fun and games, but her life was getting ready to return to normal.
“Good afternoon. What can I start you off with today?”
Garrett was glad for the waiter’s interruption. He regularly negotiated multi-million dollar deals, yet he was on the defensive in no time with this woman. After they ordered, Garrett consulted his phone to check his email.
Rachel opened a packet of crayons for Lily and drew her attention to the coloring page. “She likes to color.” She crossed her arms, apparently waiting for him to finish.
He pocketed the phone and caught her frown. He probably could’ve found a better time to reply to the message, but it was an important one. He decided to play along, hoping he sounded sincere. “Is that so? What else does she enjoy doing?”
Rachel held his gaze, her words strained. “She likes puzzles. And memory games. She’s actually pretty amazing if you take the time to get to know her.”
Her not-so-subtle challenge was reinforced by the arm she slid around Lily’s shoulders. The protective gesture wasn’t a conscious move, but why the hell was he the enemy? He’d come for her.    He was going to do right by her.
Lunch arrived and Garrett watched the communication between Rachel and Lily, feeling like an interloper. If things didn’t change, this was going to be a long lunch.
END OF EXCERPT
You can find Unspoken Bonds at http://www.amazon.com/dp/B00FBY3BOW
Michelle can be found at the following places:
Website  www.threewritersofromance.com
Facebook  https://www.facebook.com/michellegreyauthor
Twitter  https://twitter.com/MichelleGrey13
Michelle and I welcome any comments and questions, and hope you will come back every Saturday for a fresh new first meeting excerpt.
000000
← Sports Banquets: No Good Deed Goes Unpunished
Life Changes →