Each week a guest shares a first meeting excerpt on First Sight Saturday. Today I welcome Heather Boyd, a fellow Love Historicals author, with her new release, An Accidental Affair. Take it away, Heather!
Hi Jill and readers! Thanks so much for inviting me to visit today to share an excerpt from my latest regency romance, An Accidental Affair.
Jill asks us to share a fun fact about ourselves and I must admit that seemed easy in the beginning. I’m a woman of many vices (though nothing illegal). I’ll go out of my way for good coffee and cheesecake, I don’t skimp on entertainment (movies, TV or books) and I’m probably a great source of humor for my children. (I don’t mind them laughing as long as its with me.) The one fact about me, though I’m not sure if it’s fun or just odd, is that I have done a 180 turn and followed a complete stranger down the street on foot. He was smoking a pipe and the scent reminded me of my grandfather and his very bad habit. LOL
I’m so happy to share an excerpt from my latest novel, An Accidental Affair. This scene is from the heroine’s point of view and we get a glimpse into how she moves through the ton. Please enjoy… 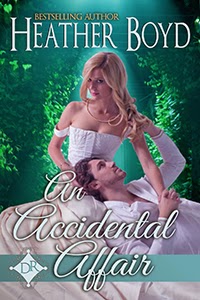 EXCERPT:
Arabella studied the men around her as she moved through the crowd in search of Cecily and contented herself yet again with inspecting the lords present. Arabella was tall herself, so her eye was drawn to the men of equal or greater height more often than not.
When it came to choosing a lover, Arabella also had a short list of requirements: Cleanliness was essential, though not the suggestion of it that came from heavy-handed application of perfumes. Unmarried and unattached by affection for the season was her main requirement, however. She could not contemplate usurping another woman’s place. What she wanted was someone to be hers alone when they started, someone who did not mind that one short affair might be enough but would not be averse to a repeat meeting if their tryst proved enjoyable. Arabella blushed as she gained the entrance hall and looked around. She didn’t have the first idea under what circumstances that might be possible. She only had the guidance of a distant friend’s confidences to rely upon that the sexual act was both pleasant and worth repeating.
As she traveled through the card room and came up empty-handed, she marveled that there were so many widows in London for the season, many of whom already seemed in the company of unattached men. She envied them their confidence. Arabella couldn’t look at a certain well-known rake with whom she was acquainted without a blush heating her cheeks. But from all she’d heard, Lord Rothwell had a similar effect on every woman.
She fanned her face quickly, then snapped the fan shut. Now was not the time to dwell on her own interests. She had a niece to find before society noticed her absence and scandal caught them. She was almost satisfied she would survive one more night without incident until she ventured to the retiring room. Cecily was not there either, and Arabella retraced her steps, hoping they had passed each other unseen.
As she regained the ballroom and looked around for her niece, an elegant, silver-haired matron caught her eye. Lady Penelope Ford, society’s most intimidating stickler when it came to propriety, met her gaze steadily as she drew closer. Arabella straightened her spine instantly, even while concentrating on appearing as unperturbed as possible.
“Good evening, Lady Farnsworth,” Lady Penelope Ford murmured as she drew near.
“Good evening, Lady Penelope. A pleasure to see you again.”
After a long, uncomfortable moment, Lady Penelope nodded regally and returned to her own party, a half dozen members of the Ford family by their looks. Arabella continued on with as much calm grace as she could manage, but her heart was pounding. Quite frankly, Lady Penelope’s scrutiny terrified her. It always had. One curt word from that lady would ruin Cecily’s chances of making a good match and put the family out of favor with those who mattered.
She glanced behind her self-consciously and shuddered. Every time she crossed paths with the Fords, Arabella developed an uneasy feeling in the pit of her stomach. Society called them the Fighting Fords. Navy men, every last one, and with tempers little suited to conforming to society’s expectations. No one doubted their loyalty to king and country, but they were said to fight as much amongst themselves as against the French.
A prickle of awareness caressed her neck. She turned her head a fraction, startled to meet the Earl of Rothwell’s intense stare. Lady Penelope Ford’s wayward nephew was known to her through a neighbor and friend in Wiltshire, so she smiled kindly.
His attention did not waver when dancers formed lines between them, and he did not smile at her as he had done with Lady Harrison. Heat swept up her neck and cheeks, making her wish her discomfort wouldn’t be obvious should she reach for her fan and beat it furiously before her face.
Arabella returned her gaze to the path ahead, determined not to appear as virginal as she felt at that moment. Rothwell’s scrutiny, even from across a crowded ballroom, was worse than his aunt’s. He had the most remarkable effect on her nerves, sending them in all directions at once. Yet when she peeked in his direction again, Rothwell had vanished, leaving her to sadly conclude that he’d certainly had no trouble forgetting her as soon as his gaze moved on.
I hope you enjoyed the excerpt and if you’re interested you can visit my
website http://bit.ly/1a5vTPQ ]
or read the first three chapters on Wattpad http://bit.ly/1e90A6E
AUTHOR BIO:
Bestselling historical author Heather Boyd believes every character she creates deserves their own happily-ever-after, no matter how much trouble she puts them through. With that goal in mind, she weaves sizzling English set love stories that push the boundaries of regency era propriety to keep readers enthralled until the wee hours of the morning. Brimming with new ideas, she frequently wishes she could type as fast as she conjures new storylines. While writing full time north of Sydney, Australia, Heather collects dust bunnies in all corners of the house and does her best to wrangle her testosterone-fuelled family into submission. You can catch up with her at www.heather-boyd.com,  Facebook http://bit.ly/heatherboyd  and Twitter http://bit.ly/1cjN6X5
BUY LINKS:
Heather on Amazon: http://amzn.to/1gmKOn1
Heather on Apple iBooks: http://bit.ly/1cjMtwJ
Heather on B&N: http://bit.ly/1gJMEOI
Heather on Google Play: http://bit.ly/1i2ZTzr
Heather on Kobo: http://bit.ly/1gOQDfn
Heather on Smashwords: http://bit.ly/NfUVBn
Thanks so much for visiting, Heather. I hope everyone leaves comments and questions, and I especially hope for readers to return each Saturday for a fresh new excerpt from a visiting author.
000000
← Chapter 8 – Becoming Mrs. Thornton #sequel #northandsouth
Chapter 9 – Becoming Mrs. Thornton #northandsouth #sequel #wedding →