Chantilly White shares a twofer today with her New Adult contemporary romance set, Christmas Wishes, Valentine’s Kisses: Unwrapped and Cupid’s Mistake. A fun fact about Chantilly: she’s a huge Harry Potter fan and is headmistress of a virtual Hogwarts full of other HP fanatics. So, do they call you Dumbledore?

This scene is from Cupid’s Mistake, which is book two in the series bundle. Allison and Ben are members of a dating service, Cupid’s Cavalry, and are on their first date, although they’ve unknowingly seen each other once before, at Allison’s recent New Year’s Eve party. 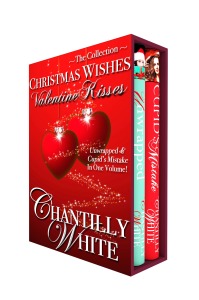 The woman came in like a whirlwind, rustling the thick green leaves of multiple potted and hanging plants near the front door of the restaurant. Chattering to the maître d’ and unwinding a long, bright scarf from around her neck with one hand, she texted speedily with the other, hardly looking at the screen.

That hair. Wild copper curls cascaded almost to her waist, shot through with strands of pure gold. He knew her instantly, even before she turned around.

Tall, slim, impossibly sexy in painted-on black jeans and high-heeled boots, she hustled toward his table, her head now bent over the cell phone in her hand, a slight frown marring her perfect complexion. She caught the edge of her full bottom lip between brilliantly white teeth, and he cursed the unwelcome bump in his pulse.

It was Sally’s neighbor from New Year’s Eve. The Princess.

Allison navigated the tables without looking up from her phone, sacrificing her usual flair for making an entrance in the interest of closing out her business for the day. She hated running behind.

Depositing her coat, scarf, and handbag on the chair next to the one she dropped herself into, and finishing up a strongly-worded text to the baker bitch, Allison tossed the phone into her bag, turned emphatically off. She didn’t want even a silent vibration interrupting what promised to be a pleasant lunch with a handsome man.

“Whew!” she said, giving her hair a quick fluff. “There.”

Turning on her most brilliant smile, she finally looked up. And found herself skewered by a pair of the most intensely green eyes she’d ever seen. Her breath stopped mid-inhale. The only thought in her head was, “Well, damn it, I’m not ready for you,” even as her heart sighed, “There you are,” as though the man sitting across from her was the critical missing piece in the puzzle of her life.

Which was just ridiculous. There was nothing missing from her life. Nothing. But. . .

The man had half-risen out of his seat, as though he’d intended to pull her chair out for her but hadn’t gotten the chance. Wow, he was huge. Had she read that in his profile? She dated a lot of tall men—she preferred them, since she was so tall herself—and it was hard to gauge his full height behind the table, but he might be one of the tallest she’d been out with in a while. Every inch of him radiated a dangerous sort of sophistication. He wasn’t Wall Street by any stretch, but he could probably chew up a suit or three for breakfast, then play a round of golf with the fourth.

A little snap of sexual heat sizzled across her pulse points. She resisted licking her lips.

“Miss. . . Kelly?” the man said, and she shivered. His voice rolled through her mind, rough and deep. The rumble slid inside her bloodstream like molten lava, igniting tiny flames atop every nerve ending it touched.

Licking her suddenly dry lips, Allison nodded, her field of vision widening slowly to take in the rest of him. And oh, what a vision. A weathered face of granite-hewn features carved by a master sculptor, a strong neck, and militarily-erect posture. Deep-set, boldly green eyes, and even deeper grooves alongside his wide, unsmiling mouth. Surely those grooves meant dimples, if he’d only smile. A hard, square chin, those lips. . . And a body designed for the spectacle of the Colosseum.

“A-Allison, please,” she stammered, willing her voice to work. “And you’re Benjamin.”

He dipped his head in acknowledgement. “Ben,” he said, the firm line of his mouth kicking up at the corner in a slight smile. “Ben Turner.”

Overheated, she grabbed the glass of water at her place setting and sipped when she wanted to gulp it straight down and grab his, as well.

The man was enormous, all broad shoulders and bulging biceps outlined beneath his close-fitting black sweater. His chiseled features and deeply tanned skin spoke of many hours spent outdoors. Was he in construction? His name floated alone in the emptied space between her ears, the only concrete bit of information she could grasp.

No, military! He was ex-military. And he liked to swim. That explained the shoulders.

Sharp cheekbones jutted high and smooth, paler than the upper half of his face, though they looked slightly sunburned. His hair was gorgeous. Silky and full, perfectly cut, it waved back from his face like a glossy pelt of many colors—chocolate, russet, bronze, gold, deep red. An urge to run her fingers through it swept across her skin, making her fingers tingle.

What the hell was wrong with her? She was the seductress, the man-magnet, the woman who snagged her selections from a never-ending parade of available men. They flocked to her. She graced them with her presence—or not—on her whim. Yet here she was, stammering like a schoolgirl, dangerously close to a blush, her wits scattered about her like a deck of cards flung into the air.

Testing herself, Allison held her hand across the table to shake, watching as his strong fingers engulfed hers in his massive paw. Hard calluses brushed the softness of her palm, so pale against his sun-darkened skin. The tingles turned to tremors, and she gasped. She couldn’t help it. Sensations swamped her. Her scalp felt ablaze, and trails of heat shot straight to her toes.

“It’s a pleasure,” he said, but that indefinable something still lurked in his eyes, making her doubt the sincerity of his words.

Uh oh. He thinks he doesn’t like her and she doesn’t remember meeting him? Or does she have an evil twin? You know you want to find out more, and Chantilly has this book available almost any place you could hope for, so follow your favorite link.

Chantilly and I welcome your comments and questions. Come back each Saturday for a new first meeting post.