Welcome to Mageela Troche who shares a first meeting excerpt from her historical romance, Claiming the Highlander. Mageela’s fun fact is that she can pick items up with her toes. I wish she’d sent a picture of her feet, but she didn’t.  😉

Setup of the scene: Caelen and Brenna were married as children. After many years of him being fostered with Clan MacLean, he has returned home as his father lies dying. To appease Brenna’s father, Laird Grant, she has been sent for and is now on MacKenzie lands where she awaits the arrival of her husband. 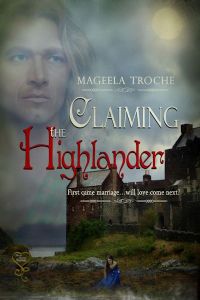 Brenna shut her chamber door. The smoke from the wall torches filled the turret stairs and stung her eyes. She waved away the cloud as she descended from the top floor. That chamber had been her own since she was seven, when the laird and lairdess first fostered her. Brenna loved the space, since Caelen once rested his head there. Being in the chamber was the closest she came to sharing a bed with her husband.

Learning her role as the future Lairdess of Clan MacKenzie, her life consisted of watching, waiting and being a help or a hindrance. Lately, she had been a help. Only that mattered to Brenna, especially after she intruded upon the Lairdess weeping in the garden. That was her place of refuge. Brenna had moved forward and then stepped back, leaving her to her sadness. What did one say when death hovered near? The truth was, Brenna wished she could make the laird survive. Brenna took pride in her healing skills and knowledge of herbs, but in this instance, those skills were meaningless, so she strived to lessen the Lairdess’ burden. This day, the duties had been split between her and Rowen.

Rowen would see to the household, the meals, the cleaning of it, and other duties. Whereas Brenna was to assist the clan and handle any issues the clanfolk faced this day. So being a crumpled mess of shattered bones at the bottom of the stairs was not part of her plan. As a child, she had sped up and down the stairs without a care that she might fall. Yet, when she returned here a sennight ago, she had fallen up the stairs and landed on her face, three steps up from the one she just tripped on.

She reached the last step and halted. The smoke must have conjured images. Caelen stood at the end of the corridor. She blinked, believing the vision would vanish into nothingness. The arched doorway framed his muscular form, which was draped in MacLean plaid. His head hung down. His long locks draped around his face and blocked him from her view. Light flickered over his Viking blond hair. She blinked a few times, waiting for him to notice her standing here. She must have moved because his head flew up. When she had lived on Grant lands, Brenna caught—stalked—a young couple sneaking to the back of the kitchens. She watched the maid nibble on the kitchen’s boy ear.

Brenna should have been ashamed. Should have. “Caelen.”

He faced her. A smile spread across her face and her cheeks hurt from it. She wanted to throw herself in his arms. Instead, she buried the urge. She even squeezed out a couple of tears.

Her feet skipped over the floor as she raced to him. She threw her arms around him and squeezed him tightly. She lacked the strength to hold him as she wished. Caelen was all hard muscle. He smelled of the outdoors—greenery, and of the fresh wind that whirled about him and caught in the weave of his plaid, along with a manly scent that was his own. She stroked her cheek against his plaid. The scratchy wool caused her skin to tingle.

She ran her hands over his thick arms. He had come for her. She linked her fingers with his. She leaned her head to the side to look at the shut chamber door. Last night had been a difficult one. The healers and servants had been going in and out through the night. Their muffled voices reached her chamber along with the groans of pains coming from the laird—aye, the laird would be leaving this earth soon. Her smile dimmed along with the heady delight within her. “You have finally returned.”

Caelen arched a brow, revealing his blue eyes. She loved his pure, blue hue that shined bright with shards of white, unlike her plain, brown ones. He pulled his hand away. She tucked her empty hand within the pleats of her dress. This was not the reunion she had imagined since she learned he was returning home. Caelen was supposed to grab her in his arms and swing her about. After holding her close for a drawn-out moment, he was supposed to slide her down his body, and then kiss her. After he ravished her mouth, he was to stare deep into her eyes. He might have even whispered tenders words. Instead, he stood there, his arms at his side. The man didn’t even reach out to her.

“You look well, Brenna.” His gaze slid over her, lingering at her hips. She felt the heat of his inspection. He no longer looked at her as a little lass.

“You haven’t cleaned up from your journey.” His plaid was wrinkled and the pleats were flat. She brushed at a smear of dirt marring his leine. It was just a reason to touch him.

“Seeing my father was more important.” He peeked over his shoulder. “I should have been here earlier.”

She licked her lips. “Has the laird fallen asleep?”

“Nay, he…he started coughing.” He shook his head. The ends of his blond hair fanned out. The pale tips caught the amber light of the torches. His strong brow was more pronounced from the lowering of his brows.

“Last night was hard for him, but your arrival shall make him feel better. When I sit with him, he always speaks of you.”

When he hung his head, she wished she could take back her words.

“You sit with him often?” He pushed back his hair.

“Aye. Sometimes, we discuss you, and other times he tells me stories or curses the healers. It depends upon how he feels.”

His broad shoulders that seemed to be able to bear all of Scotland and England upon them, straightened. “I am here so I can see to the running of everything. You shall assist me.”

She rose to the tips of her toes. “Of course. I am your wife.”

Seems like Brenna may have a job of getting Caelen to warm up to her. I’ve always enjoyed stories that involve long-separated spouses though I’m don’t think I’ve ever read one in which they’d married as children.

I’m sure you want to read more, just like I do. You can find Claiming the Highlander at the following retailers.

If you want to know more about Mageela Troche, she can be found online at a variety of places.

We welcome your comments or questions. Thank you for visiting today, Mageela!