Today I welcome fellow Love Historicals author Anna Markland with her first meeting excerpt, and this isn’t one that would normally set up the expectation of love. Something people may not be aware of about Anna is that since the summer of 2011, she has written and published 21 books. Astonishing! The Rover Betrayed is her Viking/Medieval romance released on Feb. 23. It’s the third book in the Viking Roots series.

SET UP OF THE SCENE

Magnus is a second generation Norman, a descendant of the first Vikings to settle in the Seine valley. Recently widowed, he is obliged to leave his grieving daughters to fight against Flemish incursions into Norman lands. In hotly disputed territory he comes across a wedding ceremony taking place outside a church. The bride, sister of the Flemish leader, swoons upon catching sight of the enemy troops. He jumps from his horse to save her from the mud. 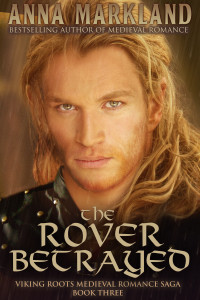 Magnus leapt from his horse and strode to the door of the abbey where an older woman—a servant he’d guess—struggled valiantly to keep her mistress from falling into the muck. He scooped up the mud-splattered maiden who’d swooned on first catching sight of them. His thoughts went back to the last time he’d held a woman in his arms, but he shook away the bitter memory. This one was still very much alive, as evidenced by the rapid rise and fall of her breasts.

The appealing mounds of female flesh were big enough to fill his hand. A tingling tugged at the base of his spine, but then shame swamped him. He’d only recently buried his wife.

Judging by the presence of the priest and a young man in black who’d fled at their arrival, he’d wager the wedding had been underway. But where were the well-wishers?

He stared at the woman in his arms. Despite her disheveled appearance and pallor, heightened by the bright red of her nose, she was stunningly beautiful. Her tangled hair was the color of chestnuts. He willed her eyes to open, but she remained oblivious. A peculiar hope rose in his heart that he’d arrived in time to interrupt the wedding, but he quickly dismissed it. What did he care if Arnulf’s sister had wed a coward who’d run rather than defend his bride?

The priest scowled, though his anger seemed to be directed more at the woman in Magnus’s arms than at him. Something strange was going on.

“I am Magnus Kriger of Montdebryk,” he said to the cleric. “I am a Christian. You and your fellow priests have nothing to fear. We are Normans, part of an army sent to recapture Montreuil.”

The priest eyed him with scorn. “You claim to be Christian, yet you wear a pagan symbol around your neck.”

Magnus didn’t look down, but surmised his Thor’s hammer must have worked its way free from under his gambeson. He decided to ignore the priest’s comment.

The cleric shrugged. “What do you intend with the woman?”

He looked down at Arnulf’s sister. She felt right cradled against his chest, though she’d moaned softly a few times. He feared when she awoke and espied his father’s Viking helmet she’d think him a barbarian. Why it mattered he wasn’t sure.

“Take her for a moment,” he said, intending to remove his headgear, but the priest backed away, his palms held out as if warding off evil spirits. What ailed the man?

“I’ll take her,” his cousin, Bendik offered, coming to his side.

An surge of jealousy addled Magnus’s wits and he clutched the stricken woman more tightly.

Bendik chuckled. “I won’t harm her,” he said.

Magnus laughed at his foolishness and handed her over. He removed his helmet, thrust it into the priest’s hands, then retrieved his prize. It was lunacy and Bendik’s frown indicated he agreed. The town and abbey had to be secured, but the only thought on his mind was the desire to comfort a beautiful woman.

He thought of Katarina. “You and I would willingly kill anyone who might treat our sisters in such an abominable way,” he said to Bendik. “Does the Comte of Flandres care nothing for his sibling?”

Judith was warm for the first time in days. A man with a deep, soothing voice was carrying her. It rumbled from his chest—a solid chest, though it felt good to rest her weary head against it. She wanted to murmur her gratitude to the brave hero who had rescued her from a fate worse than death, but her throat was too dry. He must be one of Arnulf’s men.

She slowly opened one eye and looked up. She was in the arms of a fair-haired giant whose broad shoulders blotted out everything else around her. He was still speaking, but her head was stuffed with the wool of a newly shorn sheep and a drum pounded in her ears. She cleared her throat, but swallowing was difficult.

Judith opened the other eye and strained to see her maid. Where was the confounded woman? If there was no need for fear, that must mean—

It wasn’t Theodoric carrying her. How unseemly to be in the arms of another man. The memory crashed in. Surely Arnulf hadn’t wed her to a freak of nature. “Husband,” she shrieked.

“He has fled,” the deep voice said with a strange accent. He must be a foreigner.

Riders led by a massive barbarian.

Her heart raced. She looked up again at the stubbled chin of her hero. Her eyes fell on a silver pendant nestled in the folds of his gambeson. Dread seized her. It was a pagan symbol; the hammer of one of the Norse gods. Her savior was a Viking.

It didn’t make sense. Vikings didn’t save women. They carried them off, raped then slaughtered them. She flailed her arms and legs, desperate to escape. She had to warn Beatris. “Vikings!” she screamed.

You can find The Rover Betrayed at the following sites.

You can find out more about Anna Markland at

Thanks, Anna, for visiting with me today!

Every week, Book Boyfriends Cafe suggests a topic for a blog hop, and this week it is Hot Kisses. Not all kisses are hot. A kiss can be gentle, soothing, unwelcome, or even gross. This one is the first scorcher for Boone and Violet, main characters in my New Adult contemporary romance, Eruption: Yellowblown™ Book One. They’re getting… END_OF_DOCUMENT_TOKEN_TO_BE_REPLACED

Monday was my dad’s birthday. I’ve been blessed with wonderful parents and a supportive family, but while those kinds of relationships make real life worth living, they get kind of boring in books or movies. Tension and conflict are the fuels that drive good stories, after all, and who knows how to push buttons better… END_OF_DOCUMENT_TOKEN_TO_BE_REPLACED

The beginnings of books are hard. Modern writers can’t often get away with pages of description, of guiding us into the setting and mood of the character. This is the favorite of my beginnings, featuring the hero of Redeemed, book two in my Evolution Series, who was the villain in book one and not a likable… END_OF_DOCUMENT_TOKEN_TO_BE_REPLACED

Thanks for visiting my stop on the Love Historical’s Valentine’s blog hop. Read my short excerpt to find the name of my hero in this scene where the heroine is fervently apologizing for a series of wrongs. It isn’t romantic in the sense of candles and flowers, but I chose this scene because it is… END_OF_DOCUMENT_TOKEN_TO_BE_REPLACED

The theme for this week’s Hot For Fridays is a scene with sexual tension. Mine is from Eruption: Yellowblown Book One, from my New Adult contemporary romance series. Aquaintances Boone and Violet just met by accident on a bike ride, and after a tough climb, are heading back to their dorm. She’s been crushing on him for awhile,… END_OF_DOCUMENT_TOKEN_TO_BE_REPLACED

Not everyone gets to have a romantic Valentine’s Day, and Violet Perch, the main character in Eruption, has had a series of bad ones. Last year, her high school boyfriend proposed to her in front of the entire school at the Valentine’s Day dance. (She said no.) Unfortunately, in this excerpt, we see her the next… END_OF_DOCUMENT_TOKEN_TO_BE_REPLACED

Here’s the moody cover for Endless as the Rain, book one in the Taken series by M.S. Kaye. BLURB When Adriane Graham discovers a city councilman is part of an embezzlement ring, she doesn’t realize her life is in danger until Alec Kadan, the son of a mobster, kidnaps her—not to kill but to protect her. But… END_OF_DOCUMENT_TOKEN_TO_BE_REPLACED

This excerpt is from a novella, Love Like A River, I’ve included in the collection Love Historicals Presents Lost In A Kiss: Eight Sweet and Sensual Novellas. My story is definitely on the sensual side. Gratia is alone in a garden by the Danube, at night, when this happens. EXCERPT She met the stone wall,… END_OF_DOCUMENT_TOKEN_TO_BE_REPLACED