On First Sight Saturday, I welcome guest authors to share a first meeting scene. Today Christina Tetreault visits with her just-released contemporary romance, Hometown Love. Her interesting fact is that she is mother to a set of identical twins. More power to you, girl. I have two children separated by 2.5 years and I cannot imagine surviving infancy and toddlerhood with two at the same stage.

SETUP OF OUR SCENE:

Jessica Quinn has gone out for her morning run. She passes Mack Ellsbury’s recently purchased house while he’s in the process of moving in some belongings. 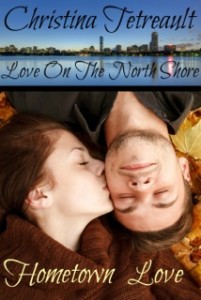 Trying not to think about the ache or what to do about Sharon, Jessie pushed on. Maybe she’d started running again too soon. Tomorrow, she’d head over to the gym for a swim before opening the store.

“Hey, Jessie,” a familiar voice called out as she approached the Kerry house. “How’s it going?”

Jessie stopped, grateful for the distraction as Sean O’Brien came down the front steps on his way back to the moving truck. “Hi, Sean. I was going to call you this afternoon. The bathroom vanity you ordered came in yesterday.”

Sean stopped in front of her. “Excellent. If we finish up here early enough, I’ll pick it up. Otherwise I’ll get it tomorrow.” Sean uncapped the water he’d grabbed on his way over and took a long swallow. “I want the downstairs bathroom finished before Mia comes back for Ma’s wedding.”

“She won’t make it back until then?” She’d become friends with Sean’s girlfriend that summer when Mia had stayed at The Victorian Rose. Earlier that month Mia had returned to California to finish the movie she was starring in.

Sean shook his head. “Doubt it, but I’m flying out to California next weekend.”

“Need a break already, O’Brien?” Mack emerged from the house, a backwards baseball cap covering his dark hair. “I guess that’s what happens when you get old.”

For a moment, Jessie spiraled back fourteen years and her tongue went from being a useful organ to a giant bowtie just like it had every time Mack had tutored her in geometry during study hall. A senior, and one of the most popular guys in school, Mack was the number one crush of most of the girls in her freshman class—including her. Not that he ever noticed any of them. Why would he when every cheerleader in North Salem and Danvers were constantly throwing themselves at him?

“Hi, Mack. Congratulations on the new house,” Jessie said once the knot in her tongue loosened.

Mack’s forehead creased and his eyes searched her face. “Jessie?”

Jessie let Mack’s surprise go over her head. After all, he hadn’t seen her in a while.

Sure, he visited his family frequently with his daughter, but he didn’t make a habit of stopping in at the hardware store. In fact, before today, the last time they’d seen each other had been six months ago when he’d come in for the security videos. Back then, she’d still had long hair and glasses. Not to mention, she’d been wearing her favorite oversized cranberry sweater and a long skirt, a fact she shouldn’t remember but did because, well, this was Mack so he wouldn’t have noticed the weight she lost.

“It’s nice to see you. Your parents must be happy you’re moving back.”

“Yeah. Grace, too. She already has plans to spend every weekend at my parents’ house. They haven’t agreed yet, but she’s well on her way to convincing them.”

“She does adore your mom,” Jessica answered, thinking of all the times she’d seen Mrs. Ellsbury with her granddaughter.

“This is North Salem remember? Your mom brings Grace to my grandmother’s every Sunday for quilting club if she has her. And your dad comes in the store with her.”

Another look of surprise passed over Mack’s features. “I didn’t know that, but it makes sense.”

“She even started her own quilt. Your niece did, too. Your mom brings her over on Sundays sometimes, too.”

Jessie waved at another of Mack’s friends as he came down the front steps. “Hi, Tony.”

“Hey, Jessie.” Tony Bates smiled as he walked toward them. “Unless you  ladies want to finish alone, get your asses in gear. I’ve got things to do this afternoon.”

“I gotta go anyway.” Jessica took a step backward. “Will I see any of you at the block party tonight?” Once a month, starting in late spring, their community threw a block party on the Town Common, shutting the whole area down to traffic.

“Not me. Too much work at the house, but have fun,” Sean answered. “I’ll see you later.” With that, he went back to the moving truck.

Jessie rolled her eyes. She never took anything Tony said seriously, especially not lately. Ever since she’d lost the weight and ditched the glasses, he’d been saying things like that, but she knew better than to get into any kind of relationship with Tony. While he was a good guy, he didn’t understand the concept of monogamy. He went from one woman to the next much like the way people changed their underwear.

“Bates, get your ass over here and help me with this,” Sean called from the truck.

Unable to contain her smile, Jessie glanced at the ground. Whenever Tony flirted with her, Sean went into his protective guardian role. Thanks to her close relationship with his sister, Charlie, Sean treated her a like a baby sister.

“I might take Grace if she’s not too tired. I think she’d like it.” Mack waved at a car that passed by the house.

“She loves it,” Jessie answered, looking back up.

“I should’ve known.” Mack readjusted his baseball cap, a habit he’d had for as long as she could remember. And she could probably remember every time he’d done it. Yeah, she’d had a big-time unrequited crush. Apparently, that hadn’t faded too much because he was still the hottest guy she’d ever seen.

Ah, who doesn’t wonder about the one who let you get away? If you’d like to snap up a copy of Mack and Jessie’s story you can find them at the following links.

And for more about Christina…

Thanks for much for visiting today, Christina!