This week on First Sight Saturday, Mariana Gabrielle shares a first meeting excerpt from La Déesse Noire: The Black Goddess, her historical romance featuring the daughter of an Indian paramour and a nobleman of England. Mariana Gabrielle is a pseudonym of Mari Christie, a professional writer, editor, and designer. Her fun fact is that she ran Denver, Colorado’s first regularly schedule poetry slam for several years in the 90s, and also started the slam in Charleston, South Carolina in 1995.

SETUP OF SCENE:  Kali Shaheen speaks to her new protector for the first time unchaperoned. 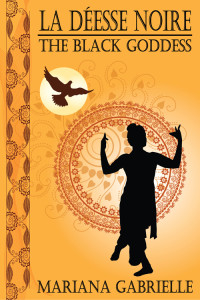 He motioned her to one of Mayuri’s prized Riesener chairs, covered in a puce, satin-band double damask so fine it showed almost no sign of being woven at all. He took a seat on the accompanying ottoman, sitting forward, elbows on his knees, far enough away she would not feel crowded. His face seemed perpetually curious, as though the world could never give him enough answers, even if he could find the right questions.

“You should understand you are not entirely unknown to me.”

Kali had not thought otherwise. Mayuri had told her Lord Fitzmarten had been inquiring after her well-being for months. Not her suitability for intimate congress, not the condition of her maidenhead, not her skill in music or dance—not her price—only her state of health and happiness. He had offered to meet her expenses, even her sister’s, if it would ease Kali’s way in the world, and he had never once asked to interact with her more closely. He had shown considerable displeasure, once with his fists, when other customers at the Masala Rajah had spoken of Kali in vulgar or lecherous terms.

“I had not pushed for an introduction before such time as you were prepared to take on a protector—you were so very young when you arrived in London—but Mayuri has been aware of my interest for some time. I have always found you exquisite, so terribly graceful, and hope very much you might accept my offer of carte-blanche.”

Acceptance was assured once she had given Mayuri control of the negotiations.

“However, it is rather abrupt to arrange contracts without ever once meeting. I do not wish you to believe I see you as merely a commodity.”

Kali spoke more freely than she had ever been taught. “Is that not what I am, my lord?”

Once the words left her mouth, she placed the back of her glove across her lips, as though she could push the thought back in. Her eyes widened when he grinned. His smile really was devastating.

“I do not want a mistress who sees herself as interchangeable with any other, or less than human. I would like to be able to talk to you, not merely take you to bed. Is that something you desire as well, or do you expect to hold yourself apart from me?”

She retreated to the comfort of her training, hands folded in a dainty twist atop her lap. “I can speak on many subjects, my lord. I am well educated, and will, of course, offer my intellect for your delectation, should you choose. It will be my fondest desire to please you in all things.”

He stood and ran his hand through his thick hair, mussing it, then paced to the fireplace and stared right through the Persian vases on the mantelpiece.

“I’m sorry. This will not work. I apologize for wasting your time.”

Kali sucked in a breath and fell back, stunned. When Mayuri had made it known she was entertaining offers for Kali’s virginity, he had offered any amount to be her protector. The contract terms were the most generous of any girl Mayuri had ever placed. Kali was not sure what had made him lose interest so quickly. She had only repeated, word for word, what she had been taught to say as far back as she could remember.

“My lord, I am confused. How have I displeased you?”

He sighed, his hand stopping halfway through his hair. He dropped it to his side before he turned back.

“I am not displeased—as such. Only this is why I have never employed a tawaif for more… formal… personal services before now. If I am to spend a great deal of time with a woman, I would have her engage with me, not tell me what she imagines I want to hear. I will not pursue an intimate relationship based on habitual phrases that leave me no room to understand who you are. The thought leaves me cold.”

“But—” She sat up straight again, as she had been taught. “I do not understand. A gentleman chooses a tawaif for his pleasure, for enjoyment, not… not for… companionship. Not for love. I exist to serve your needs, not force my own upon you.”

As she spoke, she remembered the pain that had consumed her mother every day she had lived without Birchbright. Of all possible futures, that was one Kali would never want. Living without love was her station in life, and this man had no right to try to persuade her otherwise.

She rose to leave the room, trying to leave ice trailing in her wake. “I believe you are right, my lord. I do not think we will suit at all.”

TO  LEARN MORE ABOUT MARIANA GABRIELLA