Each week I welcome a guest author to share a first meeting excerpt. Today, J.D. Faver brings us Bad Karma — well, not literally we hope — her romantic suspense/thriller featuring a super-smart heroine and a beach setting, perfect for a summer read!

Here is a fun fact about J.D. in her own words:   I spent 7 years actively racing catamarans off of the same beaches in this series. Though the other racers were out to beat me, no one ever tried to kill me…at least not so I noticed.

Sounds like fun, and definitely fits you into the “write what you know” category of smart authors. Now, on to the story. 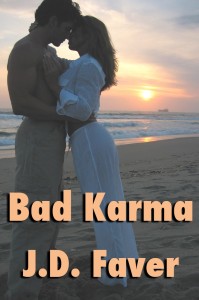 Setup of scene:  Cassie is a brilliant geek who has graduated with a Master’s degree in Biology, and she has a teaching job in the fall at the local high school. Her older sister, a nurse, has attracted a stalker and moved in with her at South Padre Island, so they are new to the island. She has taken a summer job to help with finances until school starts. Cassie believes that her extreme braininess make her less attractive to the opposite sex.

Cassie tied on her cross-trainers and sprinted down the stairs. She set out jogging in the sand.

Inhaling the fresh ocean air was exhilarating. She pulled the scrunchy out of her hair, letting it cascade around her shoulders, the tendrils lifting in the offshore breeze. She should be able to get in a couple of miles today and work up to something more challenging.

Her gait was easy, and her breathing unstrained. The soft white sand was resilient and packed closer to the water. Gulls circled over the shrimp boats as they chugged back and forth across the bay

As she jogged, she saw a distant vehicle, a red truck with oversized tires pulled up to the dunes and a lone figure standing in the surf. Not standing, he was casting a giant rod out into the frothing waves.

Cassie ran toward him, not intending to acknowledge him, but aware that this part of the beach was isolated and she hadn’t seen another human since she’d begun her run.

Not to worry. Nobody’s stalking me.

But then again, why borrow trouble? She would run by this guy and maybe he’d be gone by the time she made the return trip.

She drew nearer, watching him cast, his broad, powerful shoulders lunging into the effort of hurling the line out into the water. As his muscular arms arced overhead, his lats formed a perfect vee down to his butt.

His skin was browned and his dark hair had been trimmed close to his scalp.

Cassie jogged by, trying not to gawk, but the man didn’t notice, so intent was he upon his task. She felt a tiny bit disappointed that he didn’t pay any attention to her passing by.

She lifted her chin and continued on her way. Not the first hot guy to ignore me. Probably won’t be the last.

She jogged for a while, until she began to feel the first symptoms of fatigue and then turned back the way she had come. She had slowed down to a walk by the time she saw the fisherman again.

He had caught a six-foot sand shark and dragged it onto the beach. He looked up and grinned as she approached. “How was your run?” Dark eyes checked her out as she neared.

“Great!” She stopped short. He did notice me. A flush of pleasure washed through her. She returned his grin. “Odontaspididae”

“Excuse me?” He looked up, frowning at her now.

“That’s the kind of shark you caught.” Don’t blow it, Cass. Don’t flex your brains in front of Mister Hotness. She ducked her head and then tossed her hair as she glanced back up at him. “I must have read that somewhere.”

He smiled again. “All I know is they taste great on the grill.”

“Really?” She opened her eyes wide and gave him a flirtatious grin. She leaned over from the waist and pretended to examine the shark closer.

She stepped back. “Those things are out in the water?”

He nodded. “Yeah, but don’t worry. You don’t taste that good.”

She shot him a glance. “How do you know?”

He looked back at her, flashing his wide, white-toothed grin. “To a shark. Humans don’t taste that good to them.”

“Oh, I thought you were making a personal remark about me.” She had to fight to suppress the giggle struggling to erupt from her throat when she saw his face. He can’t feel intimidated now. Must think I’m dumb as a box of rocks.

He turned sharply. “Really? With your parents?”

The dark eyes roamed over her again. “You look very young to be out on your own.”

She sniffed. “Well, looks can be deceiving.”

The dimples quirked again. “Just how old are you?”

The voice screaming in her head shouted, ‘none of your darned business’, but the youngest Danforth daughter replied politely and truthfully, “I’m twenty.”

“Bite me!” She turned and began her run again, kicking her legs out like she had done when she was in high school track.

Surprised, she slowed to a stop. Mister Hotness had chased after her. She glared up at him, her lower jaw jutting out.

“Hey, I didn’t mean anything by that. Don’t get mad at me.” He reached out and put his hand on her arm.

Her eyes followed his muscular hand as he gave her arm a squeeze. “Watch the hand,” she enunciated carefully. “I have black belts in karate and tai kwan do. I can kick your ass all over this beach.”

“Really?” He chuckled softly. “Let me start all over again. My name is Javier Rios. My friends call me Javi.” He held out his hand to her.

She eyed it suspiciously, then put her hand in his. “I’m Cassidy Danforth.”

“I didn’t mean to offend you,” he said. “You’re just…young to be so old.” He held her hand between both of his.

She drew a deep breath and let it out all in a huff. “That’s a perfect description of me.”

“Again, I apologize for insulting you. I didn’t mean it that way.” Javier’s eyes searched hers.

“Apology accepted. I have to get ready for work now.”

He ignored the slight tug of her hand, holding her a little longer. “Where do you work, Cassidy?”

“Delivering. I’ve really got to go.”

He raised her hand to his lips and kissed her fingers, never taking his eyes off hers. “It was a pleasure meeting you, Cassidy Danforth.”

A herd of butterflies swirled up from her stomach. She grinned, in spite of her efforts to appear cool.

Slipping her fingers from his grasp, she turned and ran back toward their home. When she glanced back, he was still watching her.

Both of these characters seem to be strong and smart, a great start to any sizzling romance, not to mention the sandy dunes and awesome lats.

Check out these links where you can find Bad Karma and J.D. Faver.

Thanks so much for sharing the beginning of your couple’s romance with us, J.D. Faver. I know you’ll join me in welcoming any questions or comments. Visitors, remember to jog this direction every First Sight Saturday for a new first meeting excerpt from a new guest author.

Welcome to WordPress. This is your first post. Edit or delete it, then start blogging! END_OF_DOCUMENT_TOKEN_TO_BE_REPLACED

Rules of Writing Move On and Improve There are all kinds of rules for writers.  Grammar.  Formatting.  Spelling.  Punctuation – although did you know that colons and semicolons are old fashioned now?  (I miss them.)  Most of these rules are hard and fast, and you can remain safely consistent within your own body of work… END_OF_DOCUMENT_TOKEN_TO_BE_REPLACED

Olympic Images – beauty and achievement in motion Author’s note:  I wrote this in August but did not quite get the final touches done until now! I am wasting my weekend watching the spectacle of the Olympics on TV.  I have loved the Olympics since I was a little girl, and I keep watching even… END_OF_DOCUMENT_TOKEN_TO_BE_REPLACED

Is that a *bleeping* beaver?  – subtitle  Life In The Woods – sub-subtitle  When I Write Early on Saturday morning, when hubbie and I were fast asleep, our fifteen-year-old son’s voice roused us.  “Hey guys.” “Huh?  What?”  (this is us, barely coherent) “Don’t you hear that?”  He is now joined by his thirteen-year-old brother. “Hear… END_OF_DOCUMENT_TOKEN_TO_BE_REPLACED