This week I’m happy to welcome award-winning writer Laurel O’Donnell who is going to share a first meeting from her medieval romance Angel’s Assassin.  I gotta tell you, this hero has grabbed my attention already. Read on to see what I mean…. 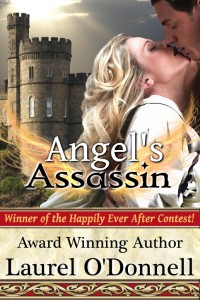 SETUP OF THE SCENE:  Just prior to this excerpt, Lady of Aurora of Acquitaine has been rescued from an attacker by a mysterious stranger. Who, pray tell, could he be? (A real hottie, that’s who!)

Last week I posted the second portion of a scene of from my new release, Vain, and here is the rest of it. Lily, the abandoned daughter of a tailor, has just sworn to Theophilus, Lord of Ribeauville, that she indeed knows how to sew. As she made her promise she placed her hand on… END_OF_DOCUMENT_TOKEN_TO_BE_REPLACED

Here is the second portion of the first scene in Vain. Last week we saw Theophilus, Lord of Ribeauville, stop by a shop searching for a tailor reported as having been scarce for the last few months, leaving his daughter alone. He has just asked Lily when her father left, and she tries to distract… END_OF_DOCUMENT_TOKEN_TO_BE_REPLACED

Vain, the third book in my Evolution Series, has just been released!  Here is the short blurb: A tailor’s abandoned daughter fashions a vain nobleman’s tunic, finding passion between the neckline and hem as misfortune forces her into his precarious aristocratic world. This series is set in Charlemagne’s empire in the 830s. Here is an excerpt… END_OF_DOCUMENT_TOKEN_TO_BE_REPLACED

Today I welcome Vijaya Schartz with book three of her Curse of the Lost Isle series. The book is called Seducing Sigefroi. (That is pronounced See-jeu-froa.) Vijaya recommends that you read books one and two (Princess of Bretagne and Pagan Queen) before you begin Seducing Sigefroi. After reading and enjoying book one, I concur.Amazon link to Seducing SigefroiAmazon… END_OF_DOCUMENT_TOKEN_TO_BE_REPLACED

I welcome Lynda Bailey today on First Sight Saturday, with her work-in-progress called Battle-Tested Love, book two in her contemporary romance series. I owe Lynda some extra thanks because I sort of hijacked her into visiting here!  Anyway, take it away, Lynda…. Thanks so much to Jill for hosting me today! As the blog title… END_OF_DOCUMENT_TOKEN_TO_BE_REPLACED

Back in the early days of historical romance, most heroes were what I would consider promiscuous or, at the very least, constantly sexually active.  The hero’s pattern is interrupted when the oh-so-virginal heroine arrives on the scene and in his heart.  He is suddenly repelled by the offerings of the barmaid he has tumbled regularly… END_OF_DOCUMENT_TOKEN_TO_BE_REPLACED