Each week a guest author shares a first meeting excerpt on a feature I call First Sight Saturday. Today we are joined by Lynette Sofras with her romantic mystery Killing Jenna Crane. Lynette’s fun fact is one I don’t think will every be repeated: she once won her baby’s weight in gold in a national caption-writing competition!  Maybe she will tell us in the comments who the caption was for and what she wrote?

Take it away, Lynette! 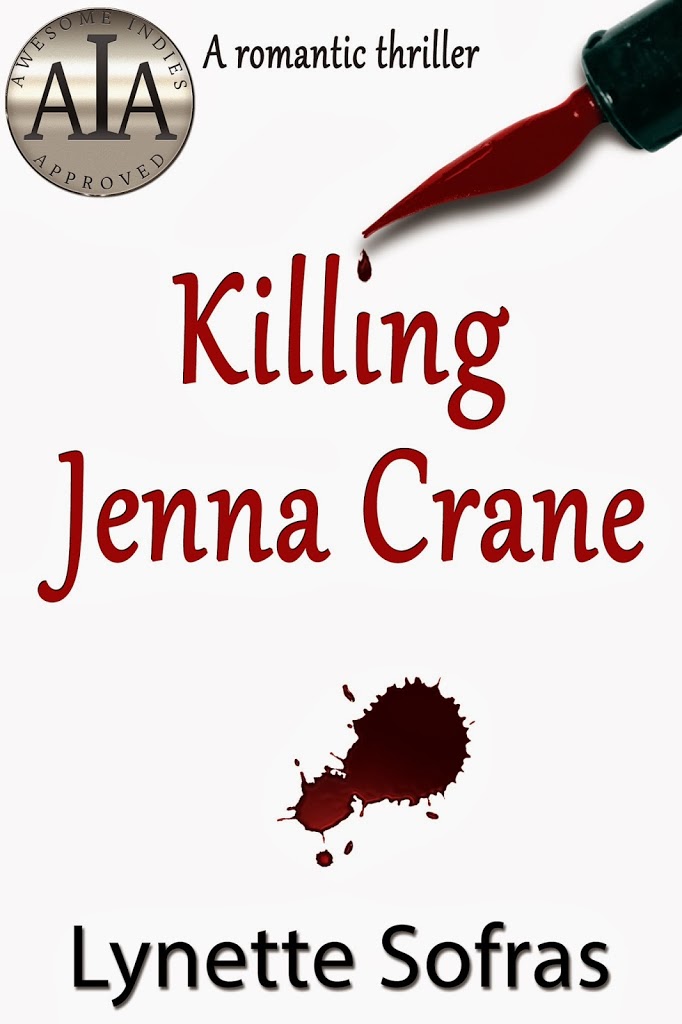 SETUP OF THE SCENE: I’ve chosen an excerpt from my foray into the darker side of romance, but please don’t be misled by the cover or title.  Killing Jenna Crane is a romantic mystery about a successful and rather arrogant male writer (Ellis) who is torn between the heroine of his popular fictional series and two other women in his life.  The first is his former girlfriend—the sweet, adoring Chloe, and the second the feisty sex goddess Emily, who appears to be his ideal woman.  Both women run rings around him, and neither is quite what she seems.  Only his fictional heroine (Jenna Crane) behaves as he wishes— and Emily believes she should be killed off, allowing him to focus on more serious writing.  When Ellis allows love to dictate his actions, his life begins to spiral out of control.

He first saw Emily walking down Waterloo Terrace late on a Wednesday afternoon the following March, just over a month ago now.  It had been a bitterly cold day at the end of a seemingly endless winter.  The snow lay banked up against his front wall and most of the trees in the garden had worn a naked twig-like appearance for so long that he’d forgotten what they looked like clothed in leaves.  He had an unobstructed view of the road from his study window.  It glistened with early frost in the pale afternoon light and in the gutters frozen slush had taken on a depressing look of permanence.
The muse had escaped him momentarily, dancing around his brain before skipping out of reach and, as he glanced up as if to pursue its flirty escape, he saw a vision of loveliness that he later discovered to be Emily.  She was all bundled up in in some silvery grey fake fur coat that fell to below her knees, the rest of her legs covered in long, pale grey boots with small heels.  A pale blue and pink striped scarf wound itself twice around her neck but still left long tails that bounced against her coat as she walked.  The scarf held her light honey-coloured curls captive to her neck, though naughty wisps of these escaped and teased her pretty face, glowing from the chill of the air and the brisk exercise.
Time seemed to stand still for a moment as he watched her, so full of life and secret energy, gliding through that frozen day.  She had some sort of soft leather bag, the same colour as her boots, slung over her shoulder and her hands burrowed deep into her pockets as she tripped lightly along the pavement.  Had he held his breath or somehow caused time to pause around him?
She walked almost to the boundary wall of his house and glanced for a fleeting fraction of a moment towards him, or so it seemed, before darting a glance to her left, then right and crossing the road.  Ellis gave a little gasp of happy surprise when he saw her head toward number 17 Waterloo Terrace, the house directly opposite, in which Chloe used to live.
His excitement mounted as he sipped his coffee, his eyes glued on the house opposite, waiting, hoping to catch another glimpse of the lovely vision.  Who was she visiting and how might he secure an introduction?  She could be a girlfriend of Dill or Rowan—not a good thought—or a friend or relative of Poppy.  For the next hour he stared at the house opposite, his computer forgotten and his coffee grown cold.  When darkness fell, he eventually shook himself out of the strange trance-like state induced by his intent staring at the same spot for so long.
Just when he was about to give up hope, the door opened and the three housemates tumbled out, with the lovely girl huddled between them.  They headed off in the direction of The Cottager, the pub across the green on the far side of Waterloo Terrace.  Ellis didn’t stop to think twice.  He pulled on his warmest overcoat and stepped out into the icy night air.
When he pushed open the doors of the pub, to be greeted by a welcoming blast of hot beery air, he spied them immediately.  They sat around one of the dark oak, circular tables in the far corner, already deep in animated conversation, although Emily seemed slightly aloof from the huddle.  She glanced up, almost imperceptibly, as he entered, dropping her eyes again immediately.  None of the others looked up and Emily immediately pretended she hadn’t seen him either.  Not wanting to seem over-eager, he wandered over to the bar where Gareth, the barman, acknowledged him with a nod.
“Ah, the bard of Bermondsey,” Gareth said in his usual jovial manner, his Welsh accent giving a lyrical lilt to his words.  “Bugger of a night, eh?  Usual, squire?”
Ellis nodded and lounged at the bar, making small talk as Gareth pulled his half pint and graciously accepted the invitation to join him in the same.  Ellis didn’t want to turn around too quickly and appear too eager to join his neighbours, like some desperate, lonely outsider.  It would be better if they saw him first, took him by surprise so to speak, and invited him over to join them; introduced him to their lovely new friend in their own way.  He kept his back turned and continued to chat to Gareth about the weather and little else of consequence.
After a while the door opened again, letting out the warm air and hustling in another freezing blast as Mac, another local, stamped his way to the bar.
“Brass bleeding monkeys out there,” the old man said cheerfully and to no one in particular, as he hopped from one foot to the other to restore his frozen circulation.  “Wouldn’t be surprised if we get more snow tonight.”
Ellis took advantage of the diversion to glance around.  The little group sat huddled together, heads close as they appeared to pour over some sort of map or document.  Irritated, he turned back to the bar, drained his half pint, waited for Gareth to serve Mac and then ordered another, which he gazed at gloomily, half listening to Mac and Gareth discussing some match or other.  Football bored him rigid, but he found it easier to feign interest than defend his aversion to the game.  That invariably provoked boisterous debate and worse, much worse, attempts to convert him to its dubious delights.
As Mac wandered off on one of his frequent excursions to the gents, Ellis, aware of a little flutter to his right, glanced around and found himself looking straight into the exquisite blue eyes of the girl from the street.
“Hi,” she said.  “I’m Emily.  I gather we’re going to be neighbors.”

Hmmm, will Ellis and Emily hit it off? To find out the answer, read Killing Jenna Crane, available at the following websites:

To keep in touch with Lynette, visit her website at http://www.lynettesofras.com/.

Lynette and I both invite your questions and comments, and I hope you will come back every week for a First Sight Saturday excerpt from a new guest author!

Each Saturday, I welcome a guest author to share a first meeting between two characters. I suppose Karen McCullough’s is a good choice for the first Saturday in December since the word gift is in the title, though the murder part doesn’t make it entirely festive. Karen shares with us her mystery with romantic elements,  A Gift… END_OF_DOCUMENT_TOKEN_TO_BE_REPLACED

My thanks to Joanne Myers for stepping in at the last minute to replace an author who jilted me at the blog altar. Joanne is sharing a first meeting excerpt from her crime/mystery book Murder Most Foul. Joanne believes in family values and following your dreams. The following scene takes place in the office of… END_OF_DOCUMENT_TOKEN_TO_BE_REPLACED

Every week on First Sight Saturday, a guest author shares an excerpt of a first meeting. Today I welcome author Kristy Tate with her lovely romantic mystery The Rhyme’s Library. Kristy Tate is a mother of six, but now that her children are grown she would like to start a Schnauzer farm. Unfortunately, Grendal, her lone… END_OF_DOCUMENT_TOKEN_TO_BE_REPLACED

I’d like to welcome Jamie Lee Scott to First Sight Saturday.  Jamie shares a first meeting scene from her book, Let Us Prey, one of her Gotcha Detective Agency Mysteries.  I say that any man who can make you forget you are at a murder scene is a keeper!THE SETUP:  Mimi Capurro, owner of Gotcha Detective Agency,… END_OF_DOCUMENT_TOKEN_TO_BE_REPLACED