Edie Hart visits today with her short contemporary romance One Bad Day. Any day that you have to wear a tacky costume is a bad day. Read on! 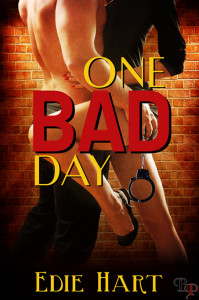 BOOK BLURB: Tessa is having one seriously bad day. After agreeing to dress as a cheesy mascot at a convention for her boss, her clothes get stolen, she gets chased through a sinister parking garage, and her apartment gets broken into and turned upside down.


Gray, an off-duty police officer, can’t resist the sexy legs he sees in costume at a hotel convention. When he catches sight of her running for her life through a dark car lot, he’s determined to find out what her story is and ends up promising to keep Tessa safe…even if that means taking her home with him.
EXCERPT

Gray stepped outside of the hotel ballroom hoping the air would be cooler out there. He hated stuffy gatherings. Hell, he hated weddings. How two people could think they’d love each other forever was beyond him. Gray didn’t do love. Which was why he was stag at a co-worker’s wedding. He’d originally planned to invite Monique, but several months back she’d become demanding and talked about moving into his place with hearts and flowers in her eyes. So he’d ended it. Deep down, he’d known that she didn’t really want him. She wanted any warm body that would take care of her. She had slowly been trying to mold him into some GQ tycoon, telling him what to wear, how to act, and even going as far as telling him what he needed to do career-wise.
A loud crash on the other side of the hall caught Gray’s attention. In the open ballroom across the way he saw legs. Glorious legs in strappy high heels. The beautiful legs were tangled on the floor and attached to an ass that was just as gorgeous. After taking a closer look, Gray realized that above the amazing ass was an enormous, white light bulb-shaped head with blue googly eyes. It had blonde hair and wore a glittery purple hat. The tangled-up legs and heels were flailing around in a pile of what looked like empty light bulb boxes. Several gentlemen nearby were quick to help Legs get her feet beneath her. From their smiles and laughter he could tell that they were all quite happy to be of assistance. Gray didn’t blame them.
He watched Legs find her balance in those high heels, and with a little wiggle and tug of her skirt she went on her way.
END OF EXCERPT
Here are links to the places you can find One Bad Day.
Book Links:
Breathless Press
Amazon
All romance
BookStrand
To follow Edie Hart, visit these sites.
Website
Facebook
Twitter

Here is the cover for my soon-to-be-released historical romance novella, Little Witch. (A novella is shorter than most novels but longer than a short story. At 49,000 words, Little Witch just brushes the edge of novel-length.) This is the 5th installment in the series and it chronologically follows Vain. If you haven’t read anything in… END_OF_DOCUMENT_TOKEN_TO_BE_REPLACED

Today we have an interesting excerpt from a historical romance novella by Ute Carbone called Sweet Lenora.  I say “interesting” because it is written in the first person point of view, and uses some antique word choices that make the reader really move back in time. Fun stuff! SETUP OF THE SCENE: Lenora Brewer has stowed… END_OF_DOCUMENT_TOKEN_TO_BE_REPLACED

My next book, Little Witch, book four in my Evolution Series, is with beta-readers right now, so I’m trying to spend the time I usually spend writing preparing for its release. As last week’s blog shows, I’ve been tussling around with my log line (one line description). I’ve also been fine-tuning the blurb that you’d usually… END_OF_DOCUMENT_TOKEN_TO_BE_REPLACED

Hi all! I always ask for help on my log line as I get closer to publication because there are people in the world who are so much better at tightening up a message than me. So, with Little Witch: Historical Romance Novella starting to go out to beta readers, here is my first day’s attempt… END_OF_DOCUMENT_TOKEN_TO_BE_REPLACED

I’m so excited that Redeemed is part of the BOOK LOVER’S BUFFET, featuring 175 books all priced at $0.99 from many online vendors, including some wonderful historical romances you can find here. I’m providing a brief overview of each in the list below. Check them out! I’m sure you’ll see some delicious reads you can’t resist.… END_OF_DOCUMENT_TOKEN_TO_BE_REPLACED

This weekend I welcome Tessa Stockton who is sharing a first meeting from her fantasy romance novella called Wind’s Aria. I have to admit to being totally envious of Tessa’s awesome author picture, so I had to show it right away! She looks very wise and creative, doesn’t she? Anyway, on to Wind’s Aria. First,… END_OF_DOCUMENT_TOKEN_TO_BE_REPLACED

Today on First Sight Saturday I welcome Meg Bellamy with her contemporary romantic comedy novella set in reality TV, TV Tycoons, which is a prequel to TV Bride. SET UP: The Leopard’s Lair is a reality TV show where new entrepreneurs present ideas and compete for successful, rich people to invest in their businesses. Jillann… END_OF_DOCUMENT_TOKEN_TO_BE_REPLACED