Each week I welcome a guest author to share a first meeting excerpt. This week on First Sight Saturday Cindy M. Hogan brings us Watched. Murder was just the beginning in this young adult romantic suspense which is FREE this weekend! Cindy’s fun fact is that she has been to every place she’s ever written about.

SETUP OF THE SCENE:  Christy and her friends are playing a game in the hotel’s game room when two hot guys enter the room and start playing Foosball. Summer, a popular cheerleader, spots them and goes to investigate.

“She returned to the group with the two guys trailing her, without going to the bathroom, of course.

“These guys are from New York,” she said. “This is Jeremy and he’s Nathan. Is it okay if they play too?” 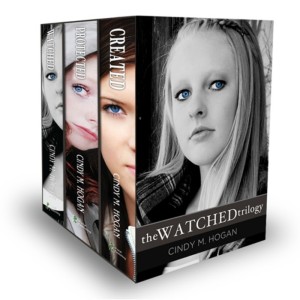 “Who has the most things left?” Summer asked, not skipping a beat. Her huge, brilliant smile blinding me.

Everyone looked at me, hello, so I counted my pieces of paper. “Eight,” I said, my face hot with renewed embarrassment.

“Eight? Man, Christy, you really haven’t ever done anything,” Alex said. “No wonder you wanted to come here.” He chuckled along with Josh and Summer. I even saw a smile break on Kira’s lips.

Alex. I wanted to cry. There was no doubt what he thought about me now. Stupidly, I looked up at him. He looked back at me. Even though I knew someone like him would never be interested in me, it hurt to have the slight glimmer of hope I’d had, dashed.

The game didn’t last much longer. I won, of course, my humiliation underscored.

The new guys were interesting, even Josh ended up playing nice. They talked sports with him and he jumped on board. It was getting late; Eugene and Marybeth headed up to their rooms. Despite how tired I felt, I knew what awaited me when I closed my eyes: a sword, a bloody head, and people chasing me, so I was in no hurry. I sat and listened to the others talk until I didn’t hear anymore.

When I opened my eyes, I was thrashing side to side trying to get out from someone’s grip when I realized who it was. Jeremy, one of the foosball guys, stood over me, his light brown hair catching the light as he held my arms.

“Wake-up!” he said. “Wake-up! It isn’t real. It’s a dream.” His voice gradually grew softer the more alert I became. I noticed that Rick, Kira, and Alex were standing right behind him. They all looked really concerned. No one laughed.

“Dreaming? No. You were having a wicked nightmare,” Jeremy said. “Do you remember it?”

“Not really,” I hedged. “Guess I better go to bed.” I didn’t really want to go, or answer any more questions, and was terrified of closing my eyes again.

“No, no, you stay here. I’ll be all right. Marybeth’s already there, isn’t she? You stay, I’ll be fine.” I really did want her to come with me, but I didn’t want to look wimpy either. But, what if someone was waiting for me to be alone to snatch me away?

I wished she’d insisted, but fresh, hot college meat had joined the group, and she really wanted to stay and get more of their attention.

I headed for the door, passing Summer and Josh playing foosball, only to find Jeremy on my heels.

“Hey, wait up,” he said. “I’m not letting you go alone after a nightmare like that. You must be scared to death.”

There was something about the way he talked to me that made me feel like he was a lot older than we were. It made me wary, but at the same time, I sensed he wanted to help me. He was very good looking and seemed nice, so I looked past him to the others, who were deep in conversation again, and slipped through the door he held open for me.

“Hey, do you mind if I grab a Coke?” Jeremy pointed at the door that led to the vending machines.

I waited in the hall until he came out, waving a dollar bill. “I hate these machines, they never take my money. You don’t happen to have a buck on you to trade for this one?”

He handed me his beat up dollar, and I stepped into the vending room. No matter what I tried, it wouldn’t take his dollar. I turned around, only to find the door was shut and Jeremy was blocking it.

“No luck,” I said. “Sorry.” I tried not to think about the shut door and small space we were in.

“Just a sec,” he said. He reached into his pocket. Maybe he had another dollar bill. Not even close. He pulled out a black Ipod looking thing and with the push of a button, the room filled with music.

I backed up as far as I could into the soda machines. I was getting creeped out. Music? He leaned in toward me, and I jerked away, slamming the back of my head hard into one of the soda machines. Did he want to make out in here? There was no way my virgin lips were landing on his. He grabbed my arms quickly, and whispered into my ear. I don’t know what he said, because I started to scream. His hand flew up to cover my mouth. His other arm surrounded me, trapping me against the machine, and he whispered, “Don’t scream. I’m FBI. I’m here to protect you, not hurt you.”

END OF EXCERPT
Remember, Watched is free this weekend! Go grab your copy at the following vendors.
Amazon           iTunes       Barnes and Noble
Kobo          Smashwords
If you want to find out more about Cindy M. Hogan, check out these websites or subscribe to her newsletter.
Cindy’s Blog     Cindy’s Facebook Page           Cindy’s Twitter
Cindy and I welcome your questions and comments. Come back every week for a new First Sight Saturday excerpt from a guest author.

Each week I welcome a guest author to share a first meeting excerpt. Today, J.D. Faver brings us Bad Karma — well, not literally we hope — her romantic suspense/thriller featuring a super-smart heroine and a beach setting, perfect for a summer read! Here is a fun fact about J.D. in her own words:   I spent… END_OF_DOCUMENT_TOKEN_TO_BE_REPLACED

Each week I welcome a guest author to share a first meeting excerpt. Today on First Sight Saturday, I’m joined by J.J. DiBenedetto with a New Adult Paranormal Romantic Suspense call Dream Student (Dream Series, Book1). And isn’t this a beautiful cover? A fun fact about J.J.:  I was married at Graceland — in the private… END_OF_DOCUMENT_TOKEN_TO_BE_REPLACED

Welcome to First Sight Saturday, where a new guest author shares an excerpt of a first meeting each week. Today I am happy to welcome Margay Leah Justice (awesome name) with The Scene of Humanity, her women’s fiction book that has some romance and suspense sprinkled in. Here is the setup of the scene: Silvie… END_OF_DOCUMENT_TOKEN_TO_BE_REPLACED

Every week on First Sight Saturday I welcome a guest author to share a first meeting excerpt. Today Jan Hudson is visiting with her lightly suspenseful contemporary romance Big and Bright which is Book 1 in the Berringer Brothers Trilogy. (Who doesn’t love finding a new series? Not to mention one with a hot cowboy….) Fun… END_OF_DOCUMENT_TOKEN_TO_BE_REPLACED

Every weekend, a guest author shares an excerpt of a first meeting between two characters on First Sight Saturday. This week we are joined by M.S. Kaye with her romantic suspense Fight Princess.  You’d better like this excerpt or else, because M.S. is a 4th degree black belt and instructor of Songham Taekwondo. SETUP OF THE… END_OF_DOCUMENT_TOKEN_TO_BE_REPLACED

Every week on First Sight Saturday I welcome an author to share an excerpt of a first meeting between two characters. This week, I’m pleased to welcome Alison Henderson with her contemporary romantic suspense called Unwritten Rules. Alison is a woman of many talents: she also designed the leggy cover! Setup of scene: This is… END_OF_DOCUMENT_TOKEN_TO_BE_REPLACED

Today on First Sight Saturday, I welcome Kim McMahill who is sharing her romantic suspense Marked in Mexico. SETUP OF THE BOOK: An idyllic Caribbean vacation turns deadly when hostages are taken at one of Mexico’s most popular Mayan ruins. The kidnappers believe the abduction will be a simple way to negotiate the release of… END_OF_DOCUMENT_TOKEN_TO_BE_REPLACED

I’m so excited that Redeemed is part of the BOOK LOVER’S BUFFET, featuring 175 books all priced at $0.99 from many online vendors, including some wonderful historical romances you can find here. I’m providing a brief overview of each in the list below. Check them out! I’m sure you’ll see some delicious reads you can’t resist.… END_OF_DOCUMENT_TOKEN_TO_BE_REPLACED

Introducing the Book Lovers’ Buffet. Load up, you won’t gain a pound! The Buffet’s “Bouquet of Books” sale will be open May 1-3. More than 175 ebooks, all reduced in price to just 99 cents, including the second book in my series, Redeemed, on sale for the FIRST TIME EVER.  Save in categories such as Young… END_OF_DOCUMENT_TOKEN_TO_BE_REPLACED