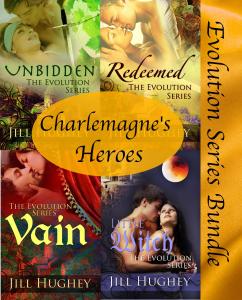 Tired of England and other settings worn out in historical romance? This bundle contains five romances set in Charlemagne’s Empire, a place with the rules of society romance readers love combined with a splash of medieval hero. Give the Evolution Series a try – in this bundle you get four wonderful stories plus a bonus short story at a wonderful discount!

UNBIDDEN – Rochelle of Alda, a feisty Franc noblewoman, expects to continue her industrious life managing her family’s estate. But when her emperor summons her to the palace to meet the skilled soldier she is required to marry for political reasons, Rochelle quickly engages in a battle for independence from David of Bavaria. Even as her own deceptions multiply she suspects another of also plotting against their marriage. To her surprise, and too late, David’s passion and patience begin to win her heart. Can their love survive the tangled web of her schemes and the secret adversary David refuses to see?

SECOND LOVE: A Short Historical Romance Story is volume 1.5 in the Evolution Series, chronologically falling between the last chapter and the epilogue of Unbidden.

When Ingrid helps a noblewoman escape, she is sure her master’s retribution will be severe. Instead, the woman and her husband quickly return to offer the widow and her young son protection far away in Francia. Their new home provides comfort and stability but does not relieve her inner shame at what she’d done to survive. Certain she does not deserve a second love, she resists the yearnings of her heart and discourages a worthy suitor.

A story told through a year of seasons, Second Love unites a man and a woman who both have pieces of their pasts they would rather forget.

Doeg has only two requirements in a wife and upon meeting Philantha he knows she is the one who will fulfill them. However, she has a requirement of her own that tests and eventually breaks down the barriers Doeg has maintained around himself for decades. They struggle during the day to revitalize his estate while the night-time awakening of their passion leads to binding love and redemption beyond their wildest imaginings. When an unexpected threat to Philantha emerges Doeg rises to the challenge, throwing off the shackles of his past once and for all.

VAIN – Lily had her life planned, neat and tidy as thread on a spindle, until her mother died and her father snipped at the seams of her future by abandoning Lily in their shop. A nobleman unexpectedly gives her hope when he brings fabric for a special garment. Lily survives on his first payment, and immerses herself in sewing and embroidering an incomparable tunic for him, as her tidy plan continues to unravel.