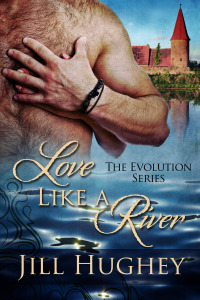 What is new bride Gratia to think when her husband’s been gone for six months and a woman claiming to be his lover attends her sister’s house party? Unsuspecting Leo returns eagerly home to a wife who isn’t there. When he finally locates her in a moonlit garden by the Danube, the reunion of these newlyweds sizzles with anger, accusations, and denied passion as each tries to find a path to the marriage they both desire.

Love Like A River is Book Six in the Evolution Series set in Charlemagne’s Empire and is a novella of 11,000 words. This sexy story features characters we see later in their marriage in the novel Redeemed.

Buy it now at Amazon. (Love Like A River was originally part of the Lost In A Kiss anthology by the Love Historicals authors.)

“It’s the first time I read most of these authors and I was pleasently surprised! Fast paced, heart warming, and full of action and romance!! I would greatly recommend this collection!! Happy readings!!!”

She met the stone wall, felt the radiant heat of what had been an unseasonably warm October afternoon. She pressed against that warmth, sighed, let her eyes flutter closed as her fingers curled over the chalky surface near her head. To be full body against such warmth….

A brush of sound was the only warning before calloused hands settled on top of hers. Her eyes flew open as the contact and a harsh whisper braced her in place.

“You should not be out here alone.” The man smelled like horse and sweat and the thick dust of hard travel.

“Move away,” she squeaked. She could not free her hands nor turn her head far enough to see her attacker.

“Are you waiting for someone?” he rasped as he dared move his body close to hers, close enough she felt a heavy belt buckle press at the small of her back. “Perhaps a lover will meet you here in the dark, far from the light of the torches outside the house?”

“Move away,” she repeated, glad her voice carried more authority this time, though not enough to make the cur step back. What should she do? With what could she threaten him? “My cousin, the Lord of Regensburg, will hear of this!”

“Are you under his protection, then?” The whisper sounded angry now. Good. He should know he assaulted a woman of means, not some unguarded peasant.

“I am a guest here,” she snipped. “I also have a husband and a father who will—”

“Ah, so you do remember you have a husband.”

A shiver coursed down her spine like cold, inky river water as the whisper resolved into a deep voice on the word “husband.”