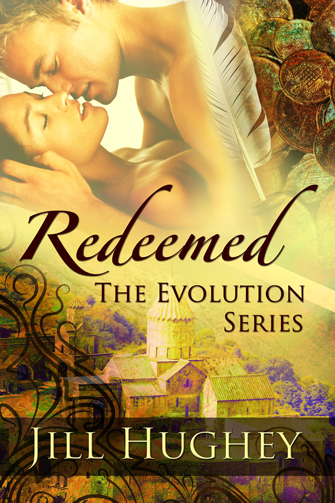 Travel to Bavaria in 834 where Redeemed combines the best elements of historical romance with an exciting new setting.  Book Two in the Evolution Series

The main character in the last book who I hated, I loved by the end of this book. Jill made him human and the romance never fails to disappoint. A must read in this series. – Julie Wishnow

Redeemed’s heroine, Philantha, was not the type of character I would generally like, yet I loved her. She is soft, resigned to life, and willing to be subservient to “her lord.” But, it turns out, Philantha DOES have one dream and does have the strength to pursue it. If you met Doeg in Unbidden, you will love knowing the rest of his story. – Natalia Erehnah

It was the smell that hit her first, a nauseating combination of cooking odors, rodent urine, and dust. Aunt Begga came up beside her. They clung to each other’s hands, mutually appalled at the milieu before them. The hall was spartan and filthy and filled with a haze of smoke and pestilent vapors. Food remains and grease covered the surfaces of the table and its accompanying benches, though the idea of a person actually eating here made Philantha gag a little. The cushions on the chairs around the fire sported burn holes and stains to the point that she could not even begin to speculate what their original color may have been. Below them, she could see just enough of the floor beneath a layer of mud and food detritus to know it was stone, and around the edge, where it met the sooty, spider-webbed walls, a drift of grime softened the intersection to a gentle, disgusting curve.

“My God, Aunt Begga, the house is a pigsty,” Philantha blurted, her usual reticent manner completely overcome by the rank filth. Her heart dropped into her already churning stomach. She knew immediately that she’d just ruined everything. After two days hard travel she’d not even gotten her cloak off before destroying her opportunity. A dirty house could be fixed but a direct insult to the master of the house was probably irreparable. A quick glance over her shoulder confirmed her fear. Her host stood just behind them, bent slightly at the waist, obviously having heard her disparaging comment

Before she could begin to apologize, he froze her with his piercing eyes. He studied her while nodding slowly and assessingly, even moving up beside her so he could look her full in the face.

He must be deranged, she thought. Yet she couldn’t look away. He exuded expectation, his gaze entreating as though he hoped she’d speak again. But between the mortification of her last utterance and the chill of his stare, she could not force her mouth to work.

Aunt Begga finally broke the trance, exclaiming “Ach!” with her usual phlegm. Doeg’s eyes flicked to the old woman who pointed at the left wall. “I just saw a mouse run to its little nestie under those steps.” Her aunt dropped Philantha’s hands to march toward the steep stairs that clung precipitously to the left wall, their whole length elaborately draped in webs and dust. Begga brandished the walking stick like a weapon as she peered beneath the first step then struck, rewarded by small squeaks and the soft crunching sounds of tiny bodies. “Guy! Go find a cat. This house has great need,” she called.

“I am a clerk, Aunt Begga, not a housemaid,” Guy retorted as he strode across the hall. “Clerk to the manager of this whole estate, and I do not fetch cats!”

“Do not backtalk me, boy. Pretend you are a stablehand and go find a cat. Every barn has one.”

“No,” Guy replied as he disappeared into what appeared to be the kitchen. Aunt Begga shook her stick at him. Little mouse bits scattered off the end to be absorbed among the general filth on the floor.

The master of the house watched the squabble with rapt attention. His steady expression did not even twitch, yet Philantha sensed increasing eagerness. His cold stare swung back to her and she knew it was her turn to do something appalling.

Philantha sighed at this odd predicament. The least she could do was find a way to clean up the mess her aunt had made before the mute observer sent them back to Martin’s house. She noticed a young boy peeking out the kitchen door and smiled at him. Philantha knew how a household worked. One did not send the master’s clerk after cats. One sent the child of a servant. She beckoned to the waif while digging in the folds of her tunic for the little bag concealed there. His pace quickened when he saw it, though she noticed he kept a wary eye on the observant man still frozen behind her. She held out a coin, a trifling bit of money, as she bent to speak to the lad. “What is your name?” she asked.

“Do you know where to find some good mousing cats?” she asked secretively.

He nodded, his clean little face out of place in this filthy cave of a room.

“Will your mother mind if you go to find some?”

He shook his head. “My mother don’t live here no more. Cook lets me stay with her.”

Philantha figured there was more to that story but focused on the task at hand. “I will give you this coin if you can bring three good mousing cats into this house before dark.”

Gunter bobbed his head up and down excitedly before he scampered back to the kitchen, arms and legs pumping. She could hear his animated babbling before another door opened and closed. Philantha braced herself. She’d leapt across the bounds of hospitality, but there had been no help for it. She turned to face her host, not surprised to find his cold stare still on her. She’d felt it these last few minutes and known he’d never stopped mentally recording observations of her since that first impetuous outburst. Yet there was something there other than ice, an intense curiosity as though he could not wait to see what she would do next. And what could she do after exhibiting such rudeness but apologize?

“I beg your pardon, sir,” she said to his chin. “It was much too presumptuous of me.”

He brought his right arm up to cross it with the left. “It is fine,” he said shortly. “Do continue. Do whatever you would like to assure your comfort.”

A flush rose to her cheeks as she dropped her head in mortification. “Now you are just taunting me.”

“No,” he said sharply. His hands balled into fists then pointedly relaxed. “No,” he said again but with great care, “I mean what I say. Do what you think should be done.”

She could not stop herself from glancing at his face. The man was in earnest. He wanted her, as a guest, to change what should be changed about his house. That was what he had been waiting for. The list of tasks unfurled in her mind like the tapestries that should be softening the walls of this hall. The list was long. And it would take days. No, weeks. “It is nearly dusk,” she answered. “There is little that can be done today. But the weather is very mild. If you do not mind, I would open the door to let some sweeter air into the hall.”

He lowered his chin in assent. She eased past him to wrench the door open, cringing at the screech as she swung it wide to catch the last of the afternoon air. “Those hinges could use a daub of grease,” she noted, mostly to herself.

“What is your name again?” he asked.

She whirled. “Oh, sir, I am sorry. I thought Guy would have told you.” It just got worse and worse, didn’t it?

He waved her apology away impatiently. “He probably did tell me. Your name?” he demanded.

“Philantha, you will marry me.”