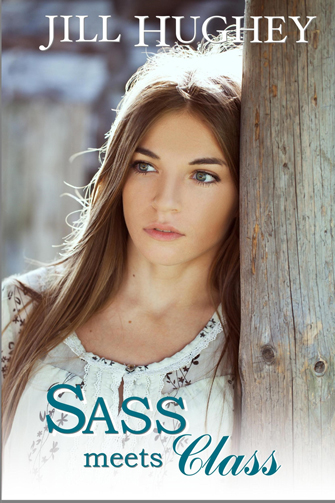 Susan Mellott doesn’t pay much attention to the outlandish Englishman who joins her family for the last leg of their overland journey She considers Alexander Dorcester a source of bowing and boot-polishing amusement until he helps scare off a couple of curious Apaches on their last day on the trail. The Brit’s and her paths part in Gateway, and even though she knows he will be visiting his parents just five miles away, her family’s new general store requires so much attention she mostly forgets about the Redcoat. Until he arrives to do some shopping with his oh-so-proper mother. He returns alone the next month, then again the week after, and the week after. Not sure of his intentions, Susan decides to encourage Alex a little. Next thing she knows, he’s bolted for England.

Or has he? Time and distance and secrets cannot end a friendship that is meant to be love.

Sass Meets Class. A sweet romance in which two mismatched people discover they are just what the other needs.

Sass Meets Class. The perfect title for this book because that’s exactly what it is. A sassy heroine and a classy Brit.

I love this author’s writing. It’s crisp and clean. Her descriptions are so vivid you feel as though you’re in the scene and riding right next to her snarky heroine, Susan. This girl is a hoot! The dialogue is cute and not the least bit overdone or stuffy as is often the case with some of the novels written in this genre. I love the way the relationship developed between Susan and Alex, the very British gentleman. The contrast between the two will have you laughing out loud. His well-off mother is an arrogant snob who believes the world should revolve around her. But Alex has a strong mind and knows exactly what he wants. This novel has deep conflict and just the right amount of sexual tension that will have you falling in love all over again. For sure, this is a winner! – SarasReviews

I’m a big fan of Regency romances and I’d recently read some of this author’s other books, which I’d enjoyed and this book sounded intriguing so I bought it. It was incredibly different and different to what I’d expected. It is a clean romance for those interested but the story really hooked me. – Sandy Milan

Susan fired wide again. Her Indian laughed and hooted. Alex swung around, barely pausing to aim before blasting the bush away beside the Apache’s head.

“That shut him up,” Susan complimented.

Alex thrust the pistol at her. “Load it.” The Indians fired at the leisurely pace required by hand-loading their weapons. Alex defended both sides of the wagon while Susan kept their guns primed and ready. A bullet hit the water barrel in front of Alex. He barely noticed. The trunk thudded opposite Susan. “No, sir,” he muttered as he aimed the Winchester. Pow, thwok.

Susan’s Indian shrieked, dropped his gun, and gripped his bicep. He glared through the low brush. Alexander shouted at him. “You do not shoot at women!”

She stared, open-mouthed, at the Englishman. He’d set his sweat-covered jaw into a stubborn clench, his hair hung in dark disarray around his face, and he shook his gunless fist toward the wounded warrior. He’d pushed up his shirtsleeves, exposing hairy forearms contoured by long lengths of lean muscle. “Alex!” she exclaimed, “You’re human! You’re all riled up!”

He frowned at her, grabbed the pistol, fired it, handed it to her for reloading, and picked up the rifle again.

Neither Apache was shooting any more. They crouched, silent, more intent on their surroundings than the guns under the wagon until, as if of one mind, both slunk away in the direction they’d come from, soundlessly fading into the low scrub. Alexander crawled toward the back of the wagon to observe.

“Now what?” Susan asked. She leaned forward on all fours to get a better look, but the instant her hands touched the ground she sucked a sharp breath between her teeth.

Susan stared at her sand-blotched right palm. “My hand hurts. It got wet somehow and the dirt’s sticking to it.” She shook it then blew on it, but the dirt stayed.

“Here, let me see.” He crawled back to her side. She tentatively offered a view of her palm. “We need to clean it. Put it under the water leaking out of the barrel.”

“Ouch! Oooh, that stings.” When he’d rinsed the sand away, he took a moment to roll the barrel over so it would stop losing its precious contents then gently cradled Susan’s hand. Broken blisters covered her palm, thumb, and fingers.

“How did you burn yourself?”

“The pistol?” He glanced doubtfully at the accused weapon.

“When I grabbed the barrel –”

“Why did you touch the barrel?” The ‘you stupid idiot’ hung in the air, unspoken.

“Because you were holding the other part,” Susan spat back.

Alex’s eyes widened in horror. “I did this? How could I have been so unchivalrous?”

“I don’t know that word, but you were perty busy saving our lives. Darn, that smarts.” She tried to withdraw her hand from his. He held tight and blew on the damaged palm. The sensation sent a shiver up her spine. Their eyes locked, regal English blue bound up with simple American brown.

“I am sorry I hurt you,” he murmured. Susan swallowed, then nodded. He looked down at her hand again and gently ran the pad of his index finger across the unblemished tips of her four fingers, letting it drift off her pinkie. The unexpectedness of the caress swirled around them in the heat of the afternoon, and he stared at her hand as if it wasn’t supposed to be there.