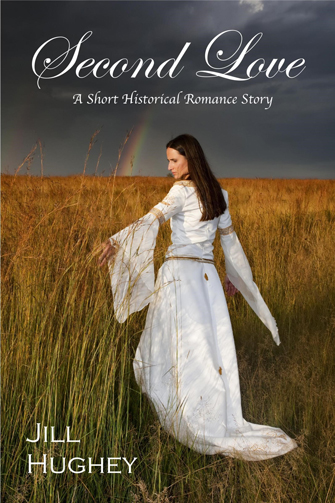 When Ingrid helps a noblewoman escape, she is sure her master’s retribution will be severe. Instead, the woman and her husband quickly return to offer the widow and her young son protection far away in Francia. Their new home provides comfort and stability but does not relieve her inner shame at what she’s been forced to do to survive. Certain she does not deserve a second love, she resists the yearnings of her heart and discourages a worthy suitor.

A story told through a year of seasons, Second Love unites a man and a woman who both have pieces of the past they would rather forget. Second Love is a SHORT STORY of about 10,500 meticulously crafted words. It is volume 1.5 in the Evolution Series, chronologically falling between the last chapter and the epilogue of Unbidden.

Buy it now on Amazon, Barnes & Noble, Smashwords, and Kobo.

I don’t usually buy short stories, but I loved the Evolution Series and wanted to support the author. As the description says, it provides a happy story for two deserving characters introduced in Unbidden. For a short story it has a very strong theme of overcoming our pasts to become a better person and be happy. Worth it for fans of the series! – M. Palmer

Ingrid forced herself to rise and dress. There was no rest for servants, especially new outsiders. She wandered into the hall, not allowing herself to detour to the brisk fire, then cautiously entered the smoky kitchen, already full with the cook, the clerk, and the housemaid she’d met yesterday after meeting Ardo, the overseer. She struggled to remember the other names. Oh, yes, cook was just Cook, the same as at Atrum Calx. Gilbert, the skeletal old clerk, sat hunched at the table. The housemaid, Ruthie, stopped forming bread dough into trenchers to regard her with a patronizing purse of the lips, confident she would not be on the bottom rung of the household ladder any more.

Ingrid sighed. “Can I make those?” she asked, trying to sound eager and willing. She was not afraid of hard work and would do her best for her rescuers. She was just so very tired after the journey.

“Eat some breakfast first,” Cook said as she slapped a pan of salted pork on the table, soon followed by a shallow bowl of dried apples softened in warm water and sprinkled with a brown spice that smelled heavenly. Ingrid’s mouth watered but she waited until the other three had taken some food onto baked rounds of bread similar to those Ruthie prepared.

The four of them ate silently at the small table. Ingrid stifled moans at the quality and amount of food. Meals had been lean in Drogo’s kitchen. She licked her fingers and used the wet tips to gather every last crumb from the tabletop.

“Set some aside for your boy,” Gilbert croaked.

Cook nodded. “Our lady said to make sure you know you can eat as much as you want. We all can.”

“You’ll need your strength,” Ruthie added. Cook rolled her eyes as she turned to put the newly-formed trenchers into the embers for baking.

Ingrid hurried to save some food for Otto, then followed Ruthie into the hall to prepare the table for the master’s family. They brought in wood for both the cooking fire and the central hearth before David and Rochelle descended the sturdy wooden stairs. The master and lady greeted her kindly, looking as weary as she felt. She retreated to the kitchen where she wiped out the pots for Cook.

She’d barely finished the job when Otto’s crying rang through the wall. “I’m sorry,” she murmured as she passed by the master’s table, certain they would be annoyed at this disruption to their peace.

Otto sat on the edge of the narrow bed, groggy and confused. His fingers clutched at her as she gathered him on her lap to nuzzle his head. The unpleasant smell of his hair reminded her they both needed baths. She wondered how and where she would accomplish the task. So many questions. “Are you hungry?” she whispered.

“Yeth,” he said with his endearing lisp. Always.

“Cook made a good breakfast today,” she said. She dressed him and pulled his knotted cap over his ears. “You have never tasted such sweet apples as these,” she assured him. He tried to cling to her but she set him down on his feet, taking his hand to guide him through the hall. He dug in his heels when he saw David smiling at him from the table. She swung Otto up on her hip, keeping her eyes on the floor as she scurried into the kitchen.

A gangly teen boy stood there talking to Ruthie. He watched with curious brown eyes as she settled Otto down to eat.

She ducked her head to acknowledge him, afraid to do or say anything until she understood his position here. He had been mentioned last night, and both the lady and the master betrayed fondness for him. For all Ingrid knew, he was a relative, though his simple clothing suggested he was a peasant, like her.

Ruthie filled the gap. “Samuel’s father, Bertrand, runs the vineyard. And the master has taken special notice of him,” she added in a tone implying she may have also.

Samuel flushed at the praise. Ingrid cocked her head. She had not seen a male of his years blush since her own dear Odilo had courted her. Lord, how young they had both been, with her not yet fifteen and he a wise sixteen. Her eyes prickled. After him, in the sordid hall at Atrum Calx, men’s faces had only reddened due to drink, lust or anger, even if they were barely on the cusp of adulthood like this young man.

She realized she and Samuel were staring at each other. She turned to attend to Otto. The boy was making a mess on the table as he tore at his bread with his tiny teeth. He growled in his throat, like a puppy gnawing the last bits of meat from a discarded bone.

“Is he your son?” Samuel asked, ignoring Ruthie when she protested that she had already told him so.

“Yes. He is three,” she replied, staring at the top of Otto’s head.

“You seem young to have a boy that old.”

She frowned at the stupid statement.

Not dissuaded, he asked, “Are you a widow, then?”

She looked at him sharply. “Yes.” She limited her answer to that, though her mind seethed with hot words. Of course I am a widow. Do you think I would leave my husband behind in Bavaria? Or do I look like the sort of girl who has a baby without a husband? The angry thought deflated her piousness. She wouldn’t have been the first serving girl at Calx to bear a bastard. Only committing other sinful acts had saved her from the inevitability of that particular shame.

“Well,” Samuel said awkwardly, “welcome to Alda.” He dropped his chin, chagrined by her glare. The scent of him swirled around her, as notable as his curiosity when he passed behind to enter the hall. Warm greetings echoed, confirming his special distinction with her new employers.

She would steer clear of him. She wanted no special notice from him or his masters. Ruthie could have him.