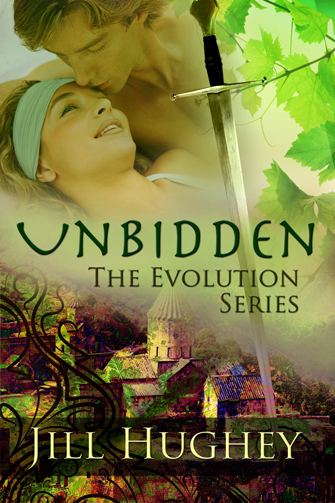 Rochelle of Alda, a feisty Frank noblewoman, expects to continue her industrious life managing her family’s estate. When her emperor summons her to the palace to meet the skilled soldier she is required to marry, Rochelle engages in a battle for independence from David of Bavaria. As her own deceptions multiply, she suspects another of also plotting against their marriage. To her surprise, and too late, David’s passion and patience begin to win her heart. Can their love survive the tangled web of her schemes and the secret adversary David refuses to see? A whirling romance in Charlemagne’s empire and Book One in the Evolution Series.

Buy it now on Amazon, Barnes & Noble, Apple, Smashwords, Kobo, and CreateSpace.
Listen to the audiobook on Audible, Amazon, and iTunes.

I don’t give too many five star reviews, but “Unbidden” truly deserves five plus stars. Jill Hughey’s writing pulled me into the 9th century and I fell in love with David and Rochelle. As expected, the story line has ups and downs, but the strength of both characters, and especially David’s respect for Rochelle, kept me turning each page as fast as I could read and savor every word. I look forward to reading the next book in The Evolution Series. – Martha B.

At first, I was seduced by the accurate historical setting. Then the characters took me on an exciting ride. I love the way the romance develops in small touches. When two characters are forced to get along by a higher power, revolt is natural. But these two have interesting weaknesses as they learn to like and love one another, and despite their respective strengths, they both make mistakes. The plot keeps the action going and the feelings are raw. As far as medieval romance goes, this is a perfect example. I can’t wait to read the next book. Job well done. – Vijaya

Completely taken in by the storyline. Great cast of characters with wide ranges of personalities. Keeps you turning the pages. wonderful, engaging, humorous, romantic and more. – Amazon Customer

I loved David, a man after my own heart. He is strong, attentive, protective and handsome!! What more could a gal ask for?? Rochelle on the other hand is a strong-willed, unforgiving young woman who has stolen David’s heart. The story only gets better and better as it is read. I stayed up all night to finish reading it and was happy to pay the price the next day at work. I love, love, love this couple and the outcome of this story. A MUST read!! – Kindle Customer

She was loyal to Alda. She’d never thought much about her loyalties beyond that. The sun rose every morning, she ran Alda, and Louis ran the Empire. It was not something to think about, it just was. Yet the emperor did not want to hear about loyalty to her home. “I am loyal to you,” she said quietly, not knowing what else to say.

“Good. Any more disagreement and I will take your land and throw you in a convent. Insolent chit,” he muttered.

“A convent!” Rochelle protested, her voice a great deal louder than etiquette or good judgment allowed.

Theo cleared his throat over her words. “Give me a moment to talk with her.”

She looked up as the emperor stopped pacing. His head swung heavily on his neck toward Theo. “Not you. Him.” He pointed to David. “She is his responsibility now. If he cannot get her from here to that chapel, I will find someone who can.”

Someone shouted, “A Bavarian? He is giving her and that rich estate to a Bavarian?”

The room erupted in arguments and seemed to tilt before Rochelle’s eyes. A shift in perception. Perhaps she had landed on the moon, summoned there by Louis. What she once understood to be real was like a daydream, an illuminated drawing in one of her father’s books. She needed time to make sense of it, but something – someone – was dragging her back. That someone was grabbing her elbow again, pulling her to her feet, feet of heavy, lifeless clay. She staggered. His hands caught her waist, surprisingly gentle as he supported her from behind, so close she could feel warmth coming from his body. “Steady,” he murmured.

“The floor is so hard,” she breathed, mortified at her physical weakness. “I can barely feel my feet.”

“Shall I carry you?”

“Of course not!” she hissed, anger bringing reality back in sharp relief.

She tried to pull away. He held her, his voice at her ear. “Let us go to the chapel.”

“I am not going there. Not with you. Not with anyone,” she declared over her shoulder, beginning to struggle in earnest against his hands. “It is you he has chosen, is it not? I will not have it. I will not have you. Do you hear me?”

He spun her so deftly she felt dizzy again. “Look at me,” he ordered.

She tried to focus on his face, but she felt crazed, like a bird trapped in a windowless building, a tiny bird surrounded by giant peacocks. The noise in the room escalated as the noblemen argued amongst themselves about the emperor’s plan for Rochelle and her estate.

David spoke to her urgently, “I know you are overwhelmed by what is happening to you. Listen to what I am telling you, you must retreat.”

“What? What are you talking about? Retreat?” She forced herself to look at him, at the steady brown eyes, so calm amidst the chaos around her.

“You cannot win here today. He will take everything from you. Do you understand?”

“No, no, no, this cannot be happening. I will not let this happen! This is my life!” She pushed against him with all her might. She might as well have tried to push over the stone wall around the palace.

David gripped both of her biceps to give her a little shake. “Rochelle, you cannot win here. Not today. Not against him. He will not back down in front of all these men. Now, do as I say.”

He glared at her. She knew what he was doing. Men had ways to work around the plans of women. He would change tactics now and so would she, and on and on they would go until she got what she wanted, which was to be left alone.

“What is the most important thing in the world to you?”

It was a ridiculous question in the present circumstance, but the answer was so easy, so instinctive, it slipped out of her like an exhalation. “Alda.”

“Are you prepared to give it up in the next half a minute? The decision is that simple. The way back to Alda is through the palatine chapel. Any other path leads to a place not of your choosing, and you will never get your estate back.”

“Oh,” she moaned, not in acquiescence, but in disbelief. He was not doing this right. “This cannot be happening.”

“It is. You will come to accept it later. You must submit to the emperor now. And, by all that is holy, do not insult him again.” David turned her to face Louis again, pulled her tight against his side, her form stiff as a wooden toy. “Sire, if it pleases you, we shall go to the chapel,” he announced.

A false smile widened Louis’s mouth. “It will please me very much to regain order in this meeting, after the lovely Rochelle asks me to excuse her rebelliousness.”

Theo drifted behind them to whisper. “A deep curtsy, and simply say ‘I beg your pardon, sire.’ That is all.”

David applied ever so slight a pressure on her hips until Rochelle dipped into an awkward bend at her knees.

“Your pardon, sire,” she muttered, wishing she could swallow her own tongue. She would never utter the words I beg. Not for Alda. Not for anything.

“One of my clerks will meet you in the chapel with the documents. A moment of prayer would benefit both of you greatly upon such a momentous occasion.” Louis turned away with a dismissive flick of his beringed hand.

“Lead us out of here,” David said to Theo, his authoritative voice cutting through the roar of madness in her ears.