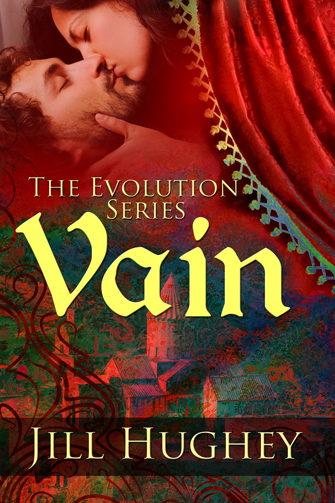 Lily had her life planned, neat and tidy as thread on a spindle, until her mother died and her father snipped at the seams of her future by abandoning Lily in their shop. A nobleman unexpectedly gives her hope when he brings fabric for a special garment. Lily survives on his first payment, and immerses herself in sewing and embroidering an incomparable tunic for him, as her tidy plan continues to unravel.

Book Three in the Evolution Series

Vain is, like the product of its heroine’s loom, a beautifully woven love story. – HistRomQueen

I love this series by Jill Hughey. The early medieval setting is a refreshing change, the characters memorable, the plot intricately woven. Theo is a vain man who thinks he has everything under control. He’s handsome, loves to dress in fine clothing, and is proud of his noble standing as the well respected Lord of his community.

Everything comes unraveled when he falls in love with a woman he considers far below him in social standing.

Kept me reading well past my bedtime and it’s a book I would read over and over, something I rarely do. – OnTheMark

I chose to read this book above all other things I could be doing on a Saturday. I enjoyed it because it was not simply a book about lust. It was about characters, lives and recovering from impossible situations. I found myself almost at the point of tears several times during the novel. Hughey created so much sympathy between reader and character, it was impossible not to become worried for Lily and Theo when things seemed dire, and proud in their individual triumphs. – Long Ago Love

The commanding figure who filled the narrow doorway reinforced her hope and spurred foreboding at the same time. He was a consistent customer, and their wealthiest. He spent his money freely with all his merchants, as he should. Only the Lord of Ribeauville could wear such an outrageous fur cap without eliciting howls of laughter all through the town. His citizens did not even snicker, firstly because he was the lord of the townfolk and all who lived on a wide swath of countryside surrounding Ribeauville, and secondly, because the spata hanging from his well-crafted belt expressed more about the man than the tassel of silk dangling from his hat.

Lily sized up the parcel tucked under his arm as she rose respectfully from her chair. The lord of the town only visited the shop to conduct business. Yet today his sharp eyes darted around, noting the bare shelves that once held bolts of cloth and the small loom, empty of warp or weft. He peered at the door to the living quarters before settling his penetrating hazel gaze on her.

Lily fingered the leather needle case hanging at her waist. “Good day, my lord,” she said, greeting him as if she were the proprietor of the shop. What choice did she have?

“And to you,” he replied with a slight nod of his head. He glanced around the shop again. “May I speak with your father? Have a commission for him.” He lifted the bundle wrapped in rough flax cloth as proof.

A commission. Work. Lily’s nails cut into her palms as she resisted yanking the promising parcel from his hands. “I am sorry, my lord. Father has gone to Strazburg for supplies.” She indicated the desolate shelves with an apologetic smile. “You may give your order to me. I will see that your garment is made to your liking.” Her words were confident, though her knees quivered. She pressed them together so he would not see her trembling.

The Lord of Ribeauville studied her. “When did Willis leave?”

“In the morning,” she answered. He arched one thick brow, hearing the vagueness in her response. She rushed to fill the questioning silence. “Please, my lord, may I see what you have brought? You always choose such beautiful cloth for us to work.” His lips pursed within the circle of the beard he kept neatly trimmed beside clean-shaven cheeks. She knew that he knew she was playing on his vanity. “Is it linen or wool?” she prodded, desperate to avoid questions about her father.

“Wool,” he relented as he placed the bundle reverently on her father’s worktable. “I have never seen so deep a burgundy before.” He untied the twine and unfolded the flax to reveal a bolt of cloth that burned almost black in the shadows of the shop.

“Oh, my lord,” Lily breathed as she approached.

He flipped the mass to find an end then held out the corner for her inspection. The yarn had been spun impossibly fine, then woven tightly to produce a thin fabric that flowed over her fingers like a sheet of burgundy water. She lifted the material toward the window to admire the rich red in the fading dusky light.

“Not really a spring color,” her lord noted doubtfully. “I wanted a tunic for Easter, but perhaps this cloth will not do.”

“Blood of Christ,” Lily whispered without thought, then turned to see if she had offended him. He entered Ribeauville’s beautiful church on the hill as often as he should, though was not known to be a particularly pious man. Perhaps he would not like the idea of wearing holy blood.

Theophilus cocked his head to one side. The corners of his eyes crinkled with the suggestion of a smile. She’d always liked how his eyes drooped down on the outsides, implying there might be a softness to him, a sympathetic nature that only showed in the soulfulness of the shape of his eyes.

“A tunic, then,” Lily plunged on. “What did you have in mind for its structure?”

He threw his cloak back over his shoulders eagerly, keen as always to plan a new garment. “I saw a man in Thionville last autumn wearing a tunic with a squarish neckline and short sleeves, but it just flowed to his knees. Not in a feminine way,” he corrected quickly. “Even belted, it moved with him like the skin on a stallion. The weight of the fabric was similar to this, so I hoped your father could make one for me.”

Excitement pulsed in the room. Lily needed this job, yes, but the creativity, the possibility of fashioning the garment that Theophilus described immersed her in an energy she had not experienced for months. She unwound a length of redness, let it drape over her arm. “I see it,” she said simply, because she did.

He scratched his ear. “Will Willis have time to complete the garment? He appears to have much business outside the shop.” The pulse diminished. He knew. He knew her father had not been home for days and days. He wanted his burgundy fabric to be worked by the man he thought had crafted his tunics for decades. He also wanted to know where that man had gone.

So did Lily. She could not indulge in that curiosity right now. She needed this job because she needed her lord’s coin. Supplies for the shop were one thing. Food was another. This week, for the first time in her life, she’d gone to bed hungry, with nothing in the larder, no money to spend, and no goods to barter. “We have over a month until Easter, my lord,” she reassured. “I can start on the tunic in anticipation of my father’s return.”