Today on First Sight Saturday, I welcome Kim McMahill who is sharing her romantic suspense Marked in Mexico. 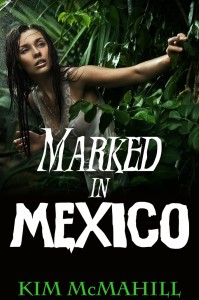 SETUP OF THE BOOK:
An idyllic Caribbean vacation turns deadly when hostages are taken at one of Mexico’s most popular Mayan ruins. The kidnappers believe the abduction will be a simple way to negotiate the release of a colleague from a Texas prison, but the stakes become much higher when they realize one of their hostages is the daughter of a powerful U.S. Senator and another, an ex-Army Ranger who has no intention of playing by the rules. After a daring escape the Senator’s daughter, Jessica, and the ex-Ranger, Jack, must endure a terrifying manhunt and a desperate fight for survival. While trying to stay alive in the unforgiving jungle they forge a bond that will last a lifetime and find love neither wanted, but were unable to avoid.

6 Responses to Marked in Mexico on First Sight Saturday