Every week on First Sight Saturday I welcome a guest author to share a first meeting excerpt. Today Jan Hudson is visiting with her lightly suspenseful contemporary romance Big and Bright which is Book 1 in the Berringer Brothers Trilogy. (Who doesn’t love finding a new series? Not to mention one with a hot cowboy….)

Fun fact about Jan: Jan once kissed Elvis Presley (yep, the real live one) when she and eight friends (mostly college freshmen) piled in a car and drove to one of his early appearances & sat on the front row making lots of noise. They went backstage, met him, and two or three of were nervy enough to kiss him. LOL He was a really, really nice guy. 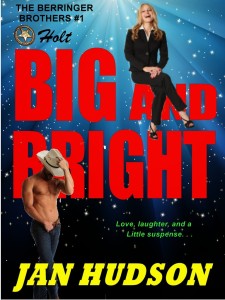 4 Responses to Big and Bright on First Sight Saturday