Each Saturday, I welcome a guest author to share a first meeting between two characters. I suppose Karen McCullough’s is a good choice for the first Saturday in December since the word gift is in the title, though the murder part doesn’t make it entirely festive. Karen shares with us her mystery with romantic elements,  A Gift for Murder.

A fun fact about Karen: “I worked in trade publishing for ten years and attended numerous trade shows. At one of the very first ones I went to, I realized that it would make a great setting for a murder mystery. The gossip and stories I heard about some of the things exhibitors and attendees were doing was astonishing.  Great material for a novelist!” 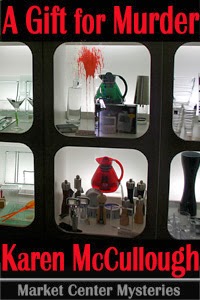 By nine-thirty, blizzards of paper covered my desk, my cell phone hadn’t quit buzzing, and the land-line phone rang continuously. The computer constantly chimed the arrival of new email messages. A strange man stopped at the office door and stood there watching me.
The triple-shot latte was already struggling to keep my sanity in place.
I recognized the number on the cell phone display and reached for it first.
“Heather?” Janelle, the Show Center’s director and my boss, sounded disturbed. Unflappable Janelle sounding disturbed was worse than most people shouting or having hysterics.
“Problem?” I asked, trying not to stare at the stranger, who lingered near the doorway. A quick glance said he was worth a look.
Until Janelle said, “Find Mark and tell him aisles three to five don’t have power. He’s not answering his pager. Then call Truffant Shipping and ask them to fax copies of the manifests for their deliveries to Brent-Cooper. A couple of their boxes are missing. Once you’ve done that, can you get down here? Lots of ruffled feathers over the power. Oh, and Grantwood & Bethel is missing one of their key people. They think he may be lost somewhere in the city. And Sue Savotsky of Trimstates doesn’t like her location—the carpet’s not clean, and the people across the way are playing loud music.”
“Her again?”
“ ’Fraid so. But she likes you, so if you wouldn’t mind—What’s that?” The last two words were directed at someone else. “Gotta go. Need you ASAP.” Janelle ended the call.
I reached for the latte getting cold on a corner of my desk.
Someone else yelled, “Heather!”
Jo startled me so badly I almost splashed coffee on my white silk blouse. That would make a really good impression on the clients down on the showroom floor. Or the hunk in the doorway.
I turned toward her office. “What?”
“I can’t find the latest press accreditations list.”
“I put a copy in your inbox this morning. Did you look there?”
“Yes. It’s not… oh, wait, here it is.”
How did our marketing director manage to get her shoes on the right feet in the morning? I rolled my eyes, momentarily forgetting I wasn’t alone.
A warm, masculine chuckle reminded me. “You must be the person who runs the place.” The voice was deep and rich, sexy as a Milky Way bar—the kind with dark chocolate.
I turned to face the stranger, who’d taken a couple of steps toward my desk. Tall, lean, around thirty, blond hair cut short, light eyes of indeterminate color.
“I’m Heather McNeil, the director’s assistant,” I answered. “I do my part. Can I help you?”
The right side of his mouth curled into the beginnings of a smile. For a moment there was a delightfully predatory gleam in his eye, but then the light went out, as if he’d shut it off. Damn!
“Scott Brandon. I had an appointment to apply for the security officer’s position you’re advertising,” he said.
“You need to see Craig Vincelli, down the hall. He’s the security chief.”
“He wasn’t in his office. Someone directed me up here. There wasn’t anyone at the receptionist’s desk, either.”
Jo came out of her office, shuffling an armload of papers. “Gotta take these down to the press room. Back shortly.” She paused to admire the newcomer, then raced down the hall when she heard the elevator bell ping.
“God knows where Tina is,” I said, as much to myself as to the man standing there. “Craig’s probably out running down the missing boxes. Or the missing executive. Just a minute.” I picked up the phone and dialed Craig’s cell number.
He answered on the third ring, breathless and in a hurry. “Yeah?”
When I explained, he said, “Crap, I forgot. I’ll be there in ten minutes. “Give Brandon the paperwork.”
I said I would and hung up.
“You’ve mislaid boxes and an executive?” Scott Brandon asked. “The boxes I can understand, but aren’t executives kind of hard to lose?”
“Not in D.C. They manage to lose themselves all the time. In traffic, in museums, in the Metro, in the halls of power…”
He frowned. “You’re too young to be so cynical.”
“There’s an age limit? No one told me.”
“Real cynicism takes bitter experience.”
“And you’re so ancient?”
Something flashed in his eyes, something dark and dangerous. “I’ve walked the walk and—”
“Turned the talk into a lecture. Come with me.” I stopped at Tina’s desk to get the application forms and led him to the small conference room. “Sit in here and fill these out. Bring them back to me when you’re done.”
I spent a few minutes on the phone trying to track down Mark, our resident electrician, but he didn’t answer pages or his cell phone. No one had seen him. I swore quietly to myself, then called the shipping company about the boxes. They promised to fax the manifest.
I needed to get down to the show floor but I couldn’t leave Scott Brandon up here alone, so I called a few more people around the building, trying to locate Mark. On a hunch I dialed down to the snack bar and nailed my target. I asked the manager to put him on the line and gave Mark an earful about turning off his pager and cell phone. Then I told him about the power problem. After a couple of insincere apologies, he promised to get right on it. As I was hanging up, Scott Brandon emerged from the conference room.
He brought the forms back to me. I had time for a quick glance at his date of birth before the elevator pinged again and disgorged Craig Vincelli into the lobby.
“Here’s the man you need to see,” I said.

Was that a flash of regret in Brandon’s eyes before he turned to face Vincelli? I hoped so.

You can find A Gift for Murder at the following vendors:

For more information about the Market Center Mysteries go to http://www.marketcentermysteries.com

Karen and I welcome questions and comments, and I hope you stop back next week for a fresh new first meeting excerpt.

3 Responses to A Gift For Murder on First Sight Saturday