Each week I invite a guest author to share a first meeting excerpt on First Sight Saturday. Today I welcome Bethanne Strasser (who also writes at Beth Rhodes) to share a scene from her contemporary romance, For Love or Duty. Beth’s fun fact is one that may not have been so much fun: she has lived in nine states and once travelled to the Philippines. 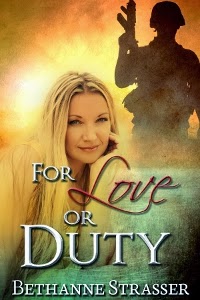 13 Responses to For Love or Duty on First Sight Saturday