Each week a new guest author to share an excerpt of a first meeting. Today on First Sight Saturday, Cynthia Woolf brings us the piece of her historical western romance Redeemed by a Rebel. Cynthia started writing her Destiny in Deadwood series after enjoying the HBO series, “Deadwood,” though she assures me she doesn’t use HBO language in her books! 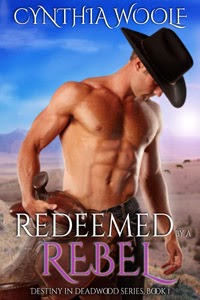 She went back to looking at the new arrivals and supposed she ought to make their acquaintance. Meeting them was the right and proper thing to do and her Grandma Bess would want her to do it. Besides, they’d see her nearly every day riding by on her way to and from Deadwood to fetch Billy.
Pushing away from the tree she was hiding behind, Becky worked her way down the path to her and Billy’s claim. Then she saddled Buster, her mule, and started toward Deadwood. She needed to go to Sutter’s and pick up supplies anyway.
Becky admired Lily Sutter. She hadn’t closed down for mourning when her brother died. Said he was never home anyway, since he’d gotten gold fever, and she had a daughter to provide for.
That was the other thing about Lily. She had a daughter out of wedlock and wasn’t ashamed of it. She and her brother could have lied about it but she’d said Gemma was the best thing that ever happened to her and she’d never let her think that Lily was ashamed of her.
They held the funeral after regular closing time and there was absolutely no disruption of the normal course of things. She treated her brother’s death like it was just another day and Becky supposed it was.
She rode into the newcomer’s camp and was immediately greeted by the boy. He had dark brown hair that was a little overly long under his black Stetson. His clothes, a little baggy, were just like hers.
“Hello. Who are you?” he asked eagerly
“Hi there. I’m Becky Finnegan. My pa and I have the claim next to yours,” she pointed back the way she’d come.
As Becky slid from Buster, the men came over to greet her, followed by the little black haired girl.
“I’m David Anderson and that’s my pa there with my sister.”
Becky looked over at the tall man striding quickly toward her, the little girl running in his wake. The other two men followed at an easier pace.
“Hello, I’m Liam Anderson,” he said, extending his hand toward her. He was a looker. They all were. And they were all tall. She was tall, for a girl, but Liam was easily six foot four, a good eight inches taller than her, with brown hair and gray eyes that were old, older than the rest of him. They told her he’d been through a lot. But his sharp features stretched into a friendly smile.
“Becky Finnegan,” she gave him a firm handshake.
“Miss Finnegan, let me introduce my family. You’ve already met my son, David. This is my daughter, Hannah and my brothers, Zachariah and Jacob.”
The dark haired one stepped forward. “Zach. No one except Liam uses Zachariah.”
She nodded and accepted his outstretched hand. “Pleased to meet you, Zach.”   This one would have all the women in camp swooning with his coal black hair and piercing blue eyes. The little girl looked just like him. If she hadn’t been told otherwise she would have though him the girls father.
“And this is Jacob,” said Liam, introducing the last brother. He was also tall, about six feet she guessed, with dark blond hair and brown eyes that twinkled with laughter. He had a strong, square jaw and friendly smile.
“Jake,” he said, eyeing his brother as he shook her hand, “not Jacob.”
His voice, deep as Grandma Bess’s well, washed over her. This man was dangerous to her peace of mind.
“Becky,” she said, shaking his hand. She went still. When they touched, she filled with heat. Not just the warmth from his hand, but one that went much deeper. Warmth that seemed to touch her soul.
Her green eyed gaze flew to his and saw that he was as affected as she was. She snatched her hand from his grasp, looked down and rubbed it. She didn’t know what she expected to see. Maybe that her fingers and palm were on fire because they sure burned.
“Becky,” he repeated, his voice like satin on her jangled nerves.
END OF EXCERPT
Here are some links where you can find Redeemed by a Rebel.
Amazon – http://amzn.com/B00I1GZAU0
Barnes & Noble – http://tinyurl.com/klf5546
Kobo – http://store.kobobooks.com/en-US/ebook/redeemed-by-a-rebel
If you’d like to keep in touch with Cynthia, stop by her website.
Website –  www.cynthiawoolf.com
Cynthia and I welcome any questions or comments.  Don’t forget to stop by for a new author each week on First Sight Saturday.
000000
← Chapter 5 – Becoming Mrs. Thornton
Chapter 6 – Becoming Mrs. Thornton →

11 Responses to Redeemed by a Rebel on First Sight Saturday