Each week I welcome a guest author to share a first meeting excerpt. Today I’m joined by fellow Love Historicals author Adrienne deWolfe with her historical western romance, Scoundrel for Hire, which Adrienne describes as a drawing room comedy. Scoundrel for Hire is book 1 in the Velvet Lies series.

I asked Adrienne for one fun fact, and she gave me five about herself and her book. 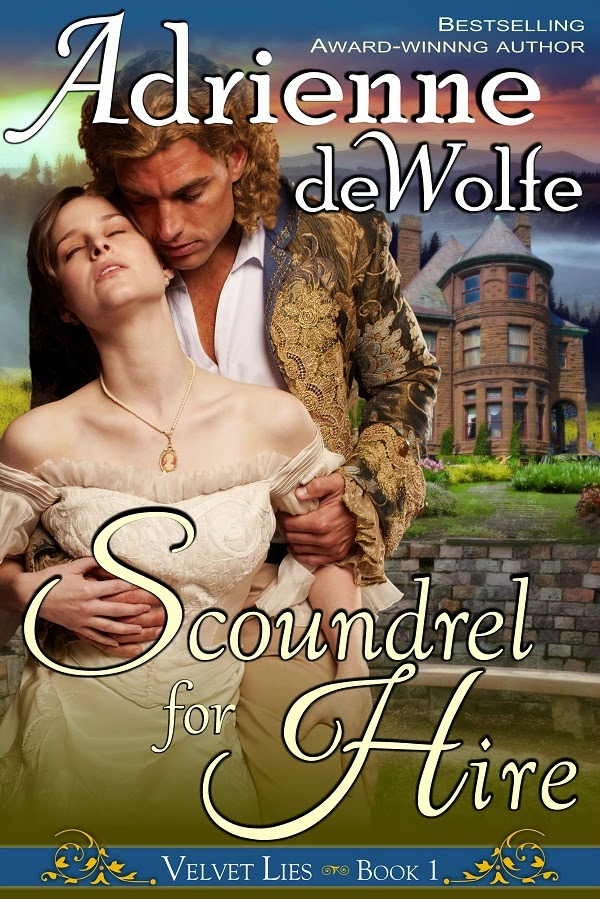 1) Rafe is Adrienne’s first rogue hero – and one of her funniest.
2) Adrienne’s all-time favorite historical novel is THE SCARLET PIMPERNEL. In fact, she spoofed Percy Blakeney from PIMPERNEL when she created Rafe’s alter-ego, “Lord Chumley.”
3) Adrienne’s favorite novel line from SCOUNDREL:  “Any man that full of himself has got to be constipated.” ~ Rafe Jones
4) Adrienne set out to write a farce, so she gave Rafe an orphaned baby otter as a pet. The otter’s mother never got around to teaching her how to swim. So guess who has to do it – in the heroine’s bathtub?
5) Adrienne is donating a portion of her royalties from SCOUNDREL and the rest of the Velvet Lies Series to urban reforestation efforts.
SETUP OF SCENE:
Raphael Jones is a Kentucky-born scoundrel, who has never played by the rules. When Colorado mining heiress, Silver Nichols, hires him to stop her precious daddy from marrying a golddigger, Rafe sets out to seduce Silver and win her fortune.  But beneath Silver’s cool veneer, Rafe encounters a sweet vulnerability and an aching secret that threatens to send his whole world up in smoke. Now the wily scoundrel must choose: walk away or wager the one thing he can’t afford to lose—his heart.
EXCERPT
A gentle “Eh-hem” and the captivating whiff of lavender distracted Rafe from his worries about Fred’s mining hoax. To his surprise, he found Silver Nichols standing companionably by his side. The corner of her mouth curved in a half-smile.
“I suppose,” she murmured, “the gentleman with the, er, diamonds is a friend of yours?”
The velvety timbre of her voice claimed his attention more thoroughly than a clap of thunder. He hadn’t expected a mining heiress to sound like she looked: rich. Sinfully rich. He was entertaining a delicious vision of hot fudge and cherries, when the full implication of her words slammed into his brain.
“I beg your pardon?”
“The man in the top hat. I daresay he’s your accomplice?”
Somehow, Rafe managed not to choke on his tongue. “My dear young woman, I fail to understand—”
“I rather doubt that,” she cut in smoothly. “You look much too intelligent. Canny, in fact. However, I am willing to believe that you are naive about the swift justice that mining juries dole out.” She turned once more to watch Fred’s con, playing out so flawlessly before them. “So let me give you a tip. The geologist you’re impersonating is about two-thirds your height, twice your weight, and his pate is just shy of bald.”
Rafe entertained a vision of throttling Fred, who had assured him that Bartholomew Markham, the renowned Pennsylvania geologist, hadn’t set foot in a western mining town since the war.
However, Rafe hadn’t spent the last fifteen years as a professional flimflam artist to let some cheeky millionaire’s daughter get the upper hand now. He eyed Silver with a nerve that he’d honed at fourteen, bluffing his way through Shakespeare’s Juliet, while all-male audiences had pelted him with tomatoes.
“Good heavens.” He chuckled. “Uncle Bartie and I look nothing alike. Now I’m beginning to understand your confusion, Miss Nichols.”
He could feel her appraising gaze poring over him with the same attention that a bookkeeper might use on accounts. He couldn’t help but lament the irony. Here he was, standing thigh to thigh with an unmarried heiress, and he was insisting that he was some middle-aged greenhorn with a paunch!
“So you claim to be Mr. Markham’s nephew,” she said slowly, an unmistakable lilt in her voice. “You must be from Philadelphia, then.”
“The Cradle of Liberty itself.”
“How delightful,” she drawled. “I’m from Philadelphia, too.”
“Yes, well, I, er, was merely born there,” he recovered as gracefully as he could. Damn her anyway. Was she really from Philadelphia?
Unable to take that chance, he hastened to add, “I spent most of my youth in…” Hesitating, he cast her a sideways glance. Where would a lawless sport be safe from female busy bodies? “…Abilene. And later, in Dodge City.”
“Dodge City? Oh my.” Her eyes twinkled like twin stars as they laughed up at him. “A geologist in a cowtown. I can just imagine what you must have dug up.”
He glowered at her.
“So tell me Mr. Kansas geologist,” she purred, “in what sort of rock formation might one find bituminous coal?”
Their eyes locked.
Rafe’s heart sank. He didn’t have the vaguest idea.
END OF EXCERPT
You can find Adrienne’s books at these places
Velvet Lies Series
http://ebookdiscovery.com.p8.hostingprod.com/AdrienneDeWolfe.html
Wild Texas Nights Series
http://ebookdiscovery.com.p8.hostingprod.com/AdrienneDeWolfe.html
The Secrets to Getting Your Romance Novel Published (Series)
http://writingnovelsthatsell.com/the-secrets-to-getting-your-romance-published/
You can find Adrienne at these places:
Facebook http://facebook.com/Writing.Novels
Twitter (Novel Writing Tips & News) http://twitter.com/AdriennedeWolfe
Twitter (Gratitude & Positive Thinking) http://Twitter.com/SolDawn
Twitter (Fantasy Fiction) http://Twitter.com/SolMage
Triberr  http://Triberr.com/AdriennedeWolfe
Adrienne and I welcome any  questions and comments. Come back each Saturday for a new first meeting excerpt from a visiting author.
000000
← Chapter 13 – Becoming Mrs. Thornton #sequel #northandsouth
Chapter 14 – Becoming Mrs. Thornton #northandsouth #sequel #MIL →

8 Responses to Scoundrel for Hire on First Sight Saturday