Welcome to the inaugural First Sight Saturday on my new website! Laura Strickland had no idea she’d be leading this charge with her historical romance, Champion of Sherwood: the Guardians of Sherwood Trilogy Book Two.

A fun fact from Laura: My interest in writing about Sherwood Forest and Robin Hood’s descendants began when my daughter was small and we used to play “Robin Hood Barbies”.  The living room and the space under the dining table became Sherwood Forest and Nottingham Castle, and I sewed period costumes for all her dolls!

That’s a wonderful memory, Laura. My grandmother sewed boxes and boxes of Barbie clothes for my sisters’ and my dolls. I spent hours bringing a happy ending to my Cheryl Tiegs Barbie. Little did I know where those imaginings would lead. 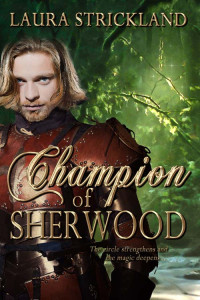 Anyway, today Laura shares a first meeting excerpt. Here is the setup of the scene.

Gareth de Vavasour, nephew of the Sheriff of Nottingham, has been captured by outlaws in Sherwood Forest. The first time he meets the heroine, Linnet—a Saxon healer and the granddaughter of Robin Hood— she has been sent to tend his wounds so he may be traded for ransom.

“This will hurt,” the woman told Gareth, and he caught his breath. Each time she had told him so, it had proved true and he believed her now. He braced himself for more pain and told himself he was nowhere near the end of his endurance. Was he not a proven knight? Had he not endured broken bones before, been tossed in the lists and taken many a hard fall?

Aye, but then he had only needed to get to his feet and weather his injuries. He had not been surrounded by a pack of carrion ravens.

True, he found himself, now, alone inside a dim hut with this woman. But he knew the scavengers still lurked outside – he could hear at least two men just beyond the door, no doubt guarding it, and talking to one another. The other noise outside had not abated. Folk seemed excited by the proposed spectacle of his death.

But would they provide him this care only to kill him? The woman – Linnet, he had heard someone call her – had skill in her hands, quick and gentle. Already she had set his broken arm and now worked over the ugly wound at his shoulder, which brought her very close to him, indeed. She poured some vile smelling liquid into the wound and he caught his breath sharply.

She had not lied: it hurt.

“That will help keep the poisoning from setting in,” she said with brief asperity.

“Does it matter? They wish only to kill me, that crowd out there. They will never return me, even should a ransom be paid.” He stole another look into her face. Nothing like he had imagined a Saxon peasant, she was entirely surprising. Aye, some of their women were bonny and reputedly lustful, with bountiful yellow locks and still more bountiful bosoms. None of that fit this woman at all.

Her face floated above him, a pure, almost perfect oval. Most of her dark brown hair lay gathered under a head covering but her brows soared like two dark wings over eyes so beautiful and unusual he scarcely dared look into them. Fringed by the longest lashes he had ever seen, they appeared liquid dark, bottomless and wild. In truth, she felt wild withal, despite her neat clothing, a foreign creature not meant for this place. Yet her hands remained kind and calm, her face serene – an intriguing contrast.

“They will not kill you,” she said softly. “Though, it will go better with you if you tell them your name so they can send word to Nottingham.”

A slight frown marred her smooth brow. “A word of advice – you will tell them, sooner or later. Spare yourself their persuasion.”

“Torture, is it? As might be expected of cowards.”

She withdrew slightly. “If you think those people out there cowards, you know nothing about them.” In defiance of her hard words, her fingers slid over his skin, applying some sort of unguent before pressing a cloth bandage in place.

To Gareth’s surprise, he felt a prick of arousal. This was not the time, the place, nor the woman – beautiful as she might be.

Someone – a man – thrust his head inside the open door of the hut. “All right, Linnet?”

Briskly now, her hands moved to the rent at his thigh. Once more he caught his breath, though not against pain this time.

The wound there, he knew, was a grave one – had it landed a bit further to the left, he might well never lay a woman again. She tore the cloth further asunder, only to find she had exposed more than the wound. She tipped back on her heels and a lovely, deep color swept her face.

Her eyes met Gareth’s in a look so deep and dark it pierced him to his soul. A wave of feeling rose between them, bright and intense. So powerful was it, for an instant Gareth almost supposed he could sense her thoughts, every whit as entangled as his own.

“Aye,” he said in a voice that sounded strangled. And just as well.

END OF EXCERPT
It’s almost painful to leave poor Gareth like this without knowing what will happen. In case you are feeling the same way, visit one of the links below.
Amazon      The Wild Rose Press
If you’d like to keep in touch with Laura Strickland, visit her website.
Thank you for visiting today, Laura. I’m sure we both welcome any comments or questions. Return ever Saturday for a fresh first meeting excerpt on First Sight Saturday.
000000
← Home Fires on First Sight Saturday
Digital Book Day #freebooks #digitalbookday →