Each week on First Sight Saturday, I welcome an author to share a first meeting excerpt. Today Debra Clopton brings us her sweet contemporary romance, Her Mule Hollow Cowboy, first book in a series. Debra writes cowboys, but is also a NASCAR fan. Her two dream jobs were being an author or being a race car driver. I’m not sure how the driving is going, but it looks like she’s taking a successful run at the writing! 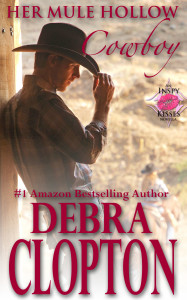 Setup of the scene: Cowgirl and new part owner in the magnificent New Horizon Ranch in Mule Hollow, Texas, is trying to prove to herself that she is worthy of the amazing gift she’s been given as one of the partners. She understands why her partners were willed ownership–they are hard working young cowboys that had been working at the ranch for a while, but she’s only been there 2 years and came from a background of being an orphan abandoned on the steps of the Post Office when she was a baby. This gift is unbelievable to her and she is determined to live up to the faith and opportunity her ex-boss has given her. But she’s now having trouble loading a stubborn bull-Buford-and a hero is about to come to her rescue…

For the first time in her life she’d been given a shot at something big—it didn’t matter that she didn’t deserve it—she was going to do her fair share to see that her former boss never looked down from heaven and regretted the faith he’d shown in giving her this opportunity. She’d already decided that any dream she’d had prior to the reading of that will was going on hold…there would be plenty of time for them later.

Buford snorted sending Maddie instantly on alert. He never did anything he didn’t want to do and Maddie knew the ornery bull could make mincemeat out of her if he chose.

He chose—one powerful kick sent the gate slamming into Maddie. A scream ripped from her as the bone crunching impact knocked her off her feet. Flying backwards like a rag doll she slammed into the pipe fence. The hit was immediately followed by the heavy, steel gate. Pain exploded everywhere, glazing everything as it seared through her, dazing her.

Got to stay on your feet.

The gate swung away from her and instinct had Maddie clawing, grasping for its rungs.

Stay off the ground or be trampled.

Bufford kicked the gate again, this time, all Maddie’s breath whooshed from her, her lungs locked up—the impact so excruciating she hit the ground instantly.

She landed face first in the dirt and her mouth filled with foul tasting grit. Fighting for breath she couldn’t help herself, she was helpless. A flashback to her childhood crowded her mind.

Wheezing, she willed herself to move. To breathe.

But, as she’d been unable to help herself all those years ago when she was a sickly abandoned baby, she was helpless now.

Suddenly, boots attached to denim-clad legs thudded to the ground between her and Buford.

“Yah,” yelled the cowboy, planting himself directly in the line of danger as the bull bolted from the trailer like a runaway tank.

Where the cowboy had come from, Maddie didn’t know, but from her position he looked like a gift dropped straight from heaven.

“Go on, now,” he yelled then stomped and waved his arms—held his ground—Buford cut sharply to the right, away from Maddie.

Though her lungs still burned with the need for air, relief surged through her watching the cowboy herd the bull away from her and into the holding pen. Within moments he returned and dropped to his knees beside her.

“Here you go,” he drawled, easing her to her side. “Try to relax. The breathing will get easier. Come on, now go easy.”

She struggled to relax. He was right, after a few more inhales the breaths did come easier, though there was a sharp edge to each breath if she inhaled too deeply. “Thank. You,” she managed, giving him a weak smile.

He didn’t smile back, concern etched his rugged, handsome face. “Glad I was here. How are you feeling now?”

Maddie’s pulse fluttered, she was mesmerized by his penetrating indigo eyes. Flustered, she yanked her gaze off her gorgeous rescuer and rubbed her ribs, wincing. “Like I’ve been kicked by a two-thousand-pound bull.”

His soft chuckle sank over her like warm honey.

“You may have broken some ribs,” he said, kindly then demanded. “What were you doing out here by yourself in the first place?”

“Loading a bull,” she retorted, humiliated by the entire pitiful ordeal and the fact he’d witnessed it. This cowboy probably thought she was some greenhorn who didn’t know beans about bulls or cattle.

Needing more control she struggled to sit up without groaning. Honestly, she was feeling better—but who wouldn’t? Her cowboy rescuer would make any woman forget she’d been almost stomped to a pulp by a bull—even her.

And that those eyes of his were lethal weapons.

The guy was gorgeous—even oxygen deprived and in pain as she’d been she’d realized that immediately. Touchable dark hair curled from beneath his straw hat and enhanced his firm, chiseled jaw. His high cheekbones underlined those penetrating, strength filled, blue eyes.

Maddie got hung-up on that smile—suddenly thinking about long, slow kisses… There was an understandable delay in her fogged brain relaying the message that he knew her name.

And she’d never met him. She knew because she would have remembered him if she’d met him anytime in her entire life. And yet, she realized there was something slightly familiar about him.

“Have we met?” she asked, as dawning hit her dazed brain and she saw the resemblance. “Wait, you’re Cliff Masterson, Rafe’s twin brother. The bull rider.” Rafe was one of her ranch partners and a good friend.

“Some nights. Some nights I eat more dirt than you just did.” His expression was a mixture of humor and ire—one that made him look more like his brother than he had so far. Rafe had said they weren’t identical by a long shot. He’d been right.

They were both dark haired, good looking and with similar face shapes and body builds, but other than the occasional similarity of expressions a person would never mistake them for twins.

She relaxed, some. “Rafe said you were coming but I thought it wasn’t until next week.”

“How about we get you up to the house?” he asked and before she could answer or even nod he’d moved behind her and in an instant his strong arms slipped around her, gently lifting her up.

Momentarily all pain disappeared. His purely masculine scent wrapped around her, drawing her like a hummingbird to sugar water. She fought the overwhelming urge to lean into him.

Ha! Like she needed any encouragement. Even the sharp pains shooting from her ribs overrode the initial shock of his touch, Maddie’s awareness of the man stunned her.

She didn’t let men get too close. Held them at bay and even though she got lonely and hoped one day she’d have the guts to change that…this kind of reaction had never been a problem.

She chalked it up to the fault of the ordeal she’d just gone through.

It didn’t matter anyway. Not right now. Finding the guts to knock down her emotional barriers. To risk her heart for her dream of falling in love and having the family she longed for—that dream was on hold for now.

She had other priorities. Like not flubbing up any more.  To prove to herself that she was deserving of this gift.

Needing a hero to ride to her rescue was not the way to do it.

Gotta love a cowboy savior! I know you’ll want to read more. You can find Her Mule Hollow Cowboy at the following sites.

Also, don’t be shy about meeting up with Debra Clopton at http://debraclopton.com/ where you can sign up for her newsletter for contests and news.

Debra and I welcome your comments and questions. Come back each week for a first meeting excerpt from a different guest author.