Each week I welcome a guest author to share an excerpt of a first meeting. Today on First Sight Saturday, Ava Conway shares a scene from Hollow, her New Adult contemporary romance.

Well, Ava, that is in direct contrast with me since I’ve never developed a taste for it, though I watched a season or two of American Idol. Now, on to your story!

Setup of scene:  Lucy has been sent to a private mental hospital called Newton Heights to deal with her depression and low self-esteem. There, during one of her therapy sessions, she meets a mysterious boy named Jayden. She is drawn to him, but he also puzzles her…. 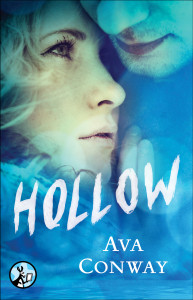 The doctor’s voice faded into the background as my gaze rested on a tall man sitting on the other side of the circle. He stared at me rather intently, as if I was some puzzle he wanted to figure out. His round face was dotted with stubble that matched the caramel-colored layers on his head. I had seen him around the floor earlier this week, wearing the same clothes and joking with one of the orderlies. He had the same arrogant confidence I remembered, the same knowing smile. The plain, navy polo he wore was a tad too small and pulled tight against his lean chest. Some sort of preppy emblem stood out on the right side of the shirt, but I couldn’t make out what it stood for from so far away. Broad shoulders rolled into a ripped chest and flat abs. He draped his arm over the empty chair next to him, showing off his muscular arms. Traces of dark ink peeked out from underneath the sleeve of his shirt and stood out against his otherwise pale skin.

A tattoo. I fixed my gaze on the dark design and wondered what the hell it could be. I had seen many tattoos at college, but they were all worn by leather-clad bad asses, not polo-wearers. The ink seemed to war with his shirt and khakis, making him a curious enigma. I could clearly see this guy modeling for an LL Bean catalog one afternoon, and then be featured in some biker magazine the next.

He arched his perfectly formed brow and stared at me with the most beautiful and haunting emerald eyes I had ever seen. They seemed to slip right past the wall I had built around myself and see straight into my soul. He held my gaze and twisted his lips into a knowing smile. I suddenly felt an odd connection to him, like we were both the only sane people in the entire establishment. It was both comforting and terrifying. He had an honest-looking face, like he was the type of person I could trust, which only made me more unnerved.

I tore my gaze away from the stranger and looked up at the doctor through my hair.

“I asked if you had anything you’d want to share with the class…” The doctor flashed me another brilliant smile, but her voice sounded strained.

I shook my head and angled my body in the chair so I wouldn’t have to look at anyone else—especially him. The man was entirely too sexy for his own good…

END OF EXCERPT
Hmm, group therapy, not exactly the first place you expect to make a connection with someone, yet attraction can happen in the most inconvenient places.
To find out how Ava brings the two sane people in the room together and get your copy of Hollow, select from your vendor of choice below!

To learn more about Ava and her releases, please visit http://www.AvaConway.com

Want to know the minute Ava’s next release drops? Then sign up for her newsletter here: http://eepurl.com/GkIoz

Ava, thank you for visiting today on First Sight Saturday. I’m sure you join me in welcoming questions and comments. Visitors, stop by every week for my own brand of therapy: discovering new authors through their first meeting excerpts!