Normally I host a guest on First Sight Saturday, but today is release day (!) for my New Adult contemporary romance, Eruption: Yellowblown™ Book One, so I thought I’d take the spotlight for myself this week to give you a nice, long first meeting excerpt. I always ask my visiting authors to share a fun fact, so here’s mine: I was the only geology major in my graduating class. 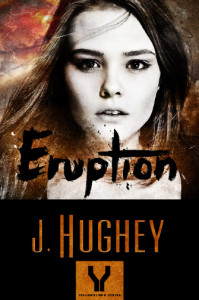 I glanced around the room again, in the midst of a minor panic attack and, seeing my bike, remembered the first time I’d ever talked to Boone, for real. Last September, on a gorgeous Saturday evening, I’d taken my old bike—a heavy blue Neanderthal compared to my Giant—for a quick spin to escape the freshman roommate from hell who’d gotten high, or drunk, or both—in the middle of the afternoon, no less—and drained her cell phone battery with sobs to her hometown boyfriend. When I tried to be sympathetic, her wordless snarl told me she didn’t want my support, though I’d tattled to our RA on my way down the hall. I really didn’t want to return from biking to find my cray cray roomie dead from an overdose.

After my responsible escape, I’d ridden four or five miles out of town then looped back on the country roads. At the first stoplight, a biker came toward me on the perpendicular street. He nodded at me and looked away then looked back at about the same time I recognized him. Boone freakin’ Ramer. The unexpectedness both jazzed and horrified me. Hotness, all to myself, yes, but he was seeing me in a helmet, sports sunglasses and a water bladder backpack.

He wore sunglasses, too. The reflective orange lenses hid his eyes, but not his frown. “Aren’t you a freshman at Western Case?” he asked. His voice was nice, not crazy deep but definitely masculine, and he spoke with a slow cadence, in no hurry at all.

“What’d you think of the game?”

“What game?” I scooted my bike farther onto the shoulder of the road as a car cruised past.

“The football game. Today. At home.”

“I don’t follow sports much. Was it good?” Those maddening mirrored glasses hid everything. His extended silence couldn’t be a positive sign.

“Are you lost?” he finally asked.

His self-deprecating smile thinned his lips but showed no teeth. “No, sorry, most students only ride far enough to find beer.” He moved his head in a way that suggested he was checking out my gear. “I should’ve noticed you weren’t dressed for a grocery run.”

“I only did about ten miles,” I said with a shrug.

“Twice what I can do on these hills.” He grimaced.

I slid my sunglasses off my sweaty nose. I didn’t like not seeing his eyes and hoped he’d show me his if I showed him mine. I used the maneuver as an excuse to check out the rest of him. His biking shorts were loose, like gym shorts, accentuating awesome, tight calves. The top half of him didn’t disappoint, either, with the thin fabric of his shirt plastered over his pecs. He was respectably muscled, not over-juiced like Bodacious.

“Yep.” He finally removed his sunglasses to wipe his forearm over his ruddy face.

“What happened?” I indicated his leg with the tip of my chin.

His quick glance registered surprise before he gave the same odd little smile. “Oh. I was a quarterback for the football team. Took a low hit at the end of last season.”

I squinted at his leg. “Wow, those scars are tiny.”

He prodded at a shiny pink dot on his hairy skin. “The doctors in Pittsburgh are some of the best.” He sounded tired, or sort of downcast.

In an unusual moment of insight, I said, “Was today the first game since?”

He looked down the street, away from me, then at the road cinders at our feet. “This is the first fall I haven’t played ball since I was six.”

“Wow. I can’t think of anything other than, you know, the basics like breathing I’ve been doing for that long.”

“They did. I didn’t.” He picked up the front of his bike by the handlebars then set it back down. “When the mom who drove you forty miles round trip for midget practices and the dad who wrecked his shoulder passing the ball back to you both say it’s time to quit….”

He smiled a little more cheerfully and I smiled back, glad because he’d been cruising toward miserable. Just the image I wanted to create—here’s the sports ignoramus who can totally bum you out in thirty seconds flat.

“They let it up to me in the end. I made the right decision. It’s not like I have a chance to go pro. I’ll be able to walk when I’m forty, maybe throw the ball with my own kid.” A shrug bunched the muscles at his shoulders. Another shadow of doubt passed over his face.

“The bike’ll be good for you.” Again with the brilliance, as if some millionaire orthopedist hadn’t already told him about biking. Duh.

“I can go farther in Nebraska. Fewer hills,” he said. He reached for the water bottle attached to the down tube of his bike, and I could almost see him shaking off the blues. “Where are you from?” His green eyes bored into me with unanticipated curiosity.

“Why do you ride?” he asked after he’d finished taking a deep drink from the Copperheads Football bottle.

“Um, mostly ’cuz it feels good. I mean, it helps me to clear my head.” It feels good? Really, did I say that out loud?

“Endorphins,” he said. “Though I could do without the bugs smacking me in the face.” He tucked the bottle in the cage and pushed his sunglasses back on. “Wanna head back?”

“Sure.” I slid my own glasses on and clipped one foot into a pedal.

We stood on the corner, ready to launch, each waiting for the other to lead.

“You go ahead,” he finally said with a chuckle.

“No.” He grinned. “My mama taught me ladies go first.”

I rolled my eyes, checked traffic and pushed off, thanking God my other biking shoe clicked neatly into its bracket.

“Clips,” he said from over my left shoulder. “You’re brave.”

“Power on the upstroke and downstroke,” I said.

“Or instant death the first time I tried to stop.”

I laughed. “I practiced in my front yard for awhile. If I can do it, anyone can.” I shifted into a lower gear for the gentle climb. The real bitch of a hill would come at the end.

I glanced over my shoulder at him. “Have it your way.”

He panted in even, deliberate puffs by the time we reached the edge of campus, but he hadn’t given up. He’d stayed on my back wheel. I did a cool down loop on the local streets before guiding us to the dorm.

I stepped off my bike and reluctantly removed my helmet. My stubby ponytail was mostly intact, though much of the front section of my hair slipped from the skinny hairband. I did my best to tuck the errant strands behind my ears.

He arranged his own gear then looked at me with the green stare again, more intense than before. “I’m sorry, I don’t remember your name.”

“I’m sure we freshman all look alike.” I extended my hand. “Violet Perch.”

“Boone Ramer.” He took my hand and, though our palms were hot and sweaty, he continued to hold it, lighting a fuse of attraction that sparked up my wrist and past my elbow. “Violet. Unusual name. I’ll remember it now.”

“Yeah, it’s kind of a curse,” I said as the heat passed my shoulder to go straight to my skort.

“I didn’t mean unusual bad. It’s nice. Feminine.” He released my hand while his eyes touched me, sliding down my pink jersey and along legs I knew weren’t particularly long but had hints of muscle definition.

I knew what I was. In our world of breast enhancements and thigh gaps, I didn’t have the right dimensions to attract a guy in Boone’s league, especially with my sports bra smashing my itty bitty titties down to nothing. Helmet hair, sweat stained armpits, padded bottoms, and black sturdy shoes completed the non-seductive, flat-chested ensemble. I was all in.

His face sharpened in a way that suggested he might like what he saw. My nostrils flared in immediate, misguided response. God, he was magnetic.

“You’re in good shape,” he said appreciatively. “I bonked on the last hill but you pulled me up.” He waggled his brows at me. “Couldn’t let you make me look bad.”

My face flushed beyond exercise-induced red. “You did good.” We wheeled our bikes toward the door and I’d almost worked up the courage to ask if he’d like to ride together again when a trilling voice called his name.

Twyla Blakelock, who’d ignored me at a rush party last week, bounced up to press her glossy lips against his mouth. Her nose wrinkled. “Ewww, you’re all sweaty,” she said.

What kind of moron touches him and says Ewww, I thought. You’re ewww, Twyla.

“Hey, I’ll see you later,” I said out loud, eternally grateful for the guy who came out the door at the right time to hold it for me.

Only 99 cents at Amazon until September 27.  http://www.amazon.com/dp/B00MRHAIRO