This week on First Sight Saturday, Heather Boyd shares a not-quite-first meeting, when a bride who’s been missing ten years shows up at the theater, of all places. Keepsake is a historical romance and Book Five in the Distinguished Rogues Series. Heather has eight rules she lives by, and very near the top is “Choose a dentist that isn’t stingy with painkillers.” Amen to that!

SETUP OF THE SCENE The Marquess of Taverham married young and fast with his eye firmly on his bride’s dowry as the means to repair the family fortunes for the next generation. Too late he discovered his new wife wasn’t going to make achieving all of his dreams that easy. What happens when the runaway bride comes back? 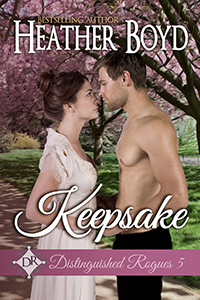 The lady had the audacity to dip Kit a low curtsy and flutter her fan as if she were overcome. A curtsy of all things! She stepped farther into the light and the crowd in the theater gasped loudly, the theatergoers beginning to mutter to each other.

The last time he’d seen Miranda, she’d just spoken her vows after a long night of making love to him. That had been ten years ago. Since then, little had changed of her looks except she had become even more beautiful. She was still as elegant as his memory remembered, still as desirable as his fantasies supplied. His eyes lowered slightly from her startlingly direct gaze, skimming along her flawless skin and dipping into the cleavage her scandalously low-cut gown revealed.

He still wanted everything he saw.

“Darling,” she replied in a clear, strong voice that must have carried far in the unusually hushed theatre as she rose. Her gaze raked him from the top of his head to the tips of his boots with a bold, proprietary eye. “You’re looking well. The new fashions agree with you. You look very fine in blue, but I don’t suppose I’m the first to flatter you with that fact tonight, am I? Your good friend there was just complimenting you on your boundless generosity.”

He stared at the woman he’d married a decade before. Same dark hair curling around her ears and nape, same almond-shaped gray eyes that he could lose himself in. Her cheeks were flushed with hot color and her breath was quick, forcing her breasts to rise and fall seductively. However, her smile wasn’t the one he remembered from before their marriage, though that might stem from finding him attending the theatre with a pretty widow on his arm and secret plans in his mind to marry again.

Yet the fact that he was in such a position was entirely her doing. He was not in the wrong. He had finally convinced himself that Miranda must be dead and had made new plans for his life beginning tonight. He folded his arms across his chest and refused to feel guilty. “Where the devil have you been?”

Emily stood too and laid a restraining hand on his arm. “Is this the best place for this discussion, Kit?”

He nodded decisively. Miranda might still hold a certain power over his body, but he wanted everyone to know that it was not he who had driven her away. He had chosen his wife poorly ten years ago, and he would not be that unguarded, reckless man ever again. He’d paid a high price for her abandonment. Some whispered he’d murdered her for her dowry, though he’d never been outright accused of any crime.

He stared Miranda down. He would not say another word until she answered him.

“Where I was wanted.” Miranda’s eyebrow quirked upward innocently, and when she glanced at his companion, her smile was full of pity. “I am sure you are overjoyed to be witness to our happy reunion after so many years apart. I regret spoiling your first season out of mourning with my return, Lady Brighthurst, but you still cannot have him.”

As the crowd’s mutterings rose higher, Emily stepped around him to advance on Miranda. “You turned your back on a great man.”

“I’m sure you’ve been a sincere comfort to him over the years.” Miranda smirked as she drew back. “And if he’s as attached to you as clearly as you are to him, then you may continue in that vein and skulk about together in private as much as you like. But remember, you’ll never be his marchioness now unless he divorces me or kills me.”

Kit scowled at Miranda’s flippant remarks. Divorce was abhorrent to him, and while her disappearance might have angered him, even worried him, he’d never once wished her dead. He’d had enough subtle accusations of that nature to find no amusement in it.

He slipped around Emily to grasp Miranda’s arm, more to prove her not a figment of his imagination than to pull her close. One touch, however, and that same reckless attraction stirred his heart as it had when he’d first met her, as if her disappearance from his life and their estrangement had never happened. He had the unfathomable urge to pull her into his arms and kiss her right there and then before everyone.

Hmmm, what has brought Miranda home, and how much of a marchioness is she prepared to be? If you want to find out the answer to that question, get your copy of Keepsake at Amazon while it is still a 99-cent bargain!

MORE ABOUT THE AUTHOR

Bestselling historical author Heather Boyd believes every character she creates deserves their own happily-ever-after, no matter how much trouble she puts them through. With that goal in mind, she writes sizzling regency romance stories that skirt the boundaries of propriety to keep readers enthralled until the wee hours of the morning. Heather has published over twenty novels and shorter works. Catch her latest news at www.heather-boyd.com. She lives north of Sydney, Australia, and does her best to wrangle her testosterone-fuelled family (including cat Morpheus) into submission. (Heather’s website has been enjoying a recent remodel, so if you can’t get on this instant, try again later today!)

You can connect with Heather directly about Keepsake at its special page on her website.

Heather and I welcome questions and comments. Come back every Saturday for a new first meeting excerpt from a fresh new author.