Today on First Sight Saturday, Mara Jacobs shares a first meeting excerpt from her New Adult contemporary romance In Too Deep, the first book in the Freshman Roommates Trilogy. Mara’s fun fact is that she is a Yooper, from the UPper peninsula of Michigan.

Lily is a college freshman giving swimming lessons to kids when she sees a very handsome guy watching in the stands. She’s so unsettled by his good looks and his focus on her that she even lets one of her students, Andy, slip underwater for a second. 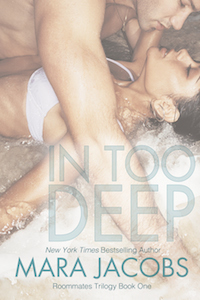 “There he is,” Andy said, pointing down the hall.

My mind was barely processing the “he” instead of “she” when it went into free fall as I watched the guy in the Bribury polo move down the hall toward us, his eyes on Andy.

And then they turned to me.

He was even more gorgeous up close, and as he moved closer still, I felt that hitch again—like I’d gone underwater without first holding my breath.

“That’s my brother, Lucas. He’s picking me up today, because my mom…” Andy was saying. I got the vitals: Lucas—brother. Andy might have said more, but by then the guy—Lucas—had reached us.

“You looked great out there, A. Really comfortable in the water. How’d it feel?”

Better? Had there been a problem before? Sheesh, some instructor I was.

“That’s good. That’s really good. See, I told you it would get better.”

Andy was nodding, his fair hair wet and shaggy, droplets falling onto the back of his sweatshirt. Freddy never did help the boys with stuff like their hair in the locker room.

“Did you see me go under?” Andy asked, pride in his voice. Like it wasn’t me who’d let him slip out of my hands.

“I did. Very brave. Way to conquer, my man,” Lucas said. He wasn’t looking at Andy now, but at me. With a look that said he knew exactly how Andy’s fear had been conquered.

“Yeah, you were right, Lucas. Nothin’ I couldn’t handle.” The words were spoken in such a way that I knew that was how they’d been sold to Andy.

“This is Lily. My teacher.”

I held my hand out, but Lucas had just put his hand-shaking hand on Andy’s shoulder. He just nodded in my direction. “Lily,” he said slowly. “Thanks for taking such good care of my guy.” Sarcasm dripped from his voice.

Andy was puffing up again—obviously loving that he was Lucas’s “guy.” But I barely noticed; my brain had gone semi-dead when Lucas said my name. His voice was smooth and deep. And dark. So, so dark.

In high school, I snuck into the school pool really late at night, had the place to myself. I did that from time to time, just to get away. I never swam, though—I was too much of a goodie-goodie to break that much of a rule. Plus the whole safety thing stopped me. But one night, after a particularly galling scene of listening to my father berate some poor flunky on the phone, I did go in.

I dove from the high board in just my bra and panties. No lights were on, and when the water swallowed me up I was cocooned in deep, wet darkness. It was disorienting, scary, and exhilarating all at the same time.

That’s what it felt like when Lucas said my name.

“I’m supposed to get some information from you?” he asked me. “Like how he’s doing? Stuff to work on?”

There was a tiny bit of vulnerability in his voice, which was in contrast to the sheer physical confidence he seemed to exude.

His eyes—brown, a deep, lovely shade of brown—darted between Andy and myself, and I realized he was uncertain.

“Yes,” I said, summoning all my father’s bullshitting skills. “Andy is indeed becoming more comfortable in the water, and that is leading to increased confidence in his abilities. I think that our next session will show even more improvement.”

Lucas was nodding, but his eyes—so expressive, those brown pools, when the rest of his face was impassive—sparked with skepticism.

Yeah, people always knew when my father was bullshitting them, too.

“In the meantime,” I pushed on (sadly, my father’s daughter), “you could work with Andy on his floating. Easy to do in the tub. A few minutes on his back, then a few on his front, with his face to the side to breathe.”

“We don’t have a bathtub,” Andy said.

I saw Lucas clench the hand that wasn’t resting on Andy’s shoulder.

“We’ll figure something out, buddy,” Lucas said. Andy looked up—way up; Lucas had to be six-three—and grinned at his older brother. That grin said Andy truly believed that Lucas was capable of creating a bathtub where none existed.

Hell, maybe he was.

“We need to get going, buddy,” Lucas said, turning Andy toward the exit. They started walking away. After a couple of feet, Andy turned and said with his lopsided smile, “Thanks, Lily, see you next time.” He waved his little hand, his sweatshirt too large for him, the sleeve almost swallowing him up.

“You bet, Andy,” I said. My hand was still raised in a wave when Lucas turned around. His gaze was intense again. My hand froze where it was—midair, mid-wave.

“Thank you,” Lucas said so softly I wasn’t sure if he’d actually spoken the words or mouthed them. “Lily,” he added.

That word I heard. All the way through my body.

Oh yeah, she is definitely hoping to see more of Lucas and so are you. You can find In Too Deep at the following vendors.

To keep in touch with Mara, visit her website at www.marajacobs.com and her Facebook Page at https://www.facebook.com/pages/Mara-Jacobs-Author/141802575897824.

Mara and I welcome your questions and comments. Stop by next week for another first meeting excerpt on First Sight Saturday.