Visiting today on First Sight Saturday is Alica Dean with, Ruined, her vintage romance novella, part of the Martini Club 4 series written by several authors and set in the 1920s.

Here’s more from Alicia about the origins of the series. Ruined is part of a fun series I did in conjunction with three of my writer friends. We have been meeting for martinis at the Martini Lounge in Edmond, Oklahoma nearly every Friday for the past four years. From those get-togethers, we developed the idea to write a series centered around a Martini Club. Those stories are finally completed, and we’re pleased to present the Martini Club 4 series…

Fun fact about Alicia: Even though I am not from there, nor have I ever lived in Cincinnati, or Ohio for that matter, I am a huge Cincinnati Reds fan. I’ve taken my son, who is 22 now, on the 850 mile road trip to Cinci twice, just to watch the Reds, and I hope to go again before long. I’ve also watched them play in other cities; Kansas City, Houston, Atlanta, and St. Louis.  I usually try to slip in a mention of the Reds in most of my stories, but in this one, I had to settle for the dreaded New York Yankees due to the setting. 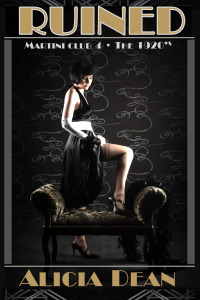 Setup of the scene – My hero has traveled from Philadelphia to New York City in search of his childhood friend and former fiancée. He’s in a speakeasy questioning one of the locals and searching for clues.

The bartender slid the hooch in front of them. Vince took a sip, surprised to find the whiskey smooth and full-bodied, not like the coffin varnish normally served in juice joints. He turned to his new friend. “You know a girl named Cynthia who hangs out here?” He withdrew his wallet and pulled out the small photo of Cynthia—hands on hips, making a kissy face at the camera–taken last year at the neighborhood barbecue.

Tim swigged the whisky and squinted at the photo. “Huh, Cynthia… Can’t really place her…wait. I think she’s one of Oscar’s girls.”

Something unpleasant shifted in Vince’s chest. “Oscar’s girls? What’s that supposed to mean?”

“A short skirt.” The guy shrugged. “Oscar is…you might say…a…professional party host. He throws these bashes at his place and lines up gorgeous dolls to, you know, entertain the clientele. I never been to one myself, too rich for my blood. But word gets around, ya know?”

Fury pumped through Vince’s veins. His fingers tightened around the photo. Not my Cynthia… “You must have her mixed up with someone else.”

“Don’t think so.” He pointed at the beauty Vince had been eyeballing earlier. “Ask Eliza. She works for Oscar too.”

An illogical wave of disappointment washed over him. He didn’t even know the dame, why would he care if she was a party girl?

He stood and threw a few bills on the bar. “See you around, pal. A little tip, though.” He slapped Tim on the back hard enough that he coughed and nearly spit out his drink. “You might not want to razz any other former prizefighters you happen to meet.” He winked. “Not all of them are as much of a pussycat as I am.”

Tim gave a jerky nod. “Sure yeah, thanks for the drink. Take it easy.”

Vince wound through the crowd until he reached the stool where the broad was sitting. She looked up at him, golden eyes rimmed by black make up, pouty pink lips made for kissing.

But then, that’s what those lips got paid for—kissing and a whole lot more.

“Can I help you?” Her voice was just as he imagined, sweet with an underlying husky tone, but he hadn’t predicted the English accent.

She inclined her head. “Free country.”

“Yeah, but not everything is free, am I right?” He slid onto a barstool next to hers.

She raised a brow, a faint hint of amusement hovering on her lovely mouth. “You’re quite astute, Mr….?”

“Taggart, Vince Taggart. And you are?”

“Eliza Gilbert. Is there something I can do for you?”

Instinct told him coming on too strong with the interrogation would make her clam up. Something about her made him think she would scare easily. She had a wary look, but at the same time there was something defensive and tough behind the pretty façade. As if she was waiting for, expecting, an attack and when it came, she’d strike back like a wounded tigress.

“I just saw you sitting here all alone, thought I’d stop by and say hi.”

She nodded. “My friend, Meggie…Lady Margaret…is the singer. I came to watch her show.”

“She’s very good.” He glanced around nonchalantly. “Draws quite a crowd. Of course, the booze doesn’t hurt anything. It’s good to find a nice place to knock a few back.”

“Of course, with your accent, you’re definitely a local.”

She laughed, an unexpected and delightful sound that he felt clear in his chest. “Right, a Yank through and through.” Her eyes twinkled. “Where are you from?”

“Philly, Philadelphia. I’m in town looking for someone. A girl. Her name’s Cynthia Yost.” He showed her the photo. “Do you know her?”

Her brows drew together, and she shook her head. “She doesn’t look familiar. She isn’t in trouble, is she?”

“I’m afraid she might be. I haven’t heard from her in days, and she was supposed to come home a week ago.”

He didn’t detect dishonesty in her response, but then, she was a pro. Maybe she was good at lying. He wouldn’t push her tonight, but he’d be back and push a little harder next time. For now, he might as well play nice. “Can I buy you a drink?”

She favored him with another of those head spinning smiles. “That would be marvelous, thank you.”

Ruined is available for pre-order on Amazon for $0.99 until February 26. Its regular price will be $2.99. And don’t forget all the other stories in the vintage romance Martini Club 4 series, listed below. You can find them all at this Amazon link.

Thanks so much for visiting me today, Alicia, to share your story from an up-and-coming time period for historical romance!