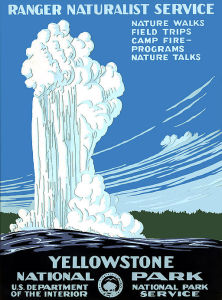 Yellowstone National Park was established by the U.S. Congress on March 1, 1872. It was not only the first national park in the United States, but the first one in the world! Native Americans were active in what we call Yellowstone for thousands of years before scientific exploration and mapping of the area began in 1869. For those of us accustomed to the lagging partisanship of current government, the wisdom and speed of protecting the region in only three years is almost breathtaking. The geologic features of the area are fragile and probably would have been damaged or lost forever if the land had been left available for private settlement.

Originally under the direction of the Secretary of the Interior, the department lacked the budget, legal authority, or manpower to manage activities within Yellowstone’s borders. They struggled to fend off commercialization of every sort while also dealing with poachers and vandals. In 1886, control was given to the big guns, (the Army) that built a post at Mammoth Hot Springs, and soldiers’ cabins all across the park to allow for regular patrols. This plan was so successful that soon the Army also had control of Sequoia, Yosemite, and Kings Canyon National Parks. 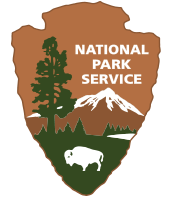 Woodrow Wilson created the National Park Service, an agency within the Department of the Interior, in 1916. Much had been learned from the years of military management, and many of the policies—even the fun ranger hat—were carried forward. The NPS not only oversees our fifty-nine US National Parks, but also monuments, historic sites, battlefields, and hundreds of other locations important to the identity of our country and its landscapes.

So, happy birthday, Yellowstone! You were such a brilliant idea that there are now over 6,000 national parks in the world, on every continent except Antarctica, if I read this Wikipedia list right. You are the fun-to-watch fluffy kitty sitting on top of a roaring lion of a hotspot, and hopefully you will continue to provide lessons about ecosystems and geologic wonders for many generations to come.

If you found this interesting, you might like to check out the other Yellowstone posts I’ve written so far.

Why is Yellowstone Hot?

Geological History: What is Yellowstone’s Potential?