Today on First Sight Saturday, where we see a first meeting excerpt, I’m thrilled to welcome a fellow Love Historicals author, Lana Williams, with her new Victorian romance titled Loving the Hawke. A fun fact about Lana is that she loves M&Ms. She says any kind will do, but plain are her fave. They are must-haves when she is writing or editing, so pretty much a daily habit!

Here’s a little more about the story: Loving the Hawke is the first full-length book in a brand new series, The Seven Curses of London. Two wounded souls, a wallflower and a war hero, stumble upon each other time and again in slums and ballrooms, realizing they fight a common cause and share an unbridled passion. Will the curse they fight be their downfall? Or will love win the day? 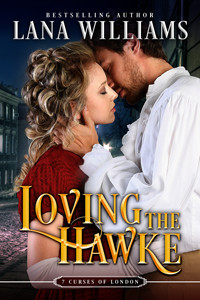 EXCERPT  Nathaniel Hawke, unwillingly retired captain of Her Majesty’s Royal Navy, couldn’t believe his eyes. Considering all he’d witnessed during the Indian Rebellion, the Second Opium War and his military service, that was a considerable feat.

Yet no matter how hard he stared at the cloaked figure speaking with several girls near the bridge, it didn’t change what was happening. A well-to-do woman was accosting several young girls, leaving their factory jobs for a quick meal before returning to work. She was about to ruin an entire week’s worth of reconnaissance.

He’d positioned himself in the doorway of a shop several doors down from the bridge entrance. He’d hoped to identify the men said to be luring girls from their factory jobs with the promise of high wages as a house maid, only to put them on ships to be sold as prostitutes in faraway lands or to serve in London brothels.

Instead, a lady, by the fitted cut of her cloak, was drawing far too much attention by attempting to speak to the young women. What on earth was she about? If one of the men he was trying to find observed her, she would be in grave danger. She might very well find herself on board a ship alongside the girls to whom she was speaking.

Nathaniel waited several precious moments, hoping the woman would proceed on her way. But no. She continued to speak earnestly with the girls. Several more stopped to listen.

That was the last straw. The crazed woman was ruining his chances of identifying the men running this operation, which would allow him to save the girls. Now he’d have to take the risk of revealing himself in order to force her to move along before something terrible occurred.

As he stepped out of the doorway, cane in hand, he once again cursed the damaged leg that caused him to limp. It was the reason he’d been driven from his previous life where he’d made a difference. Its constant ache was an unwelcome reminder that he could no longer protect his men, that he was no longer needed.

He thrust aside the dark thoughts as he tried to decide how to play this particular mission. He’d been forced to disguise himself on various operations during his military career, so while this was nothing new to him, he didn’t care to do draw attention to himself in a place he wanted to return to. Blast the woman.

Out of the corner of his eye, Nathaniel caught sight of a man strolling toward the bridge. With his bowler hat and better-than-most attire, he might very well be one of those Nathaniel had been watching for. Double blast.

Nathaniel had nearly reached the woman. Her face was hidden by a fawn-colored bonnet with a ridiculous bow on the side of it. He took an immediate dislike to the ugly thing.

“Excuse me,” he said, with a slight bow. “May I have a word with ye, miss?” He did his best to disguise his accent, not wanting to display his Cambridge education.

The woman turned in surprise as the side of her bonnet had blocked his approach. For some reason, he was stunned by how attractive she was. Large hazel eyes framed by dark blonde lashes and brows regarded him suspiciously. Her alabaster complexion was flawless with the exception of a tiny dent in her chin. “No, thank you.” Her tone was polite but firm before she turned back to the girls.

“Beggin’ yer pardon, but I must insist.” Her refusal made it difficult to hide his irritation. His position as an officer for so many years meant no one refused his orders. At least until now.

She glanced at him again, brow furrowed. Then she looked back at her audience. “Do any of you know this man?”

“No,” they all agreed as they stared at Nathaniel. They seemed to be waiting to see what might happen next.

“There’s no loiterin’ in this area,” he persisted. He gestured with his hand, hoping the girls would continue on their way so he might have a moment with the woman to explain the danger.

The older girls tugged the younger one’s sleeve. “Come along with ye, Alice. This don’t concern us.”

“Wait,” the woman said, sparing a moment to glare yet again at Nathaniel. “If you’re truly interested, here’s the card of the shop I mentioned.”

Alice reached out a cautious hand to take it, staring at it as though it might contain a hidden message. “I don’t know…”

Nathaniel snatched the card from the girl’s hand to read it. Madame Daphne. Seamstress. “What is it ye’re askin’ these girls to do?” he asked, allowing suspicion to color his tone.

“None of your business.” The woman seized the card from him then made a shooing motion. As if that would have any effect on him.

“Ye’re causin’ trouble for these poor girls,” he said and turned to glare at them, hoping it would work better on them than it had on the woman. “Leave them in peace.”

“We must be goin’.” The girls eased back, pulling Alice with them, but not before she took the card from the lady once more.

With one last glance over their shoulders, the girls hurried down the street as though anxious to put more distance between themselves and the woman.

Nathaniel breathed a sigh of relief. Now he need only get her to do the same. Perhaps his vigil wouldn’t be wasted after all. “If you would—”

“How dare you.” The anger in the woman’s tone surprised him as did the passion that flared in her eyes. But it didn’t sway him from his purpose.

He leaned close, intending to intimidate her, dropping his East End accent. “Do you have any notion of the danger you’re in at this very moment?”

LOVING THE HAWKE is available at Amazon

Connect with Lana at:

Thank you, Lana, for sharing this wonderful first meeting with the readers here! I, for one, love wounded heroes so this is definitely on my TBR pile.

3 Responses to Loving the Hawke on First Sight Saturday