Vain, the third book in my Evolution Series, has just been released!

Here is the short blurb: A tailor’s abandoned daughter fashions a vain nobleman’s tunic, finding passion between the neckline and hem as misfortune forces her into his precarious aristocratic world.
This series is set in Charlemagne’s empire in the 830s. Here is an excerpt of the first meeting between my hero and heroine. The scene doesn’t need a setup since this is the very beginning of the book. 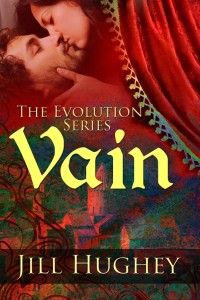 BEGINNING OF EXCERPT
When the door opened, a surge of hope pressed up in Lily’s chest. Perhaps a neighbor had spun some wool and needed the yarn woven into cloth. Or maybe a clever wife had convinced her husband she required a new tunic for Easter and the accompanying celebration of spring. Lily smoothed the scrap of linen she’d held balled in her sweaty hands and pretended to inspect the new embroidery pattern she’d half-heartedly sewn hours ago, hoping to appear serene, as if everything in her father’s shop was absolutely normal.
The commanding figure who filled the narrow doorway reinforced her hope and spurred foreboding at the same time. He was a consistent customer, and their wealthiest. He spent his money freely with all his merchants, as he should. Only the Lord of Ribeauville could wear such an outrageous fur cap without eliciting howls of laughter all through the town. His citizens did not even snicker, firstly because he was the lord of the townfolk and all who lived on a wide swath of countryside surrounding Ribeauville, and secondly, because the spata hanging from his well-crafted belt expressed more about the man than the tassel of silk dangling from his hat.
Lily sized up the parcel tucked under his arm as she rose respectfully from her chair. The lord of the town only visited the shop to conduct business. Yet today his sharp eyes darted around, noting the bare shelves that once held bolts of cloth and the small loom, empty of warp or weft. He peered at the door to the living quarters before settling his penetrating hazel gaze on her.
Lily fingered the leather needle case hanging at her waist. “Good day, my lord,” she said, greeting him as if she were the proprietor of the shop. What choice did she have?
“And to you,” he replied with a slight nod of his head. He glanced around the shop again. “May I speak with your father? Have a commission for him.” He lifted the bundle wrapped in rough flax cloth as proof.
A commission. Work. Lily’s nails cut into her palms as she resisted yanking the promising parcel from his hands. “I am sorry, my lord. Father has gone to Strazburg for supplies.” She indicated the desolate shelves with an apologetic smile. “You may give your order to me. I will see that your garment is made to your liking.” Her words were confident, though her knees quivered. She pressed them together so he would not see her trembling.
The Lord of Ribeauville studied her. “When did Willis leave?”