I seem to be on a roll of life lessons from football. Both our sons play. Last week the younger son, a freshman, had his first game with his junior high team comprised of grades 7-9.

Obviously the object in football is to score by getting the ball across the goal line. To do that, you have to keep that ball moving forward, down the field, again and again, until you make it or you run out of chances. This requires eleven guys to work together and each do his job while another eleven guys are trying to stop them.

Something new for me this year is my attempt to photograph the games. We inherited a wonderful digital camera from my mother-in-law. This has added an unexpected dimension to the post-game for me because, as I was reviewing the pictures and showing them to Owen, he was explaining to me what was happening, what he was thinking and doing and experiencing, which, if you’ve been around many 14-year-old boys, is a bonanza of information.

I really loved his description of what he was doing in the series of photos below, and he gives us a great example of knowing your goal and keeping things moving forward. 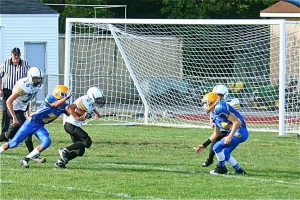 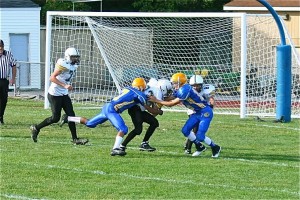 Above you see him making that block, but the ball carrier is getting slowed down. The objective is to get the ball across the line that is almost at his feet! 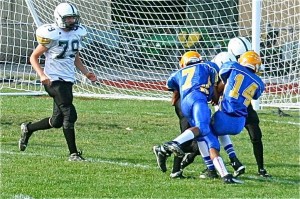 Our son stops blocking and starts tugging on his teammate to help him get across the line. And they score!
There are a ton of good lessons in this little sequence, but the one I really like is that we should never lose sight of our overall goal. Owen’s job was to block somebody else from doing his job. The GOAL though, was to get the ball across the line, and when Owen’s job of pushing his target backwards was actually impeding progress, he changed from pushing to pulling.
Recognizing the need to make that kind of change in our action takes maturity. You have to recognize what you are working toward AND have the self-control to choose actions that help you get there.
Focus on your goal and generally keep moving toward it. Know where you are and where you need to be. Don’t be distracted for too long on how forces in the world are trying to impede your progress. Don’t be preoccupied by the success of others. (After all, Owen didn’t have the glory of making the touchdown, but realized that his teammate’s success is shared by everybody!)
So, today’s lesson from football is to keep moving the chains, keep pushing forward, with your ultimate goal always the focus — in the larger scale of things — even as day-to-day you get tugged to one side or another, or even shoved backwards!
Our junior high won this game, and were followed on Friday night by the varsity players winning too! If you’ve read my prior two football posts (Filling the Gaps and How Badly Do You Want To Win?), you know what a big deal all of this success is for our team. And I’m gonna keep talking about it, so stop by again next week!
000000
← San Diego or Bust on First Sight Saturday
Unwritten Rules on First Sight saturday →