Every weekend, a guest author shares an excerpt of a first meeting between two characters on First Sight Saturday. This week we are joined by M.S. Kaye with her romantic suspense Fight Princess.  You’d better like this excerpt or else, because M.S. is a 4th degree black belt and instructor of Songham Taekwondo.

SETUP OF THE SCENE: Celise’s best friend’s boyfriend is dead, and she does not heed Cullen’s warning, slipped to her in a note as he’s being arrested for the murder. Instead she’s been snooping in his apartment which he apparently doesn’t appreciate. 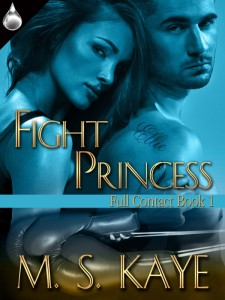 
Through the peephole she saw Cullen staring her down, as if he could see through the door. “I know you’re in there, Celisse. Your car’s outside.”
Celisse grumbled under her breath. Then she spoke loud enough for him to hear. “How do you know where I live?”
“It’s not that hard to get a person’s address—as you damn well know.”
Crap. How did he know?“What are you talking about?”
“You made it downtown so quickly because you were already in my apartment.” His jaw flexed as he continued to glare at the door. She was almost impressed he was able to maintain that intense, pissed-off posture and expression when she saw in his eyes that he was barely hanging on through the exhaustion. Like riding a bike, if he stopped, he would probably fall down.
She turned the bolt and opened the door. “How would I have gotten in your apartment—and why would I want to?”
“You flashed a beautiful smile at Alfie. Don’t tell me you don’t know exactly what you’re doing.”
Celisse hesitated. Hearing him say that… She wasn’t sure how to react.
He pushed the door open a bit further and slid past her into the apartment. She didn’t think to stop him until he was already past her. She turned and looked at him standing in the middle of her little living room, like a storm cloud in her usually calm and cloudless space. This small, cheap apartment was the first place she had ever lived where she felt completely comfortable.
She realized he was looking at her, not at her eyes. She crossed her arms over her chest. “What do you want?”
His jaw tightened again, and he met her eyes like lightning flashing across the sky. “Don’t ask me why in the hell you’d want to be in my apartment.”
It took her a second to realize he was answering her previous question.
“What did you think you’d find?” he asked.
“Certainly not stacks of hundred-dollar bills.”
“It’s none of your goddamn concern how much money I have and why. Stay out of my business.”
“No.”
“Excuse me?”
“My best friend’s boyfriend was murdered, and then the accused slips me a note that says things aren’t what they seem. What did you think I was going to do?”
He paused, and the glare in his expression that had about blinded her a few seconds ago dulled to the glower of the moon in a clouded sky. He turned and looked around her apartment—her TV stand with a couple movies on top, the potted plant next to the sliding glass doors, her one pathetic attempt at gardening, and then over to the bookshelf where he started reading titles.
She stood next to him. “What do you think you’re doing?”
“Does it annoy you?” He took a book from the shelf and flipped through its pages. “Someone going through your things, invading your privacy?”
Celisse snatched the book out of his hand, before he realized what it was.
“Are you pissed yet?” he asked.
“I wonder how it would look to the court if the police were called on you the same day you posted bail.”
He took a step toward her, and she backed up with her hands in guard position.
He stopped, and his voice was inside out from what it had been. “I would never hurt you.”
“You were arrested for murder today.”
His expression sobered, like fog pulling across a jagged cliff face. “I’m sorry. I never meant to scare you.” He walked across her living room, out the door, and down the stairs.
Purchase at:
Amazon – http://amzn.to/15xQX8O

To keep in touch with M.S. Kaye, please visit the following sites.
www.BooksByMSK.com
www.Facebook.com/BooksByMSK
Twitter  @mskosciuszko
Thanks for visiting with us today, M.S.! We welcome comments and hope all our visitors will come back every Saturday for a fresh first meeting.
000000
← Breaking Old Habits
There’s No Empathy In Football?!? →