There’s an awesome line in the movie A League of Their Own where the coach insists “There’s no crying in baseball!” One would think there wouldn’t be crying in football either, but I’ve seen players and spectators cry, from the youngest ankle-biter game to the high school varsity level. This is not usually from injury, but most commonly occurs after the game, due to a win or loss. 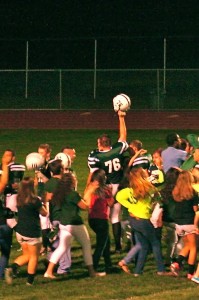 We’ve been enjoying a roller-coaster season, and I truly mean enjoying because, in the past, we were always in the agony-of-defeat category. This year’s games that end as a win are still mind-blowingly sweet to our unspoiled community.

Last Friday we dominated, winning 35-6, and though I loved every minute of it, I also felt a twinge of empathy for the fans in the visitor’s stands across from us. Just the week before we were them, losing 28-6 at a nearby school’s Homecoming celebration and feeling heartbroken for our players who had been on a winning roll.

Now, seven days later, the Fates were smiling on us again. We cheered wildly at our every touchdown, and also every time our opponent fumbled and every time a referee’s call went our way.

As the game entered its final minutes, when victory was assured, I said to the couple sitting next to us, “I feel a little bad for them,” pointing over the gulf of green grass and white lines that separated the winners from the losers.

My husband and the other husband immediately retorted, “Why?”

“Because we know how it feels.”

Both the men pretty much said, “I don’t feel bad at all. Our boys have earned this win.”

I wholeheartedly agree with the earning part, but the other mom understood what I was saying.

In any contest like a football game, somebody has to win and somebody has to lose. We might, in our more humanitarian moments, wish it could be different, that every individual could leave every arena feeling like a winner. But when I step back, I think there is actually a good life lesson in wins versus losses. Our current version of society clings to the concept of every kid being a winner in some screwy hope of imposing self-confidence on children no matter what their level of performance.

It is a false notion. In fact, I think, with our society structured the way it is today, we do a disservice in creating such a sense of false entitlement. Success is not handed to most of us on a silver platter. In adulthood, you don’t get a trophy just for getting out of bed every day. Winning requires effort for those of us not blessed with incredible luck and child-prodigy talent or looks.

The fact is that, as soon as the everyone’s-a-winner child goes to get a job, someone is going to “win” the job and many people are going to “lose.” Competition doesn’t end there. The person willing to show up every day and work hard is, in most cases, going to at least retain that job and at most excel to higher and higher positions. Even in personal relationships, the person who is able to filter the losers (and by this I mean the parasite or the drug addict or pick-your-favorite-negative-energy-source) out of his or her sphere, and also work through the rough parts of a relationship with positive people is probably going to end up with higher quality friends, partners, or spouses.

Maybe it is “wrong” to look at life in such a competitive light, but I challenge you to argue that competitive is not an accurate descriptor for our current society. So, do we want our kids to be prepared for reality, or to enter adulthood with rainbow-pony ideas about themselves? I choose reality for mine.

However, understanding that our world thrives on competition doesn’t mean we have to be emotionless destructive machines. I’ll bet that the kid who is crying after a loss or win will do well in the future. There is drive and desire in those tears. There may be recognition of tasks that could have been done better, or the elation of efforts finally paying off. He or she obviously cares, has poured heart, body, and soul into the game, and will continue to approach life with commitment and passion.

I also think the emotional player will be the first to hold out a hand to help a “loser” to his/her feet, because, like those of us temporarily in the winner’s stands, we know how it feels to be on the other side of the scoreboard. There is empathy in football, and in life, when it is properly played.

If you enjoyed this post, read my other Life Lessons from High School Football entries from our roller coaster 2013 season.
Filling the Gaps
How Badly Do You Want to Win?
Don’t Lose Sight Of Your Goal
Breaking Old Habits