In a complete coincidence, this week’s First Sight Saturday guest has written a steamy version of North and South, Elizabeth Gaskell’s period romance for which I recently started releasing a serialized sequel. I guess Brenna Chase and I have similar taste in literature! Brenna’s fun fact is that she was an air traffic controller for the U.S. Army. Thank you for your service, Brenna, and thank you for sharing your first meeting from North and South: The Wild and Wanton Edition! 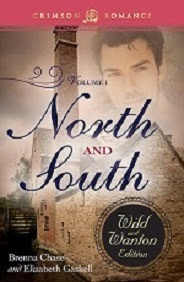 Set up of the scene: Margaret Hale has been helping her father find a house to rent in the manufacturing town of Milton in the north of England, where she and her family have just moved from the south. He has gone to speak to their potential landlord, while she returns to their rooms at the hotel where a guest is waiting to speak to Mr. Hale—proud, passionate cotton mill owner, John Thornton.

EXCERPT:
“I beg your pardon, ma’am. The gentleman was gone so quickly, I had no time to tell him. Mr. Thornton called almost directly after you left; and, as I understood from what the gentleman said, you would be back in an hour, I told him so, and he came again about five minutes ago, and said he would wait for Mr. Hale. He is in your room now, ma’am.”
“Thank you. My father will return soon, and then you can tell him.” Margaret opened the door and went in with the straight, fearless, dignified presence habitual to her. She felt no awkwardness; she had too much the habits of society for that. Here was a person come on business to her father; and, as he was one who had shown himself obliging, she was disposed to treat him with a full measure of civility. Mr. Thornton was a good deal more surprised and discomfited than she. Instead of a quiet, middle-aged clergyman, a young lady came forward with frank dignity,—a young lady of a different type to most of those he was in the habit of seeing. Her dress was very plain: a close straw bonnet of the best material and shape, trimmed with white ribbon; a dark silk gown, without any trimming or flounce; a large Indian shawl, which hung about her in long heavy folds, and which she wore as an empress wears her drapery. He did not understand who she was, as he caught the simple, straight, unabashed look, which showed that his being there was of no concern to the beautiful countenance, and called up no flush of surprise to the pale ivory of the complexion. He had heard that Mr. Hale had a daughter, but he had imagined that she was a little girl.
Instead, here before him was a full-grown woman. Her wide red lips were curved into a slight smile, and his gaze lingered there a moment as he recovered from the not unpleasant jolt to his senses her appearance had caused. He looked back up into her eyes. She still regarded him in an even, open way, as though she were weighing him rather than the contents of his pocketbook, which was a novel thing of late. He did not know what to make of her, but he thought he should like to get to know her, if she were anything like he had heard of her father.
As for Margaret, her composure faltered and she stood still. Society had not prepared her for meeting such a man as the one who stood before her now, for she had never encountered one who seemed so vigorous. He seemed to suck the air out of the room, only to release it again charged as if before a storm. She had imagined Mr. Thornton to be her father’s age at least, if not older, perhaps even a little stooped from sitting at a desk tallying figures. This man was anything but what she had pictured. He was older than she, but only by a few years, she supposed, with not a bit of gray hair to be seen. But what drew her attention most were his eyes; they were as clear and intent as the man she had dreamt of only a few nights before, and her skin tingled where his gaze wandered. Heat rose up her neck as she tried to force the images from the dream away, and she drew in as deep a breath as she could in a corset that seemed suddenly too tight, in an effort to regain her self-control and her manners. “Mr. Thornton, I believe!” said Margaret, after a half-instant’s pause, during which his unready words would not come. “Will you sit down. My father brought me to the door, not a minute ago, but unfortunately he was not told that you were here, and he has gone away on some business. But he will come back almost directly. I am sorry you have had the trouble of calling twice.”
Mr. Thornton was in habits of authority himself, but she seemed to assume some kind of rule over him at once. He had been getting impatient at the loss of his time on a market-day, the moment before she appeared, yet now he calmly took a seat at her bidding.
“Do you know where it is that Mr. Hale has gone to? Perhaps I might be able to find him.”
END OF EXCERPT
Brenna has released 3 volumes of North and South: The Wild and Wanton Edition. These links will lead you to volume one.
Amazon: http://tinyurl.com/moycb2s
Barnes and Noble: http://tinyurl.com/k9t7uy4
iTunes: http://tinyurl.com/lajgfh2
If you’d like to keep in touch with Brenna or learn more, you can find her here:
Website: http://brennachase.com
Facebook: https://www.facebook.com/pages/Brenna-Chase-Author/644568775570158
Twitter: https://twitter.com/AuthBrennaChase
Pinterest: http://www.pinterest.com/brennachaseauth/
Brenna and I both welcome your questions and comments, and I hope you will return for a new excerpt every week on First Sight Saturday.
If, after you enjoy Brenna’s spicing up of North and South, you still want more, you can start my sequel here.
000000
← Valentine’s Day – Fun Posts and Giveaways!
Chapter 4 – Becoming Mrs. Thornton →