Each week a guest shares a first meeting excerpt on my First Sight Saturday feature, and today is Deborah Kinnard’s turn. She says her fun fact is she once face-planted into a pizza in front of 30+ friends and acquaintances. I don’t know if I call that “fun” but I’m sure it’s a memory she’ll never forget. Deborah brings us a really fun first meeting between a celebrity and an author from Love Only Knows, her contemporary romance. 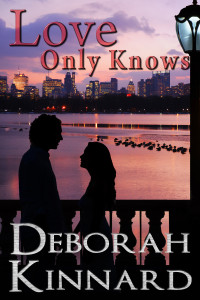 “Hello,” said the girl behind the books. He froze, book hanging from hand. She glanced up when he didn’t respond. For the life of him, Jon could produce no sound. Two gazes met and locked. The lockup shocked him, rattled him down to the cellular level. Almost as though he knew the person behind those large, heavily lashed gray-green eyes.

The last time he’d seen eyes so unforgettable, he’d been singing a duet with Nelly Furtado.

This petite girl, jailed in an unnecessary prison of books, looked as stunned as he felt.

He felt the silence drag out too long. “Hi,” he managed.

She appeared not to notice he’d picked the only word in English that said nothing.

“How should I sign it?” Gently she freed his copy from his powerless hand and opened it for signing, her black felt-tip pen poised.

Weakly he grinned, hoping a smile might cover his gaffe.

“Cut me a little slack here.” She gave him a brilliant smile. “I’ll need, like, your name.”

What a grin. She knows she’s being a smartass, and she’s not apologizing.

Chuckling, he leaned close, wanting to keep his identity private—just for her. Besides, it let him close enough to catch the scent of her hair. Some kind of herb shampoo. The mingled fragrance of hair and body spoke of caresses and Christmas. It was children skipping in fields of gold. It whispered of butter and homemade apple pie and slow, comfortable kisses under a winter moon.

Her head snapped up and she looked freshly startled. The instant buzz of electricity clamored inside him as they both leaned back an inch to regard each other.

Good grief, how am I supposed to break away from those eyes? They’re practically caressing me. How does she do that with no more than a glance?

Sexy as hell. But what if she’s…

He glanced at her left hand. His grin widened as he saw no wedding ring.

“N-never mind,” she stammered, an engaging blush covering cheeks as fair as antique porcelain. “I know how to sign it.”

Does she recognize me?

“You do, eh?” He fingered the zipper edge of the hoodie. “I’m incognito. Like to keep a low profile. It usually works around here.”

Unable to bring himself to straighten up—he might lose the scent of her hair—he leaned in so close he could almost taste her, propping his elbows on the stack of hardbacks to keep his balance. He leaned purposefully, closing the gap, making it intimate. He rarely encroached so boldly on anyone’s personal space, but now he did, and without shame. He couldn’t bear to increase the distance that separated them, no, not by so much as a millimeter.

Lady, tiny fair lady, I’ve got to know you. You understand—right?

She took up the pen between impossibly dainty fingers. He peered down eagerly at tidy round handwriting.

To Jon, Hope you enjoy the book as much as I enjoy all that great music. Rebecca Tillman.

Her smile all but stopped his breath as she handed the book back and answered his question regarding recognition. “When you laughed. I knew you from that.”

“I’ll have to remember that,” he said, blowing on the fresh marker ink to dry it. Aware of a sharp click of the teeth from her next customer, he stepped aside—not too far, not far enough to lose the heady scent of her.

Strike now, J, while she’s off balance. How still she goes, like a doe who spots a hunter.

“Hey…are you free after…” He made an expansive, if vague, gesture. “This?”

The woman in line hissed impatience, clearly not a fan of his. Though Rebecca—what a formal name for so slight and lovely a girl—knew him once he’d laughed. For once, his high profile cheered him immensely. Usually it worked against him while dating, for Jon usually had to spend the first few hours convincing a woman that fame didn’t make him special.

And that he was straight.

How soon can I ask her out?

She blinked. Thick, long, dark brown eyelashes hid her glorious eyes for a second. “Um, yeah.” She yanked a business card free of a dainty quilted case and scribbled a number on it. “Call me.”

He grabbed her card as eagerly as a ticket to heaven. Jon gave her a last helpless grin, closed his autographed first edition carefully, and stepped away. He looked back but once, gratified that she followed his retreat with that artless, caressing gaze. All in all, she looked as dumbstruck as he felt, and oblivious to the woman telling her to autograph it to “Mamie.”

He edged out of visual range to lurk between tall wooden magazine racks. Still as aware of her as he’d been moments earlier, while in her face. The sheer pull of her presence was so compelling he could barely believe it. And yet her seduction was an unassuming thing. She hadn’t lifted a finger to attract his attention. No, she was here to sign books and build her tribe. Not to utterly bedazzle a lonely single guy in an old hoodie and nerd glasses. Unlike some women he’d met, she had no pre-designs on him. He’d met predators in the past, sure enough.

This petite fairy of a girl had not come here to captivate a LA transplant pop singer.

To cover his bewilderment, Jon thumbed through fresh copies of GQ, Sports Afield and Out, and others, seeing nothing. Instead of the glossy pages he saw Rebecca’s glorious, come-hither eyes.

He fidgeted and speculated and fretted, notions and possibilities rattling through his mind like a freight train. He endured until the combined line dwindled to a couple people, watching, biding his time. But near the end the impulse to go over there got too strong to resist. He couldn’t wait a moment longer. Almost…she was almost done signing. In three. Two. One.

END OF EXCERPT
I love a hero who goes for it! If you want to read more about Jon and Rebecca, go grab a copy of Love Only Knows at Amazon.
You can find Deborah at her website www.debkinnard.com. She also tweets www.twitter.com/debkinnard.
Deborah and I welcome questions and comments. Come back each week for a First Sight Saturday excerpt from a fresh new author.
000000
← A Masterpiece Unraveled Cover Reveal #coverreveal
The Wilder Brother on First Sight Saturday #firstmeeting #excerpt →