Nikki Lynn Barrett shares the cover for her October 2014 release, A Masterpiece Unraveled. Take it away, Nikki!

In spring 2014, I introduced readers to Hunter Beckman and Rebecca Lange, two survivors of a tragic accident. Little did I know when I started their story that it would turn into a trilogy…..But it did.

And today, I’m pleased to unveil the cover for the second book in the Masterpiece Trilogy, which is A Masterpiece Unraveled. 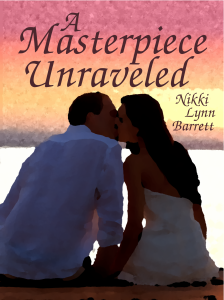 As love blossoms, twenty year old secrets threaten it all….

Becca and Hunter have always tried to make sense of a tragedy, but they never fully asked why. Why were they on the same plane? Where were they going, or coming from? Recent events force them to find out everything they can about the plane crash and the events that led them there.

Becca’s always been strong. She’s always found a safety net in Hunter, the man who saved her as a child and always stuck by her, giving her reason to go on when no one else gave her a chance. Now, she fights to keep her strength going, but her fears begin to get the better of her, and the facade she tries to hold up threatens to crack.

Hunter is learning to fight his demons and put them to rest, but he can’t help but worry about Becca and the future they’ve just begun to build. She’s become the withdrawn person he’d been for the past few years and he doesn’t know how to help, unless he finds the answers they both are desperate to know.

They’ve always battled every storm together, but a new storm could sweep in and blow the foundation right out from under them….

“So,” Vince waved his hands at the chaos of packed and unpacked boxes. “You’re really moving.” His tone was flat.
“What’s left to keep me here?”
“I don’t-” Vince turned to Hunter, mouthing a silent plea of help.
Hunter held back a retort. “She asked what’s left to keep her here.”
“You have a job you love, don’t you? Friends? Family.”
A sound escaped from Becca’s throat. “I lost my job because I don’t have a voice, my friends understand why I’m going, and what family? My grandparents made it clear ages ago they never wanted me.”
Once again, Hunter interpreted.
“I can’t convince you to give me a chance?” Even though it came out as a question, Hunter could tell it was more of a statement.
Becca shot to her feet. “You don’t want me by your side for love! I don’t know what your motives are, but you don’t love me. What is it you want really? I’m tired of the lies from everyone.” She shot Hunter a frown at that statement, too. “If you loved me for me, you’d be able to understand what I’m telling you right now.”
“I do care for you.” Vince said after Hunter finished.
“There’s a difference between caring and love.” Hunter jumped in, immediately regretting it. He knew as well as Becca that Vince had ulterior motives. That much was obvious.
“I can’t talk about it.”
For the first time since he’d met the man, Hunter noticed how uncomfortable Vince got all of a sudden. He shifted his weight from side to side and fidgeted.
“Then I have nothing more to say to you. Enjoy your life, Vince.” Becca stumbled away to the bedroom, closing the door with an echoing thud.
“I don’t think I have to interpret what she just said for you to get the hint that Becca isn’t staying with you.” Hunter said, facing the man. He wasn’t even gloating. He just wanted Vince to either say what he wanted or get the hell out.

Find Nikki on the web

Thank you, Nikki, for sharing this beautiful, artistic cover. Best of luck with the new release.

One Response to A Masterpiece Unraveled Cover Reveal #coverreveal