Here’s the moody cover for Endless as the Rain, book one in the Taken series by M.S. Kaye. 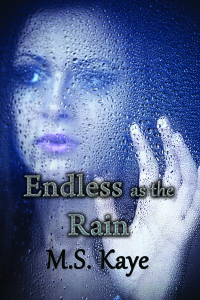 When Adriane Graham discovers a city councilman is part of an embezzlement ring, she doesn’t realize her life is in danger until Alec Kadan, the son of a mobster, kidnaps her—not to kill but to protect her. But why? And how does he know so much about her, right down to her favorite books? In order to find out, Adriane must get past Alec’s anger and secrecy to unravel his past and find the key to her own.

The thought that was still eating at me was the possibility of rejection. I’d heard women talk about how almost any woman can get a man’s attention once, that men generally have a strong drive and will usually take most opportunities. But Alec was strong-minded. If he truly didn’t want a woman, I was certain he’d reject her.

It was a risk.

One I was willing to take.

I peeked into the hall to be certain no one was around, and then walked silently through the shadows. I turned the corner toward his room.

My mind couldn’t help but to wander. I began to see images—at first his surprise, and then understanding, and hopefully his arousal. I saw kissing and removal of clothes before lying down. I hoped he wouldn’t feel the need to talk or to ask why. I wasn’t sure I’d be able to hide my true motivations.

I couldn’t do it.

I wouldn’t trick him like that—hide the truth from him just to have what I wanted.

Only a couple feet from his door, I turned, somehow feeling pride, shame, and disappointment all in that one turn.

I managed not to jump.

I turned half way to look at him over my shoulder. “I’m sorry I woke you. I was just feeling restless.” It wasn’t a complete lie.

As I looked at him, my resolve wavered for a second. His expression was beyond kind but with a little concern—for my sanity, no doubt. He still wore his slacks and dress shirt but barefoot, and his shirt was untucked and unbuttoned. His hair was a little disheveled, and what absolutely killed me was the slight sheen of his skin, as if I’d woken him from an intense dream. His skin seemed to glow in the faint light, and his eyes took on that deep shadowed effect. Why did he have to look like that? He was perfect in every other way. Why this too?

“Is something wrong?” he asked.

So as not to seem rude, I turned to face him properly. “No. I was just restless. Please go back to sleep.” And please don’t look at me too closely.

He took a step closer. At least it was dark. I ran my fingers through my hair to casually pull it back.

He took a breath.

I crossed my arms, pretending I was cold, but really trying to hide my chest. I worried, though, that I only succeeded in creating more cleavage.

Did his eyes just flicker? No, it was too dark to see his eyes clearly.

He didn’t respond, and I continued my escape. Once my door closed, I pressed my back against it, head leaned and eyes closed. My heart pounded. It shouldn’t be legal to look like that.

Faintly, I heard his door close. Then I jumped at a loud pounding sound, like someone punching a wall, and his voice, though muffled from distance. “Dammit.”

It was only maybe ten minutes later that I heard his footsteps. The sound of his shoes, no longer bare feet, quickly moved down the stairs. It was only three in the morning.

Endless as the Rain can be found online:

M.S. Kaye has several published books under her black belt. A transplant from Ohio, she resides with her husband Corey in Jacksonville, Florida, where she tries not to melt in the sun. Find suspense and the unusual at www.BooksByMSK.com.

Nikki Lynn Barrett shares the cover for her October 2014 release, A Masterpiece Unraveled. Take it away, Nikki!   In spring 2014, I introduced readers to Hunter Beckman and Rebecca Lange, two survivors of a tragic accident. Little did I know when I started their story that it would turn into a trilogy…..But it did. And… END_OF_DOCUMENT_TOKEN_TO_BE_REPLACED

The cover below for the New Adult contemporary romance I’ll be releasing September 13 has been hiding in plain sight on my website. My web designers were so excited about the new series they popped that cover right up on my web page. But today, it’s official: the Eruption cover is revealed! I absolutely love how… END_OF_DOCUMENT_TOKEN_TO_BE_REPLACED

Here is the cover for my soon-to-be-released historical romance novella, Little Witch. (A novella is shorter than most novels but longer than a short story. At 49,000 words, Little Witch just brushes the edge of novel-length.) This is the 5th installment in the series and it chronologically follows Vain. If you haven’t read anything in… END_OF_DOCUMENT_TOKEN_TO_BE_REPLACED

Coming March 14, 2013 A tailor’s abandoned daughter fashions a vain nobleman’s tunic, finding passion between the neckline and hem as misfortune forces her into his precarious aristocratic world. END_OF_DOCUMENT_TOKEN_TO_BE_REPLACED