As we all know, first impressions can make or break a relationship, so it occurred to me that the initial meeting between characters in a book might be an interesting theme to explore.  I’m calling it First Sight Saturday.  I’ll start off with the first meeting in my first book between the hero, David, and heroine, Rochelle.   David knows he and Rochelle are to be betrothed today, but Rochelle’s mother, who abhors conflict, has never informed her daughter of the reason for the emperor’s summons.  Rochelle has no idea a man is coming to fetch her at all, much less that he expects to inhabit a very important position in her life.

David turned his head as the noise from the door escalated, unsure what he expected to enter his life.  Given her mother’s shocking hair, he didn’t hold his hopes too high for the girl’s appearance, no matter what Theo said.  The need for deception to even get the girl to Aix did not indicate a particularly biddable personality.  Based on the increasingly violent rattling from the latch, she couldn’t even open doors for herself.
He was about to climb the steps to offer assistance when the door finally wrenched open, releasing a storm of muttering about city workmanship and rotten carpentry carried in a whirlwind of deep blue linen.  She all but flung herself onto the narrow staircase.  Not exactly light of foot nor entirely graceful, she rushed down the stairs, noticing his presence in time to abruptly stop on the bottom step.
She stared at him.
From across the room he could feel the chill of cold caution.  Even so, his concern about her looks evaporated.  She stood taller than her mother, clear skinned, with eyes of a soft green. The gold circlet on her head held her veil neatly in place, covering what it was intended to cover. An unexpected desire to see the color of her hair shot through him.  He could only approximate it from her eyebrows:  not quite brown, but certainly not red either.  And her female attributes remained a mystery to him as well, hidden under layers of varying shades of blue, though a heavy gold girdle studded with aquamarines suggested narrow hips.
“Mother?” she queried, his careful study of her obviously unnerving.  David reluctantly turned to Marian, who, it appeared, had been watching him stare at her daughter.  A small smile quirked her lips.  Her tightly clasped hands now lay on her chest as if in prayer.  She did not find her voice until David cleared his throat expectantly.
“Rochelle!” she said too loudly.  “Theophilus, the gentleman who has helped us so much, sent this burly young man to escort ye to yer audience with the emperor.  He is called David.  A Bavarian, no less!”
David raised his brow at her rather obtuse explanation of his role in the upcoming event, but Marian gave him a slight warning shake of her head.  Well, if the woman hadn’t the courage to tell this girl the truth of the matter, he certainly did.  He didn’t know much about getting along with women, but he guessed that starting his marriage with deception – and necessarily short-lived deception at that – could not be wise.
As he opened his mouth to explain exactly who he was, Rochelle spoke, “I do not see why I need an escort.  I found the palace yesterday.”  She lowered herself off the last step and strode toward him with a confident swing of her arms.  “But if Theophilus wants to share his guard, so be it.”
Marian bobbed her head.  “It was quite thoughtful of him.”
David held up a hand.  “I am not Theo’s guard.  And did you just suggest you were wandering about the city yesterday?  Alone?”
Rochelle studied him assessingly.  Yes, assessingly was the only word for it and God help him, she was lovely up close. Her not brown, not red brows arched over green eyes flecked with hazel. A dusting of freckles decorated a thin nose that flared pertly at the nostrils.  Her soft pink lips were slightly parted exposing straight teeth.
“Not alone.  Our servant, Gilbert, was with me.”
“Gilbert, the bag of bones who opened the door?” David scoffed.  “He could not keep a street rat away much less a pack of thieves.  From this day forth you will not leave here without an able-bodied man at your side.”  She smelled nice.
Rochelle placed her hands on her hips, pleasantly outlining a slim waist beneath her clothing. “What has given you the idea you can make pronouncements such as that to me?  I will go where I wish, when I wish, escorted or not, as I wish!”  Her chest heaved a bit and there were breasts under that tunic, he could tell, and damn it when was the last time he’d lain with a woman?  He mentally bridled himself.  First, betrothal.  Betrothal was the task set before him today and it was time to attend to that task.
He stepped forward, purposely crowding her and letting his hard gaze bore into her fiery eyes, daring her to challenge him.  “I will tell you what gives me the right –“
Marian made a strangled sound before finding her words. “Ye should be going!  It will not do to be late to the palace.”
Rochelle eyed first him, then Marian, before backing away to grasp her mother’s hands.  “Mother, I do wish you would reconsider.  Certainly the nobles have forgotten your circumstances by now.  Father would want you to have the honor of meeting Charlemagne’s son.”
Marian laughed a bit shrilly.  “No, that is no place for me.  Ye shall have the glory today, daughter. Here is your cloak.”  She kept babbling as she closed the gold and aquamarine clasp at the neckline of the pale blue garment.  “David will keep you safe.  Do as he says, my dear.  He is in charge of you today. And possibly tomorrow.”
Rochelle chortled.  “Mother, do not be ridiculous.  This will be over in an hour or two and then we are going home!  Home, where I also do not require an escort!”  She fixed David with a significant look before she walked to the door, wrenched it open with relative ease, and stepped onto the street without him.
So begins a volatile relationship between David and Rochelle in Unbidden which is also available at a bargain price as part of the Evolution Series Bundle. 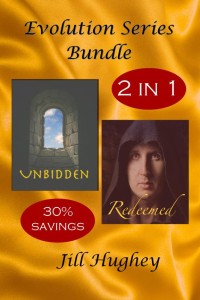 My Next Big Thing I’d like to thank Stacy Juba for inviting me to participate in a fun blog idea.  A wide variety of authors are answering questions about their current works-in-progress which is a great way for readers to find new writers to enjoy and get the scoop on upcoming books they don’t even know they… END_OF_DOCUMENT_TOKEN_TO_BE_REPLACED