I just love the clever title of this romantic comedy by Lois Winston, Talk Gertie To Me.  And you will never guess who Gertie is!  Read on…. 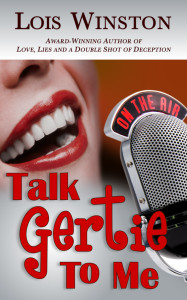 Back in the early days of historical romance, most heroes were what I would consider promiscuous or, at the very least, constantly sexually active.  The hero’s pattern is interrupted when the oh-so-virginal heroine arrives on the scene and in his heart.  He is suddenly repelled by the offerings of the barmaid he has tumbled regularly… END_OF_DOCUMENT_TOKEN_TO_BE_REPLACED

Welcome to Sydney Jane Baily who shares a first meeting from her 5-star historical romance An Improper Situation. Sydney is giving away a free eBook to a lucky commenter so make sure to let us know you were here.  Read on for the setup and the excerpt. SET UP: I like to begin my stories… END_OF_DOCUMENT_TOKEN_TO_BE_REPLACED

V in Brody One of the really fun parts of being an indie author is cover design.  Since I write full-length novels, I do not get to have this fun very often.  I’ve done some covers myself but for my next release, Vain, I am having one designed by Rae Monet.  While choosing pictures and colors… END_OF_DOCUMENT_TOKEN_TO_BE_REPLACED

AUTHOR’s EDIT OF POST I have been educated by a few very generous authors that what I had below were probably tag lines – not complete enough to be log lines.  So, here are a few more appropriate log lines to consider while I go do more learnin’.  I have numbered them so that I… END_OF_DOCUMENT_TOKEN_TO_BE_REPLACED

Today I welcome E. Ayers with her sweet contemporary romance, A Love Song in Wyoming.  Wyoming is my favorite state in the U.S.A. and I love music so I am really happy to share this first meeting between her characters! The Setup:  Johnny Rockthorne is one of the top country/western vocalists. He spends most of his… END_OF_DOCUMENT_TOKEN_TO_BE_REPLACED

As you can see on the left (at least until I remove the widget), I’ve let Rafflecopter choose the winner of the Name That Holiday Tune contest.  I’ve emailed the winner to see at which bookseller she would like to have $20 to spend!My goal for the contest was to increase my followers in my… END_OF_DOCUMENT_TOKEN_TO_BE_REPLACED