Today I welcome Tina Donahue for a special installment of First Sight Saturday – on a Tuesday! Tina was kind enough to help me out with my cover reveal last week, so I’m returning the favor today with her story, Make Me Surrender, part of the “Brought To His Knees” boxed set. Based on the cover, I don’t think any of these men are kneeling in prayer. Tina’s fun fact is that she is a true chocoholic, and she is never giving it up! 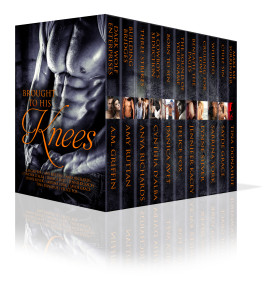 SETUP OF THE SCENE:

She has a proposition…to win their attention, passion, hearts.

For over a year, Mercy’s had her eye on Travis and Dutch, two of the hottest guys on the Oregon coast. Dark and dangerously virile, Travis owns a saloon that caters to bikers. Dutch looks like one, right down to his impressive tats, and operates a motorcycle repair shop on the premises.

When a position opens in the saloon’s kitchen, Mercy sees a way to be near these sinfully sexy men, wanting the job and lodging, her cabin snuggled between theirs. This is the scene when she arrives to move in to the property.

She forced herself to take a deep breath and held it as the greenery opened up, showing the southern end of the old motel’s property.

Mercy wanted to throw up. The only time she’d seen this place was at night when she’d had the courage to drive by quickly and unnoticed. Afraid if Travis or Dutch saw her, they might think she was stalking them.

The pickup rounded a bend. Nestled within the monstrous trees were a series of rustic cabins, their construction simple, square footage modest. They stood on either side of the largest structure, surely four times their size. It had a bold sign over the door, marking it as Smooth Rider Saloon. To its right was the motorcycle repair shop, its sign less impressive.

The guys’ pickups were parked in front of cabins Mercy guessed belonged to them. She didn’t see either man on the grounds.

Jill pulled onto the expansive front lot. Gravel crunched beneath the pickup’s tires and pinged against its undercarriage. She elbowed Mercy. “Look.”

Her heart leapt. “What?” She pushed up in her seat, expecting to see Dutch and Travis striding toward them.

The only thing that moved was the thick foliage stirred by the gentle breeze.

“That cabin. Way over there.” Jill pointed.

It was snuggled in trees and shadows, no signs of life around. “What about it?”

Mercy barked a nervous laugh. “Only if they don’t invite more than one other person besides themselves. Look at how small it is.” She recalled how big Travis and Dutch were. Sweat prickled the back of her neck.

“Maybe they do it outside,” Jill said.

Or in the saloon after hours. Before Mercy lost her nerve, she left the cab and headed for the building, her cowgirl boots stirring up small whorls of dust. Shading her eyes against the lowered sun, she regarded the saloon’s windows, half-expecting to see Dutch and Travis watching her.

Disappointment and uncertainty knotted her stomach. She motioned Jill over and whispered, “Are we early?”

“Do you think they forgot?” Already? Barely six hours had passed since she’d propositioned them.

“They wouldn’t do that to you,” Jill assured, rubbing Mercy’s back. “Why are we whispering?”

Mercy felt like an unwelcomed intruder. As though she’d stumbled onto the guys while they crawled all over another woman.

Aw crud, they couldn’t be with someone now, could they? That would be too awful. She’d never recover from that humilia—

Her thoughts halted at the sound of footfalls. Not on gravel. On wood.

Like a well-rehearsed dance team, Mercy and Jill turned to the left. Beyond the saloon was a cabin Mercy hadn’t noticed. Travis and Dutch crossed its brief porch, filled trash bags in each hand, their chests tantalizingly bare.

Mercy leaned into her friend for support, dizzy at the sight of all those male muscles.

There’s plenty more lustiness, but I try to keep this blog rated PG, so go grab a copy of the “Brought To His Knees” boxed set for as much steam as you can handle! You can find it at almost any retailer you can think of, linked below.

If you’d like to learn more about Tina Donahue, visit her at these sites.

Tina and I both welcome your questions and comments. Come back this Saturday for another first meeting excerpt!